For those enamored of the romance of the artifact, the packaging for Unconscious Collective’s new double LP, Pleistocene Moon—the jazz-rock trio’s second lengthy opus for Dallas-based indie Tofu Carnage—is striking enough to be worth the price of admission all by itself. Artist Ginger Berry’s cyanotypes, tintypes, and photographs are dark, moody, and highly evocative. Their inclusion underscores the tactile immediacy of Unconscious Collective’s music, which is rich in sonic detail and rooted in the spontaneous communication between players.

The record opens with the sound of wolves howling; Unconscious Collective guitarist Gregg Prickett lives with three of them. And that’s not the only unusual thing about the band. Besides Mr. Prickett, the band—which last visited New York in 2012 for a well-received show at the metal venue St. Vitus—also includes bassist Aaron Gonzalez and his brother, drummer-vibraphonist Stefan Gonzalez. The three musicians appear onstage in tribal ritual costuming, including face and body paint, which recalls the Association for the Advancement of Creative Musicians, Native America, psychedelic culture, or black metal, depending on your perspective.

The band’s costuming “wasn’t originally part of some grand plan,” said Aaron Gonzalez. “We wanted to add a celebratory visual aspect to make our shows a happening.” But then, he said, the presentation took on a life of its own. “When we perform, we want to get into a zone that’s more intense and involving than everyday communication. Dressing as we do [onstage] helps us to reorient ourselves to make the moment magical. Even before we touch our instruments, we’re thinking about the art we’re going to create.”

Aaron and Stefan grew up in Oak Cliff—the storied district of Dallas where Lee Harvey Oswald was arrested, now a resurgent arts mecca—in an environment that nurtured creativity. Their father, Dennis Gonzalez, is a modern-day Renaissance man: trumpeter-composer, visual artist, writer and educator. The Gonzalez family was frequently visited by his collaborators like AACM alumni Alvin Fielder, Malachi Favors, and Don Moye, and also played host to all-ages punk shows after the brothers, while in their early teens, formed their still-active thrash metal duo, Akkolyte.

In 2001, the Gonzalez brothers coaxed their father out of musical retirement to play with them in a free jazz trio, Yells at Eels, which has toured the world and made numerous recordings. They have also played together in Portuguese guitarist Luis Lopes’ Humanization Quartet. Aaron is a regular participant in the North Texas experimental music scene. Stefan has a solo grindcore/performance art project, Orgullo Primitivo, and recently returned from a tour of Europe as a member of bassist Ingebrigt Haker Flaten’s fiery Chicago-Texas free jazz/hip-hop unit, the Young Mothers. Aaron’s deep sound on bowed or plucked upright recalls Charlie Haden, and his pizzicato fluency translates well to the electric bass. Stefan does much more than groove and swing with whirlwind intensity; indeed, he can match a melodic soloist phrase for phrase on the traps.

Unconscious Collective began a decade ago as a home recording project of Stefan’s, which included other musicians but ultimately stabilized with the core unit of the Gonzalez brothers and Mr. Prickett, an Oak Cliff neighbor before moving to Chicago for five years. Since returning to Dallas in 2007, the guitarist has also played jazz in his own Mingus-influenced band, Monks of Saturnalia; garage rock in North Texas underground mainstay Wanz Dover’s Black Dotz; and black metal in Dead to a Dying World, the band led by Tofu Carnage impresario Sean Mehl. (Stefan Gonzalez is a former member.) Mr. Prickett’s guitar style combines a dark, warm tone with classical facility, aleatoric adventurism, and seamlessly integrated electronic effects.

The trio has several connections with legendary Fort Worth drummer-composer-bandleader Ronald Shannon Jackson. Stefan Gonzalez studied informally with Mr. Jackson after looking up his number and introducing himself by phone. Mr. Prickett was a member of the final incarnation of Mr. Jackson’s band, the Decoding Society, which played the drummer’s last live concert in 2012. Both men performed at Mr. Jackson’s memorial service in Fort Worth last year. Ex-Decoding Society violinist Leonard Hayward occasionally joins Unconscious Collective on hometown dates, and the band has included Mr. Jackson’s composition “People We Love” in its live set.

Released in 2012, the debut album, Unconscious Collective, was a desperation move of sorts. “We went into the studio with three songs written, and improvised the rest,” Stefan Gonzalez said. “We had been on semi-hiatus and weren’t gelling, but having the pressure on us worked to our advantage.” Since then, he said, “We’ve developed a bleaker vision of the world … and vicious chops.” He considers Pleistocene Moon “the ultimate artistic statement for all three of us.” And indeed, while improvisation remains the band’s forte, it’s the new album’s compositions that really shine.

Eschewing the genre-ification of music, these musical omnivores, to paraphrase Oliver Lake, want all of their metaphorical food on the same plate. Over Pleistocene Moon’s four sides, you can hear the title track’s doom metal waltz, replete with mellotron, leading into an expansive showcase for Mr. Prickett (“Tribe Apini”), in which the guitarist splatters dense clots of notes over the canvas of a relentless ostinato while the drums shadow him at every turn. Flip the record over to experience the plaintive lyricism of the ECM-ish “Requiem for Biodiversity” (featuring the soul cry of Mike Forbes’ tenor sax) giving way to the thunderous prog rock gallop of the 12-minute, through-composed “Kotsoteka,” a track that’s thematically linked to the debut album’s “Peneteka”—both were inspired by the Native American genocide.

On Pleistocene Moon’s second disc, “Is the Spine the Dividing Line” spotlights the drummer’s hyperactive subdivisions of the beat over, around, and through—but definitely not behind—his bandmates’ staccato interaction, while “Methane Rising” is a freeblow free-for-all, with Mr. Forbes adding to the mayhem. (The saxophonist, currently of Tiger Hatchery, has co-led trios with Stefan Gonzalez and Weasel Walter. He’s a powerfully passionate presence, and Pleistocene Moon’s secret weapon.) On the final side, “The Transformation of Matter” opens with a burst of elemental sound, like late Coltrane with Mr. Forbes in Pharaoh Sanders’ role, then alternates between a Venusian processional and more free-flowing expositions. “Greedy Tongue” closes the album with an aura of dark mystery, electronic noise and the sounds of scraped strings intermingling with dimly overheard voices.

Unconscious Collective was unable to tour this summer, after Aaron Gonzalez underwent back surgery. They intend to remedy that in the spring of 2015, when their touring plans include a return to the Apple. “For what we do,” he said, “it’s important to play New York.” 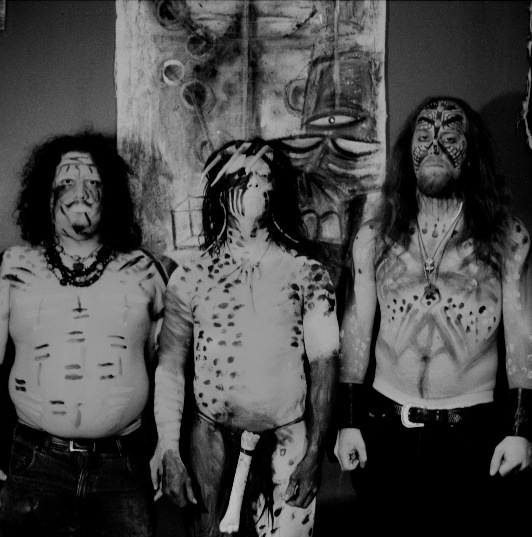