Ozzie Nelson, his wife Harriet and their sons, David and Ricky, are all gone now, but from 1952-1966 they were TV’s picture-perfect American family—iconic, idyllic, comfortably isolated from life’s grim, ugly realities by a white picket fence.

After 436 episodes, they called it a series and transitioned into mythic figures, just as a conflict was heating up in Southeast Asia that redefined the American home.

The Nelsons didn’t penetrate the 17th parallel till Sticks and Bones, when playwright David Rabe hijacked them in order to make a black-comedy point: What happens when David returns to the insulated family fold, blinded by battle, raging with what later became known as PTSD (post-traumatic stress disorder) and accompanied by an Asian ghost only he can see and bed? When the family priest attempts to place his healing hands on the soldier, he gets whacked with a walking stick.

“I was looking for American archetypes to present and unravel like the play does,” Mr. Rabe said of what you can call The Further-Out Adventures of Ozzie and Harriet. “I started with them for that reason, and it never occurred to me to use anyone else.”

Sticks and Bones’ first New York revival is kicking off the 20th anniversary season of The New Group, and they’ve hired a whole new hall on West 42nd Street to do it in: The Romulus Linney Courtyard Theater at The Pershing Square Signature.

The Ozzie of the occasion is a very well-cast Bill Pullman, who once upon a time made a perfectly good case for falling in love with a goat (in Edward Albee’s The Goat, or Who is Sylvia?). Here, he twists his goofy good looks into a standard-issue sitcom dad and wades deep into billowing silliness.

“It’s strange he can do that with his face,” said Mr. Rabe, marveling at Mr. Pullman’s sleight-of-face tricks. “Truth is, if you see him objectively, he’s a leading-man type.”

As befits a homecoming play, wife Harriett and their benignly ineffectual priest are played by Holly Hunter and Richard Chamberlain, both of whom have been absent from the New York theater scene way too long. Directed by Scott Elliott, artistic director of The New Group, Sticks and Bones is now previewing for a November 6 opening.

“Scott thought it would be interesting to have the priest older, and I think Richard just wanted to be in a play like this at this time with this language,” Mr. Rabe observed. “If it was a priest, fine—but I don’t think that it was the idea of a priest exactly as much as being in with these actors and Scott and this play at this time.

“Holly’s a really inventive and committed actress, just working all the time, trying to figure out these moments—where they should happen and where she should be, and is this the right time to lift the cup? She’s very, very passionate about getting it specific and coordinating it with everyone else—a very disciplined stage actress.”

To see these characters he created galloping back at him four decades later was, to say the least, disconcerting for the playwright. “I don’t know how to say it simply. It’s a rich experience and a strange experience. I’m encountering the characters along with my earlier self. It’s bringing back both the experience of writing it and the events that it’s based on.

“I always like it when I feel the audience is responding to both the comedy and the more emotional parts … It means that they’re with it, that it’s working, and this production is offering them both. It’s a roller coaster ride for the audience where they’re laughing and then suddenly they’re in another state. They go for the ride, and hopefully they will go home and they will think about what they saw.”

That’s a pretty safe bet. Since we don’t exactly live in peacetime these days, there’s a sad, unshakable resonance to this 43-year-old play. “It’s vets coming home, different in the sense that they’re not draftees, but they’re clearly having a hard time. From what I understand, the suicide rate is higher than it’s ever been among vets. These guys are going off on these deployments over and over again. Some of the soldiers I was with went back to Vietnam, but you kinda had to volunteer to go back.”

Mr. Rabe’s own Vietnam experience consisted of a year in Long Binh. “I was in a medical unit. You’re trained, up to a point, to shoot a gun. I did guard duty. When the Tet Offensive came, which was a year after I was gone, that place really got hit.”

His own adjustment to civilian life didn’t come easily. “It’s hard to sort it all out, and it took me a while,” he conceded. “I didn’t have the kind of experience over there you’d objectively think would lead to a lot of obsessed stress, but I was stressed—yet I also functioned and went to school and wrote. Playwriting certainly helped a lot.

“I was home a few months before I went back to grad school. Villanova, at that time, had a very creative theater department. I’d been there a while when a teacher said, ‘You must have something to write about, having gone over there.’ So I started. That’s the way it went. I thought I wanted to write a novel, then I wrote these plays.”

“These plays” were his Vietnam trilogy—The Basic Training of Pavlo Hummel, Sticks and Bones and Streamers. The first two are the only Vietnam plays to appear on Broadway while the war was raging, and this was largely the doing of Joseph Papp, the pit bull producer who first gave them life at his Off-Broadway venue, The Public.

“Joe was a dynamo,” recalled Mr. Rabe. “I believe the plays would never have been done if he hadn’t been there. Sticks and Bones and Pavlo Hummel had both been turned down a lot of places. Then, when I sent it to him, he took them on. I think he was looking for something that addressed the subject of Vietnam. He was a force to be reckoned with, and I was lucky enough to have him take me under his wing.”

Pavlo won Al Pacino a Tony, and Sticks and Bones won one for its Harriet, Elizabeth Wilson—plus a nomination for its Oz, Tom Aldredge. It also won the Best Play Tony.

That year, “There were some very, very heavyweight playwrights in that category,” and by that Mr. Rabe meant Neil Simon (The Prisoner of Second Avenue), Harold Pinter (Old Times) and Robert Bolt (Vivat! Vivat Regina!). “I was thrilled to be there, but I just didn’t think I could win.” He believes the topicality of Vietnam helped push the Tony his way. It’s still the only time Broadway acknowledged that war with an award. 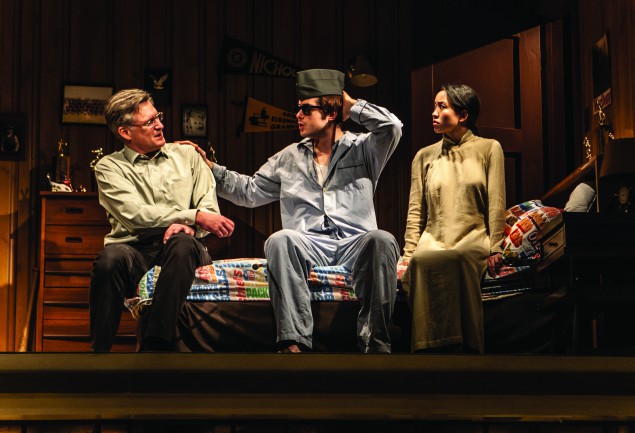