The great state of Texas has a GDP equal to that of Spain and the same hot, arid climate as that nation, but the similarities don’t end there. The Lone Star State’s frothing political class would have worked well with the Inquisitors and fascist Generalissimo Franco.

Last week, the pack of cowboy-Taliban goons led by the absurd but dangerous Gov. Rick Perry were celebrating when a New Orleans-based federal appeals panel upheld their right to kick their state another century backward by effectively removing access for almost a million Texan women to exercise their legal right to decide whether or not to bear children if impregnated.

Under the insulting guise of “protecting women’s health,” the legislature last year passed HB2, forcing abortion clinics to adhere to hospital-level building and safety codes that are both medically unnecessary and fiscally impossible. They also required doctors to have hospital admitting privileges, another hurdle that is both unnecessary and difficult to overcome. Under the law, abortion clinics must operate as ambulatory service centers, or “mini hospitals.” To comply, they must construct ventilation systems that are hospital grade and certain size rooms for operation and adhere to specific widths for hallways and parking lot space.

These requirements have nothing to do with women’s health—only half of a percent of abortions performed in the U.S. have complications that require hospitalizations—and everything to do with shutting down clinics. It’s working.

We saw this coming last year, when HB2 squeaked into the world, in the dark of night, after a heroic filibuster led by the courageous Wendy Davis, now running for governor.

While the state’s leaders have been preoccupied with what they pretend is the very worrisome public health crisis of women taking care of their own private bodily business, another actual public health crisis was blowing up in their faces. In Dallas, emergency room nurses and docs sent an Ebola-infected man home to barf up his deadly virus all over an apartment in the middle of the city for three days.

After the sick man finally got hospitalized, local health officials delayed cleaning the apartment and failed to care properly for the four people quarantined inside. The delay was blamed on “confusion and conflicting guidance over state and federal permits,” according to reports.

“This has been a paperwork nightmare,” Dallas Mayor Mike S. Rawlings said.

The man has since died and 48 people are being monitored.

Now, if my name was Pat Robertson, I might say God sent Ebola down to Texas as punishment for giving the nation W and trampling on women’s rights. But I’m not Pat and I won’t go there.

What I will say is that the people of the state of Texas deserve better than craven leaders so beholden to the extremist fringe’s hold on the Republican Party that they will play Russian roulette with actual women’s lives while falling down on the job when it comes to real health care crises.

Texas has huge wealth, and the second-largest population in the nation after California, with 5.4 million reproductive-age women.

We know there are rational beings in Texas. The abortion providers sued and won at the circuit court for the Western District of Texas. A judge struck down the requirement not only as it applied to the two clinics in El Paso and McAllen that had sued, but statewide.

The judge ruled that the hospital admitting-privileges requirement and the surgical-center standards created “a brutally effective system of abortion regulation that reduces access to abortion clinics.”

Then, last week, a Perry-appointed appeals court judge named Jennifer Elrod penned a decision upholding the law. The ruling was immediately disastrous for women’s healthcare. Texas had 41 abortion clinics last year, 21 as of last week and that dropped to eight this week. All are now clustered around four metropolitan areas, leaving one-sixth of the state’s 5.4 million  reproductive-age women without access to their legal right to terminate a pregnancy.

“This is a devastating day for Texas women,” Jennifer Dalven, director of the American Civil Liberties Union Reproductive Freedom Project, said in a press release after the court ruling. “It essentially tells extreme politicians not to worry about medical evidence or a woman’s safety.”

Everyone knows that this outrageousness is idiotic political theater designed to advance the presidential primary aspirations of one of the most nitwitted governors in the nation. The greater shame is that Mr. Perry probably knows exactly what sort of a burden he’s imposed on women. His wife Anita was a registered E.R. nurse and has been extremely active in the fight against domestic violence. She has said she witnessed the effects of violence against women in her years as a nurse.

It seems inconceivable that a woman involved in a core issue of the women’s movement would be “O.K.” with shutting down reproductive healthcare for a million of the state’s females. But, like Laura Bush, that other Texas wife who we know knew better, Mrs. Perry apparently puts hubby’s political aspirations above sisterhood.

Judge Elrod, writing for the Fifth Circuit, wrote that the district court had overreached when it threw out the law. “In our circuit, we do not balance the wisdom or effectiveness of a law against the burdens the law imposes,” she wrote.

She then dismissed the rights of a million women, as a sort of collateral damage to legislative wisdom. “We do not doubt that women in poverty face greater difficulties,” she conceded, admitting that a “large fraction” of women would be affected by the law.

The political columnist Charles P. Pierce, writing in Esquire, pointed out the absurd logical implications of such a casual attitude about the removal of a legal right for a percentage of the population. If 1 in 6 gun owners has their firearms confiscated, Mr. Pierce wrote, under the court’s rubric, that is not an “undue burden” on gun owners, nor is it an undue burden if 1 in 6 criminal defendants are forced to testify against themselves, or denied counsel, or a trial by jury.

This case will now go to the Supreme Court, and the justices may or may not take it on. Women have no reason to expect relief at that level. The highest court already indicated, in its Hobby Lobby contraceptive coverage ruling, that it could give a rat’s ass about women’s rights.

Meanwhile, a prediction for what we can expect during the long waiting period between now and a Supreme Court decision, if one is forthcoming: more Texas women will die during childbirth or from complications due to lack of basic reproductive health care than will ever die of the dreaded Ebola. 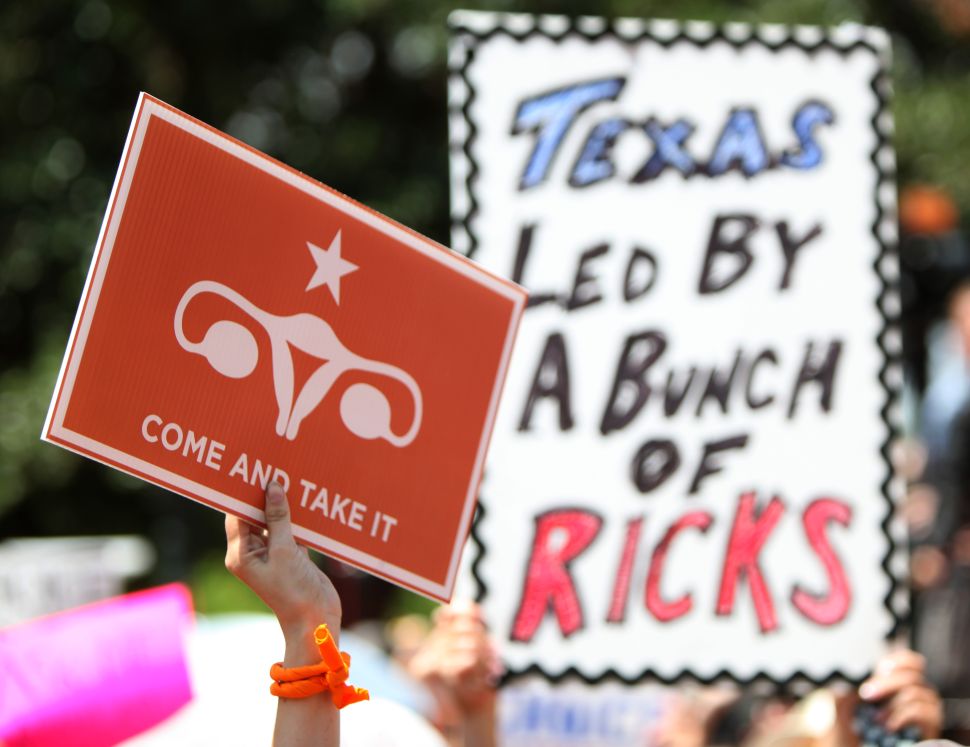