Terrified by the prospect of having kids? You won’t be after watching this insanely cute Kickstarter video for Edwin, supposedly the world’s first interactive rubber duck.

Created by pi lab, Edwin is a high-tech, app-enhanced rubber duck with a variety of uses for parents and young kids — everything from playing lullabies and reading stories to detecting when the bath  has reached the right temperature. The Kickstarter campaign is seeking to raise $85,000 before Dec. 2.

But when it came to Edwin’s Kickstarter page, it wasn’t really the technology that caught our eye. No, it was Finn Inmon, the product’s pint-sized “pitch man” and son of Don Inmon, the company’s president and cofounder.

In the video, the precious Finn adorably demonstrates all the ways Edwin has transformed his life.

Jump to 0:45 for the warmest and fuzziest part of all, when Finn, in the bath with Edwin, tilts his head to the side and says, “Did I mention bath time hasn’t been the same?” before giving the camera a satisfied grin, like he just knows we’re melting on the spot.

If your heart hasn’t swelled enough, jump to 1:08 to watch Edwin comfort Finn during a thunderstorm. “Now that I have Edwin, I look forward to sleepytime, even when there’s a thunderstorm outside,” Finn says. No seriously, Betabeat is ready to be a parent.

The technology itself isn’t the most mind-blowing thing we’ve ever seen. After all, do you really need an app to tell you when the temperature’s okay to enter the bath? It seems like an over-complicated version of just sticking your hand in the . And also, what’s up with these Edwin-branded storybooks? We’re troubled by the way they’re using adjectives in the place of adverbs.

Still, we’re hoping that Edwin becomes a reality, if only so we can see this kid in a national ad campaign someday. 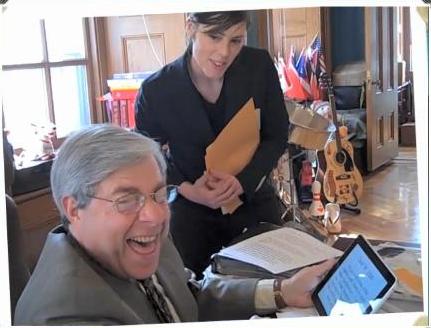