Jean-Claude “Baby Doc” Duvalier, the dictator of Haiti who died of a heart attack in Port-au-Prince this weekend, ruined my life three times.

The first time was very early on. The year I was born in fact. In January, 1971, his father, an odious ruler named Francois “Papa Doc” Duvalier, while on his deathbed, convinced Haiti’s National Assembly to pass a constitutional law which allowed him to bypass elections of any form and appoint his successor. Three months later, in April, 19-year-old Jean-Claude, nicknamed “Baby Doc” for his inability to shed an adolescent’s plumpness, is anointed Haiti’s “president for life” the day after his father died, becoming, quite absurdly, the youngest president of any country in the world at the time.

To prove how immature he was for the job, Baby Doc spent his days sleeping through lectures by tutors on laws and economics, and his evenings speeding Ferraris and other fancy cars through Port-au-Prince. His father’s famously merciless paramilitary goons made sure no one questioned the kid or any other government inanity. By the time I was born that September, my father, who had had his share of run-ins with local government tools, decided a dunce’s rule was the last straw and within a year or so the family left our nest in a tropical paradise to the bitter cold faux European streets of Montreal. We were part of the second wave of thousands of families to immigrate to North America in response to Duvalierism; the first had bailed in the late ’50s and ’60s to escape the rise in terror of Duvalier pere’s rule.

The second time Jean-Claude Duvalier screwed things up for me was in ’86. Around 1980, my father, by then living in New York City, thought another New York winter would be one too many, and we moved back to Haiti. Compared to the anarchy that would characterize Haiti in the late ’80s and beyond, 1980 was a halcyon period. The fat kid’s iron-fisted rule decimated human rights in the country, but stable government allowed certain local industries to flourish. Economic prosperity meant I had a pick of good schools, parties to attend with teenaged insouciance, and the car ride from my school not far from Duvalier’s National Palace to our neighborhood, Carrefour, averaged about 20 minutes on a smoothly paved road along a coastline framed by gorgeous azure seas.

However, decent economics and infrastructure couldn’t hold back the rot of autocracy forever. In 1985, religious groups rose up against Duvalier, demanding his government stop the terror and institute policies to help the poor and not just his rich friends. Baby Doc Duvalier, like moronic dictators since the dawn of time, responded by unleashing his private militia, the sunglasses- and gold-teeth-wearing Tonton Macoutes, on the anti-government protesters. University students joined the anti-Duvalier movement, and by autumn the Tonton Macoutes had killed more than a few of them during increasingly violent clashes.

Leaving my house got dangerous. Going to school in downtown Port-au-Prince became a definite no-no. After a year of de facto house-arrest as Duvalier’s government seemed to try to kill every protester across the country, my father pressed the eject button again. In early ’86, I found myself going to school in bitter cold Brooklyn streets. The color of the ocean when viewed from the D train as it crossed the bridge into Manhattan was sludge.

Thanks for nothing, Baby Doc.

In ’86, Duvalier got his comeuppance. But only partly. The anti-government forces soon took the upper-hand, but right before they could grab the cherubic Ferrari-lover and his free-spending trophy wife, an American military plane whisked Haiti’s First Family to the safety of the south of France. The south of France! No joke.

On their final night in power, Duvalier and his wife Michele threw a party. They had friends over and a few toasts of champagne, then they slid into a BMW for a ride to the airport where, after another ceremony, they climbed aboard a U.S. Air Force C-141 cargo plane and flew to France. Their retirement funds in secret Geneva bank accounts were estimated to be around $400 million. The reviled young couple settled into a villa in Mougins, a town in the hills above Cannes, bought a chateau outside of Paris, and tooled around the French Riviera in a Ferrari Testarossa and a BMW.

Why did Ronald Reagan waste a thimble of American jet fuel on Jean-Claude “Baby Doc” Duvalier? Therein lies one of the great international relations mysteries of the last 30 years with implications for headache-inducing challenges we face today in Syria, among others. Duvalier was the sort of strongman Washington and Paris adored and supported post-World War II across the Caribbean, South America, Africa, and the Middle East. Duvalier’s peers included Mobutu in Congo, Mugabe in Zimbabwe, Mubarak in Egypt, Saddam, Qaddafi, and the Assads. Like with many of those kingpins, Washington has been bedeviled by how to manage the après-despot.

To wit, a military junta took over Haiti post-Duvalier. After it allowed popular elections to take place in 1990, it quickly soured on the winner, Jean-Bertrand Aristide, a Catholic priest and fierce leader of the anti-Duvalier movement. Aristide’s political career in Haiti would be comically absurd if the country’s health had not plunged terribly since. Six months after he was elected to the Haitian presidency, the first popularly elected president of the republic in 50 years, with a Mandela-like popularity and mandate, the military, with Washington’s OK, kicked Mr. Aristide out of office.

Four years later, Mr. Aristide somehow lobbied President Bill Clinton into restoring him to Haiti’s presidency, and Mr. Clinton, like an old school colonial emperor, made it so. Accompanied by a cavalcade worthy of the movie Apocalypse Now, the US government reinstalled Mr. Aristide in 1994. Understandably paranoid after these events made clear the people ruling Haiti have nothing to do with the Haitian people, or his policies, Mr. Aristide becomes a lousy president. In 2004, after, according to The New York Times, fomenting and arming a rebel group, George W. Bush ejected him from office. In those lean days, there would be no villas in the Riviera waiting for Mr. Aristide. Mr. Bush gave him a one-way ticket to the wretched Central African Republic.

Mr. Bush replaced Mr. Aristide with, of all things, a force of over 10,000 United Nations peacekeepers. Rene Préval, an unassuming former agronomist, would serve as president of Haiti in a now purely figurehead role with the number one task of never bad-mouthing the United Nations or Washington.

The domination of the United Nations Stabilization Mission in Haiti (MINUSTAH) has had some positive results. Haiti’s GDP has grown from $342 million in 1985, the final year under Duvalier, to $8.4 billion in 2013, pretty much doubling from 2004, the year the UN took over. Keep in mind, Haiti is the second most populous country in the Caribbean, with a population of 10 million. Cuba, a stone’s throw north of Haiti with only one million more people and a dictatorship and trade embargo with the US of more than a half century, has a GDP of $68 billion. Tiny Jamaica (pop: 2.7m), just south of Haiti, has a $14 billion GDP. The Dominican Republic, Haiti’s tetchy Spanish-speaking, island-sharing sibling, has a $60 billion GDP.

Needless to say, Haitians despise the mass suffering this miserly growth rate engenders. Many Haitians have begun to question the United Nations’ mission, especially after a massive earthquake on Jan. 12, 2010 effectively razed Port-au-Prince and another city Léogane, killing around 300,000. [Full disclosure: I worked as a consultant to the United Nations’ emergency response operations in Haiti after the quake.]

Since then, Haitians learned UN peacekeepers accidentally brought a strain of cholera from Nepal to Haiti, and the UN carelessly allowed the cholera to enter the country’s waterworks. The disease has killed 8,500 people and counting. Irony of ironies: the United Nations mission has an annual budget of $500 million for its 5,145 soldiers and 2,377 police officers in Haiti, but it can’t raise $38 million to cure Haitians of a disease it added on top of the awful infrastructural and economic ravages wrought by the earthquake still hobbling the country. To legal and public claims for compensation against the UN, the UN took the rare step of invoking its legal immunity, citing a convention laid down in 1946. What else could the government of Haiti do? “Make” the UN leave or compensate cholera victim? It can’t. Haiti no longer has an army, and much of its police force perished in the earthquake. “International law” itself is against them.

Which begs the questions: When does an international mission to “stabilize” Haiti turn into a mission that quarantines and sterilizes the country?

The current president of Haiti, Michel Martelly, a former lounge singer, has been mum on the subject. His biggest initiative has been to promote tourism to Haiti, as if to say, come see how Haiti is improving since the earthquake. Fair enough. The gathering storm against him, however, along with frustrations with the UN, has been growing protest against his refusal to hold legislative elections. He has been running the country without any checks and balances on his power, something predecessors like Aristide wouldn’t have dreamed of, and Préval wouldn’t have dared. And something Washington would normally never allow. One reason Mr. Martelly, a charming rogue, got away with sliding towards autocracy the last couple of years has been none other than the presence of Jean-Claude Duvalier.

In 2011, Duvalier slipped back into Port-au-Prince unannounced to quietly live out his years. Rumors were he was dying of some unknown disease. He said he was merely homesick. Either way, his presence energized Haiti’s human rights community. Since just about any adult above the age of 50 who hadn’t been in his or his father’s employ could claim Duvalier and his goons terrorized, illegally jailed tortured or exiled them, the courts allowed a prosecutor to ignore any statutes of limitations and go after Duvalier. Washington looked the other way. Duvalier, glamorously evil, was a good buffer for Mr. Martelly. I was planning to visit Haiti in the next couple of weeks to interview Duvalier and the under-funded human rights lawyers trying to bring him to justice for the crimes of his 15-year-rule and illegally well-funded 25-year French getaway.

Everyone felt the time for a bit of justice in Haiti was near. Yesterday, Duvalier, without notice, died of a heart attack in his sleep in a bed in house in the lovely hills above Port-au-Prince. In death, he cheated Haitians of justice, and me of my story. In his champagne-popping, luxury-car-driving 63 years of privilege, Duvalier never had to taste a bitter New York winter.

Haiti will have to look elsewhere for a break.

Dimitry Elias Léger’s novel God Loves Haiti is available for pre-order online and will be in stores on January 6. 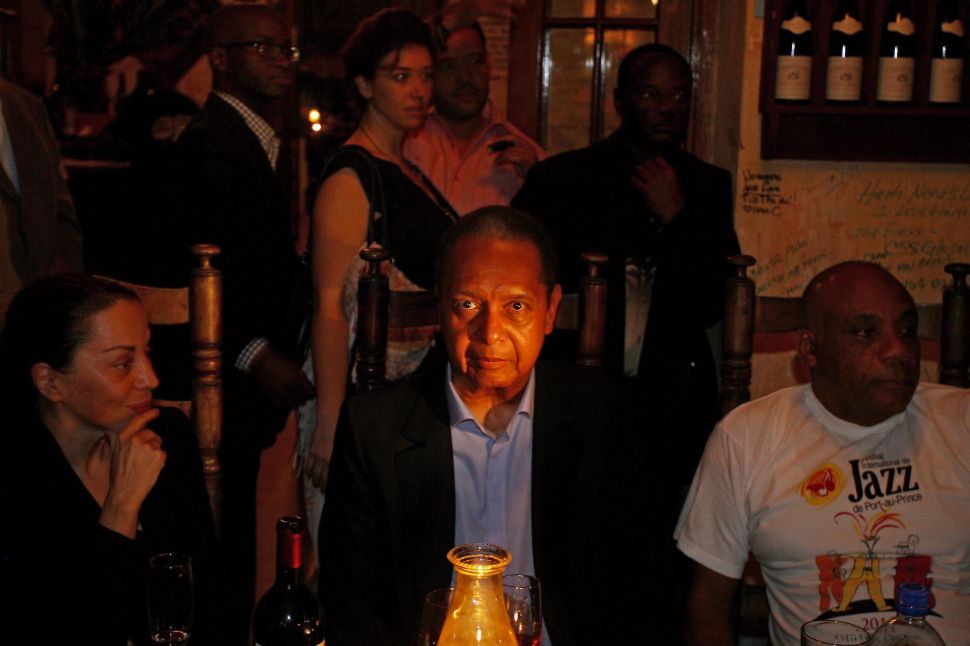