Amazon reviewers are savaging Gov. Andrew Cuomo’s new memoir en masse, overwhelmingly rating the political tome one star out of five–with one nasty reviewer even comparing it to Adolf Hitler’s “Mein Kampf.” Out of the 428 reviews posted as of this morning at 10:30 a.m., a startling 387 have slapped Mr. Cuomo’s book with a one-star review.

In one brief review titled “Should be called ‘Memoirs of a Tyrant,'” a reader said Mr. Cuomo’s memoir was suitable for “range fodder.”

“This book is only suitable for range fodder. No one should be interested in reading the memoirs of New York’s petty tyrant leader,” the reviewer wrote. “His real legacy is one of corruption, lies, and disregard for the civil rights of the people he was elected to serve. This book, like his governship [sic], will tank…”

Another reviewer wrote: “If you liked Mein Kampf, you’ll love this.”

“The life and times of Little Mario, from “Vote for Cuomo, not the Homo” to totally losing his s*** during his 2013 State of the State Address, finally closing with the realization he will never be President,” the review continued.

Amazon criticism for Mr. Cuomo and his memoir “All Things Possible: Setbacks and Success in Political Life” appeared to come more from the right than left. A one-star write-up all but copy and pasted Republican rival Rob Astorino’s campaign platform into a review, savaging the Democratic governor for his “failed policies and practices.”

“This work is a narcissistic apologetic review of failed policies and practices that might have helped him rise to Governor, but as Governor, lead the state as it slides to the bottom of the barrel,” the reviewer, who identified himself as Ken Barlow (also the name of a television character from a soap opera), wrote.

“The book doesn’t go into detail about why the Governor refuses to investigate Speaker Sheldon Silver’s use of public money to pay off a sexual harassment claim. Frankly, the book doesn’t go into any of the scandals currently smoldering in New York State, it merely is a historical hand job, ghost written and with possibly the worst cover photo in recent memory,” he added.

Several reviewers assailed Mr. Cuomo–a fiscal centrist who has alienated some liberals– as a “socialist.” A sizable chunk of the critical reviews seemed like they could have been written by Astorino campaign aides or volunteers.

“I’m shocked Amazon would sell this book while Cuomo is under investigation for corruption by U.S. Attorney Preet Bharara,” wrote one one-star reviewer, referring to Mr. Cuomo’s controversial disbanding of an anti-corruption commission and the resulting federal investigation into the commission’s demise. “A better and more realistic cover photo would be Cuomo working the puppet strings of key NY Legislators while screaming orders at them.”

Mr. Astorino’s camp denied they were fueling the Amazonian wrath.

“It happened organically, before we even knew about it,” said Astorino spokesman Bill O’Reilly. “I wrote one only after a couple of hundred were already on there. I haven’t looked in a couple of days.

Eleven five-star reviews–some of them ironic–did roll in for Mr. Cuomo’s book. One effusive reviewer called it a “thoughtful, honest and compelling memoir.”

Other recent political memoirs were treated more charitably. Senator Kirsten Gillibrand’s new book “Off the Sidelines: Raise Your Voice, Change the World” boasts an average rating of four stars, though only 32 people bothered to review the much-hyped memoir. Even the memoir by the polarizing Christine Quinn, released during her failed bid for mayor last year, averaged four-and-a-half stars, though only three people reviewed the book.

The vitriol toward Mr. Cuomo is not confined to the internet. His book signing on Wednesday drew as many irate protesters as it did starry-eyed fans. Many people waiting in line oddly refused to speak to reporters about why they were there.

The memoir, released weeks before Mr. Cuomo faces re-election against Mr. Astorino and Green Party candidate Howie Hawkins, boosted Mr. Cuomo’s public profile. He sat down for a series of rare television interviews and interacted with voters in-person at a Manhattan Barnes and Noble.

Spokespersons for Mr. Cuomo and his publisher HarperCollins did not immediately return requests for comment. 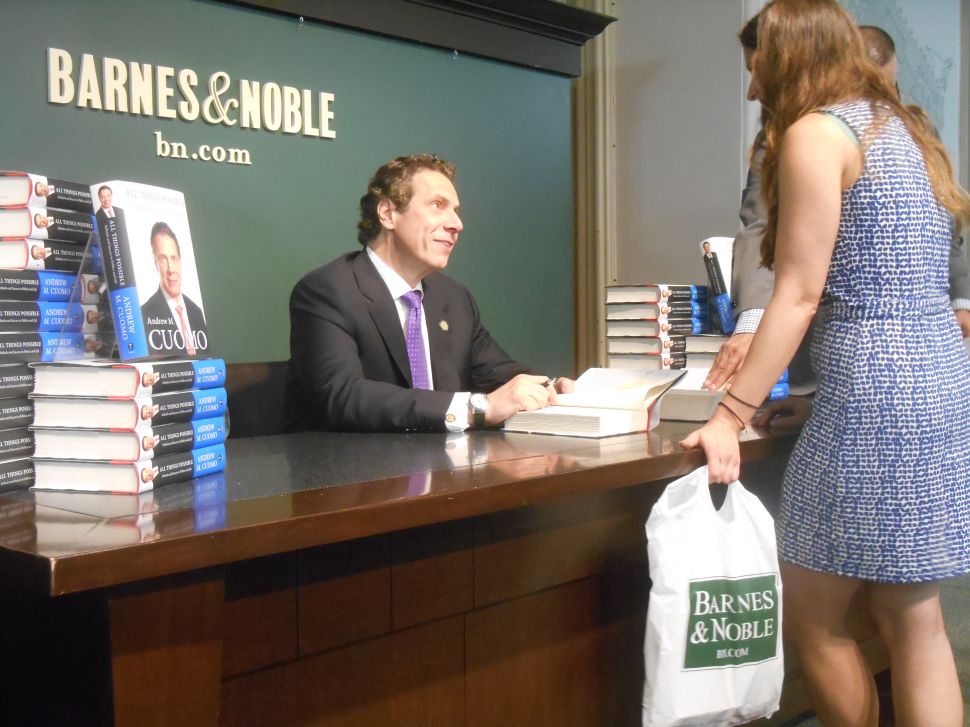