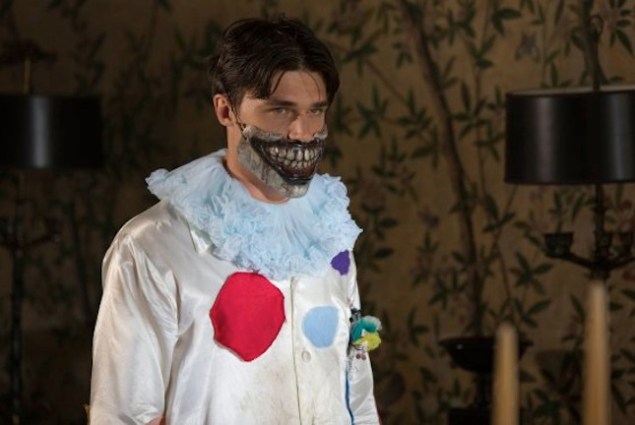 There is always that part of American Horror Story‘s season where the story starts to falter a bit, and you can feel the writers casting about for a new diversion to take up a couple episodes worth of time until they can get back to the main plot to wrap up the A-story. First season actually didn’t have this problem as much, but the whole “Why don’t they just move out of that fucking house, and oh, it’s in escrow? Ah, guess they are stuck in the horror mansion forever!” subplot was just kind of silly. (Unless the thing that scares you most is subprime mortgage loans, in which case, spoooooky!)

Asylum’s entire season was like throwing a bunch of spaghetti monsters at the wall and seeing which stuck: zombies, Bundy-esque serial killers, the devil, aliens, NAZIS(??!), Ian McShane as evil Santa…whatever works, right? I know this is an unpopular opinion in some parts, but Asylum was my least favorite season of AHS.

Coven? Witch hunters. They were supposed to be this huge deal, and then were easily dispatched by a ghost with an axe in a boardroom. Fuggedaboutit.

Now in its fourth iteration, I’m wondering if Freak Show isn’t hitting that mid-season slump a little too early. In this episode we see the demise of our Big Bad, Twisty the Clown*, who, it’s revealed in a backstory eerily similar to FunLand from Sandman, just really wanted people to love him. Or something. Edward Mordrake (Wes Bently with an extra head) has to bring one “freak” to join his menagerie in limbo/hell/whatever every time he’s summoned by a performance on Halloween, which Elsa Mars did when she sang Lana Del Ray. Poor Lana: she’s like the Beetlejuice of really bad songs. Mordrake’s other face tells him which freak has sinned the most (is that it?), or has the saddest story, or had the biggest fall from grace. I dunno.

Through Mordrake, we get the backstory of several characters, including the Seal Boy (who wouldn’t get tattooed on his face, because he’s handsome, so many that’s the sin of…vanity?) and the half-woman, who once stabbed a hobo because he danced better than she did (that’s uh…greed? And…rage? Is rage a sin? I need to watch Se7en again, apparently). We finally learn how Elsa lost her legs, which was when some insane Nazi doctors put her in a snuff film. So that’s the sin of being a lady who likes sex a lot. You know, the WORST SIN OF ALL.

But as much as getting mutilated because you were a hooker (oh yes, she was also a hooker, sorry) makes you an inhuman monster who doesn’t deserve love, Elsa is spared Mordrake’s condemnation. Even though she really, really wants to die and go with him. Sorry Elsa: whores never get what they want, even when it’s the sweet caress of death. BOO TO YOU!

Instead, Mordrake is distracted from taking Elsa’s soul when he hears the xylophone-ing of Twisty the Clown (who was John Carroll Lynch this whole time?? No wonder his first appearance looked like Zodiac!), who has I guess chilled out a bit from his earlier murdery rampage and is now perfectly content to let his new protege, Dandy Mott, take charge while he bangs out the musical accompaniment. Like we’ve suspected, Twisty isn’t JUST about murder, or else he never would have taken some of those victims back to his trailer to perform tricks for them. What Twisty wanted, it turns out, was an audience.

Mordrake comes and demands Twisty take off his mask, showing us his hollow half-face. Turns out that was caused by a shotgun blast to the skull after Twisty, who used to be a normal, happy clown, tried to kill himself because some freaks told him that he was a child molester.

Again, I’m not sure what this is all supposed to mean, either metaphorically or even within the story. You’d think that having your life ruined by freaks would make you want to kill other freaks, not innocent civilians, right? And in this larger context, it’s still unclear what Ryan Murphy is trying to say about “freakdom”: if this was Glee, everything would be pro-freak and showing us how all freaks are good and gentle people on the inside, even if they’re scary or “different” on the outside. But instead, we’ve seen a lot of freak-on-freak violence, sexual assault, and straight bullying. Meanwhile Dandy Mott, who two episodes ago begged Jimmy to take him into the show because “on the inside” he was a freak, is revealed to be a murderous monster clown-in-waiting?

So I still ask: what makes someone a “freak” on Freak Show. Is it someone who is missing some essential component that would allow him or her to fit in with the rest of society? Are freaks good? Bad? Murderers? Maybe the point is just that freaks are people too. Some are heroes, like Jimmy, who saves Twisty and Dandy’s hostages and gets the town of Jupiter to tentatively befriend the big top performers. Some are villains, like Twisty, who became a monster out of circumstance, not nature. And some, like Elsa and Dale, Dot and Bette, have both good and bad inside of them: the capacity to hurt and to be hurt, to yearn for something better for themselves even while they exploit others for gain.

One of us? Scarily, yes.

* Possibly the new Big Bad will be Neil Patrick Harris or his husband, David Burtka, who will be joining the cast. 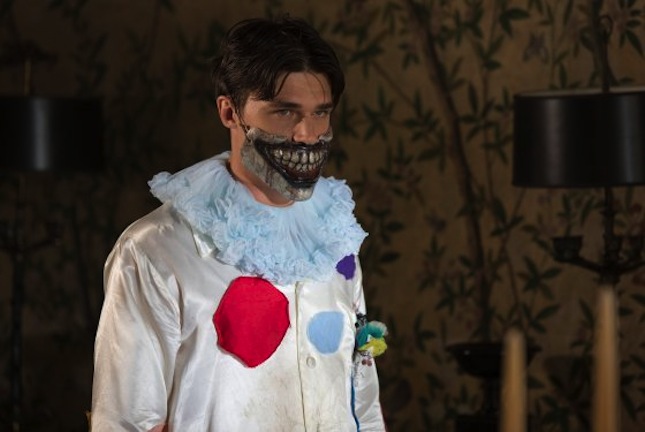