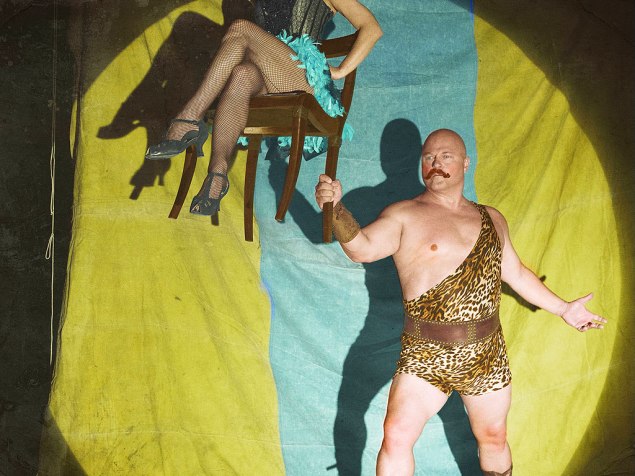 If there is one underlying theme to all the American Horror Story seasons, it’s that there is a solidarity to be found in otherness. That the silver lining of trauma is that the intense bonding it creates between survivors, and “family”–to use the term loosely–can be forged in the most unlikely of places. Like, for instance, a mental asylum, right after aliens impregnate two of your girlfriends and then one of them murders the other with an axe and you end up adopting the dominatrix nun who had sadistically dehumanized you and your sister wives. Or the Beetlejuice ending to season one, where the philandering ghost husband is accepted back into his family’s fold, while his ghost mistress has to look on bitterly through all of eternity (RIP not-Zoe Barnes.) Or the New Orleans all-female Hogwarts charter school of Coven. Or, say, a carnival freak show.

And you can feel that tugging of familial bonds in tonight’s “Massacres and Matinees,” where the misfit (and murderous!) band of carnies* “adopt” Siamese sisters Dot and Bette while revealing the subtler power dynamics of the side show hierarchy. Those who can “pass,” like ringleader Elsa Mars (Jessica Lange) and Michael Chiklis’s strong man, Wendell “‘Dell’ Toledo,” have more power, because they can interact with the normal world. As opposed to the young Jimmy Darling, who rails against the unfairness of a world where he’s treated like a monster because of lobster claws. Jimmy can’t pass, at least not for very long, so he becomes a crusader: his demand to be treated like everyone else leads him to stage a coup in a diner, demanding that him and his friends be served like regular customers. This during a city-wide curfew that threatens to shut down the Freak Show for good. Jimmy’s righteous anger makes sense, even as we see that his revolutionary tactics do more harm than good in appealing to the humanity of the local populace. (Not to mention that the curfew is only in place because of a CRAZY CLOWN and also because Jimmy MURDERED A POLICE MAN and then had the rest of the freaks* chop up his body.)

Less understandable is Jimmy’s reaction to Dandy Mott (Finn Wittrock), the foppish and creepy rich kid with an unhealthy relationship with his mother and a penchant for drinking whisky out of a baby bottle. (Baller move, bro.) Mott approaches Darling, not to make another appeal to buy Bette and Dot, but to beg to be let into the show. He literally wants to run away and join the circus. Mott’s childish fantasies of the nomadic carnie lifestyle does not go over well. “You wouldn’t last one day here,” Jimmy scoffs, dismissing Dandy with a sneer.

“You don’t know me,” Dandy beseeches. “What you’re looking at, that’s not who I am inside. I’m one of you. I’ll prove it.” When Jimmy refuses, Dandy goes to more extreme measures for acceptance in the freak community: namely, helping with the recapturing of the innocent woman (well not innocent, she has had sex and stole “rubbers,” so basically deserves it, right?) who had recently escaped from the clutches of Twisty, the Monster Clown from our nightmares. Dandy knows Twisty is dangerous, and not just because he has HUMAN EYEBALLS: earlier Twisty had beaten Dandy over the head (but not killed him or his mother, weirdly) with a juggling pin. When he tries to track the clown down, he runs into the escaped woman and pretends to offer assistance, only to drag her back to Twisty’s RV of terror.

“You’re going to have to do a much better job of confinement if we’re going to have any fun,” Dandy admonishes Twisty while the girl struggles and sobs in his arms. It’s unspoken, but even Twisty looks a little “WTF dude?” about the whole situation.

What are we supposed to make of this? That Jimmy denial of Dandy on the grounds of his privilege and lack of deformity was actually the right call, even though his argument was that for one to join the “freak show” you must have something physically wrong with you? (With the exception of the strong man, unless you count muscles as a deformity, which I do.) Did Dandy read as “off” because of his moneyed arrogance or because Darling recognized that the dude was a straight-up psycho? Are we supposed to think that Jimmy’s refusal to accept Dandy makes him and the other freaks somehow responsible for his later, violent actions? Even within the show, the logic doesn’t play: Dandy has money and (assumably) good public standing because of his family, so wouldn’t it be absolutely essential and beneficial that the outcasts currently at odds with the town use him and his connections to legitimize themselves?

Not that legitimacy is imperative from the perspective of the audience. We would love to see these guys let their freak flag fly! But the freaks’ quest for acceptance drives such a large part of this week’s plot–Jimmy leading the revolution in the diner, Elsa’s desire to become famous and known for her singing, Dell’s petitioning for matinee performances (literally, “coming into the light”)– that denying the overtures of someone just because he doesn’t understand the struggle/”glamorizes the other”/doesn’t look the part is both shortsighted and honestly kind of narrow-minded. You don’t need to look like a freak to be freaky, as Dandy “Norman Bates minus the Lexapro” Mott reminds us.

Now onto the celebratory aspects of the episode: the divine Angela Bassett as Desiree Dupree, Dell’s wife.
“I got three titties and a ding-along,” Desiree tells Elsa. “A full-blown hermaphrodite.”

“What does that make you?” Elsa asks her husband.

“The happiest man on Earth,” replies the strong man who, despite his murderous anger issues, seems surprisingly progressive and secure in his masculinity. He also seems like a savvier businessman than Greta and Elsa; suggesting the matinees as a way around the curfew, and admonishing Jimmy for making a scene at the diner, because why buy tickets to the cow when you get its lobster hands for free?

Study question: How important is it to his character that Dell can “pass” as a normal citizen? Let’s discuss in the comment thread!

Dell and Desiree at first appear welcome additions: they’re the first “freaks” who seemingly embrace their otherness as a special ability rather than a curse. They’re obviously making the best of it, even though these two might have an even harder time walking around in daylight than the Bearded Lady. Lest we forget: they’re in a biracial marriage in 1950s Florida, holy shit. But Desiree has parlayed her exoticness into a form of agency, lending out her body for the occasional gay conversion, not that it goes so well. (Her husband murders the guy he finds out on top of his wife, forcing them to go on the run.)

Study question 2: How much did it break your heart when her homosexual client started crying in relief because he thought sleeping with a hermaphrodite “straightened” him out and meant he could have a wife and family?

Desiree even works outside the confines of her own marriage structure, going behind her husband’s back to prostitute herself. She’s a pretty direct reference to Saartjie Baartman, the Khoikhoi performer who traveled in the 19th century sideshow circuit and whose abnormal genitalia one could pay to gawk at or poke with a stick; reimagined here as a woman who lives under the male gaze on her own terms.

Not that these two are shining examples of how to break down cultural barriers and promote tolerance. We learn that because of Dell’s murderous jealousy, the two have been blackballed across the carnie community. “You’re our last stop,” he laments to Elsa. Much like Dot and Bette, the Toledo/Dupree duo have literally no where else to turn…or so they say. “You’re our last stop,” Dell says. If Elsa turns him out, they just don’t know what they’ll do. What they don’t mention is that Dell is the former lover of Greta, the Bearded Lady with the exotic Baltimore accent, and that Jimmy is his secret son. Instead of having a happy family reunion–Jimmy doesn’t know Dell is his father–they immediately go about methodically undermining the existing hierarchy of the Freak Show power structure. Dell usurps his ex’s position as the show’s organizer and Elsa’s right-hand man (bearded lady?) and fights Jimmy in public; while Desiree ostensibly renders the Bearded Woman somewhat obsolete.

It’s early in the game, but it’s a sad, perhaps unintentional comment: that even in a freak show that features a Fiona Apple musical number, it’s the strong, white man who gets to pitch the tent.

*”Freaks” and “carnies” is how this group self-identifies, so that’s the term I’ll be using until we come up with a better one. 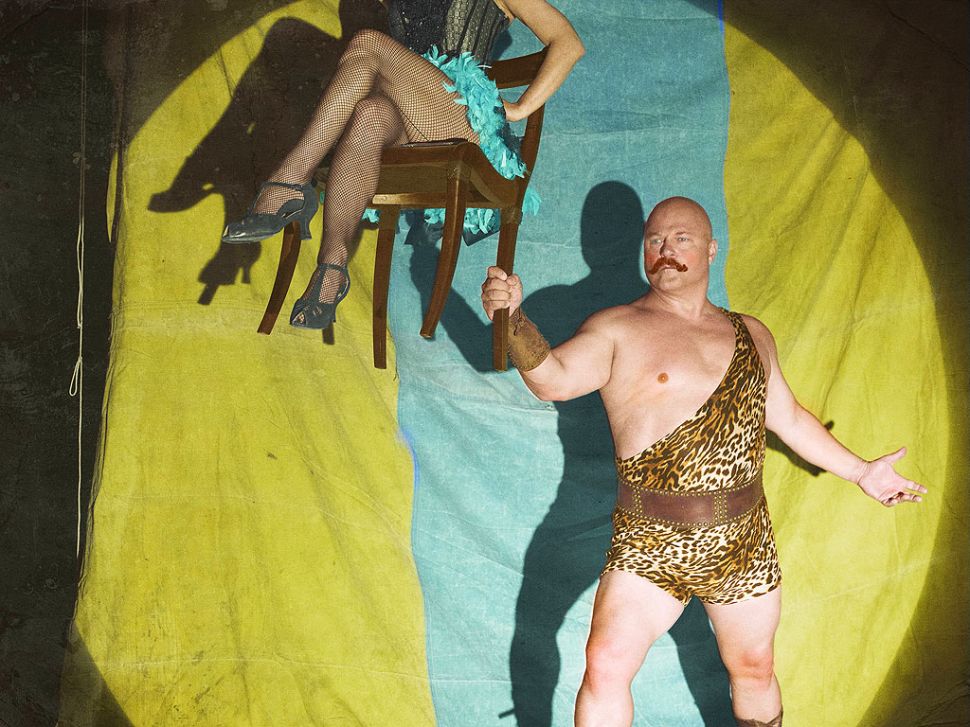