I’m scared for American Horror Story, y’all. No, not just because of that terrifying Rob Zombie clown that is stalking around the marshes and fairgrounds of 1950’s Jupiter, Florida, where this season is set; a creepy monster who murders parents in their sleep and abducts little boys and wayward young women, and whose face is obscured by the scariest motherfucking mask you’ve ever seen. (Though that will be giving me nightmares for years to come, thanks.)

And not the stars of the Freak Show itself, a hodgepodge of actual differently-abled performers playing second fiddle to famous actors using prosthetics. Nor the stars of the show themselves, many of whom have been in subsequent versions of the AHS franchise. People like Evan Peters as Jimmy Darling, lobster boy, or his mother Gretel, the carnival’s bearded lady (Kathy Bates, doing the world’s strangest Ohio-American accent as commenters and linguists have noted, it’s an intense Baltimore accent and I should have known that since I am from Baltimore), Sarah Paulson’s conjoined twins, Dot and Bette or Jessica Lange’s Marlene Dietrich by way of Klaus Nomi ringleader, Fräulein Elsa Mars.

No, I worry that once again, in Ryan Murphy’s desire to show how our culture rejects, fears and exploits the “other,” he’s invited his audience to do the same. The good guys this season are those “freaks” (to use the show’s parlance) willing to murder a detective because he dared to call them monsters. (Or at least be complicit in the cover-up by chopping his body into millions of pieces after the unstable Jimmy slashes the guy’s throat with a switchblade.) The “bad guys” are the society that have created the conditions where these folks can’t live normal lives because of their visible differences, the bored housewives with their faces “pinched with bitterness,” as Fräulein calls them. It’s in the affectation of Dandy Mott, the spoiled, overgrown man child played deliciously by Finn Wittrock, and his overly doting mother dearest, a fine Frances Conroy, who view the freaks as exotic pets to be purchased.

Then there’s the Big Baddy of the season, who also self-identifies as an “other,”  Twisty the Clown, who operates on the literal and metaphorical edge of the circus community: a lone wolf committing murders that the big-top dwellers will inevitably get blamed for. Since, you know, all circus people look alike. God, *society.*

Every season of AHS, (and the rest of Ryan Murphy/Brad Falchuk oeuvre) have played with the themes of society cast-outs building their own kind of family. About celebrating differences. About trusting those that can be easily (though often wrongly) labeled defective, and being wary of those who can “pass.”  First season: Addie (Jamie Brewer) a young woman with a mental disability offers the creepy warning about those about to enter the death house, “You’re gonna die in there!” But she’s actually a gentle soul, as opposed to her brother, the charming but sociopathic school shooter, Tate (Mr. Peters, who quickly cemented himself as a star of the show). Second season the “pinhead” Pepper (Naomi Grossman), who can only communicate after given extraterrestrial intelligence from aliens, is harmless compared Briarcliff’s resident psychiatrist Dr. Oliver Thredson and its surgeon Dr. Arthur Arden (James Cromwell), who turn out to be a serial killer who wears women’s skins and calls himself Bloodyface and a German Nazi, respectively.

Third season saw the return of Jamie Brewer (who actually has Down Syndrome) as Nan, a witch who can hear people’s thoughts, in league with Gabourey Sidibe’s Queenie, a poor, obese black woman who is a human voodoo pin cushion. Their main antagonist? The beautiful movie star, Madison Montgomery, whose power is a Carrie-like telekinesis, and who murders a whole bus full of frat boys because she can’t control her rage.

Now the fourth season brings us Jyoti Amge, the world’s smallest woman, as Ma Petite, whose “role” in the freak show consists of standing in a small cage onstage, while offstage she is coddled like a baby by a crooning Fräulein Mars. There’s Amazon Eve, played by trans actress Erika Ervin. The drummer Mat Fraser, who was born with a condition called  phocomelia, giving him the appearance of “flipper arms”: his character? Paul the Illustrated Seal. Rosie Siggins, a mechanic and mother of two, who was born with  sacral agenesis, is playing Legless Suzi.

I applaud Ryan Murphy for looking outside able-bodied, cis-gendered actors in his casting, but let’s be clear: none of these actors are the stars of American Horror Story (with the exception of perhaps Sidibe.) The top billing is, as always, Jessica Lange, Sarah Paulson, Evan Peters, Kathy Bates, and later, Angela Bassett, who don prosthetics to make them more “freaky.”

And yes, it’s a thorny problem, because by using Hollywood stars to propel the plot and actually disabled (or differently-abled) people as the “freak show” window dressing, it’s like Ryan Murphy and Brad Falchuk want to have it both ways. To have audiences shiver at the freaks, like they did in Tod Browning 1932 film (which also used actual circus performers), but cloak the exploitation in a Glee-style “Being different is the best!” mantra. As Mr. Darling says proudly after refusing to let Bette and Dot get sold to the creepy Motts, “These girls are one of us!” Gobble, gobble, indeed.

And unlike Nan or Queenie or Addie, the residents at Freak Show are played for their exoticness. They’re not nice “once you get to know them.” From what we’ve seen so far, they’ve been complicit in both a murder and the “ravishment” of a young woman high on opium, Millie (played by Meryl Streep’s daughter Grace Gummer). “I can still feel them inside me, all of them,” Millie moans when shown a black and white film reel of her preparing to be entered by Paul the Seal. He licks his flipper lasciviously while she glowers like the somnambulist in Dr. Caligari. Millie cries as she watches the film, and we as the audience? We feels what she feels: horror and disgust. This is not about society rejecting “otherness”: the scene is framed so we, the audience, are equally repulsed.

This is not to say that American Horror Story: Freak Show wasn’t a fine episode: my god, that “Life on Mars” number alone was worth the price of admission. But there’s this very careful line between celebration and exploitation when it comes to “carnies” (again, the show’s term) that this season will need to tread, and I’m not sure if Mr. Murphy is up for the balancing act. 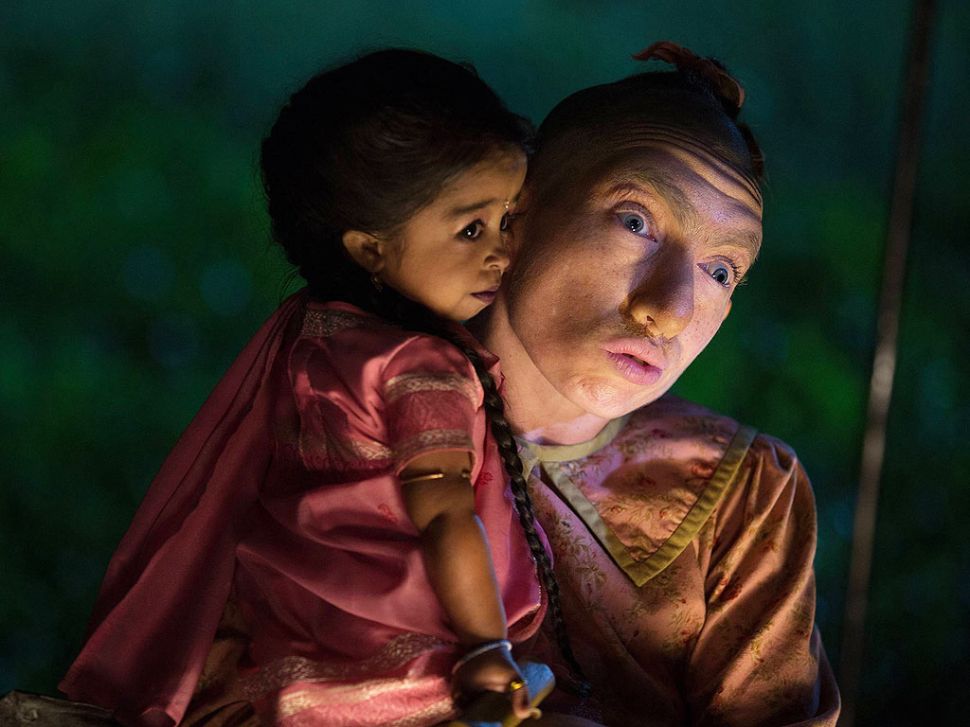