Two years after Hurricane Sandy, Mayor Bill de Blasio touted his administration’s progress in helping get storm victims back home — and even helped paint a room and varnish a fence at one storm-wrecked property in Coney Island.

But as the mayor conceded in a visit to Staten Island, frustration still remains among hundreds of people who still can’t return to their homes and sadness among those who lost family killed in the storm.

The mayor pointed to resiliency efforts already completed — five miles of protective dunes on the beaches of Staten Island — and planned for the future, like a system of armored levees slated for the borough’s East Shore.

He also spoke of progress made through the city’s much-criticized Build it Back program, which aims to rebuild, repair, and elevate homes hit by the storm, or reimburse homeowners who did so on their own. More than 4,100 homeowners have accepted an offer from the city; 1,500 are in the design process for home rebuilds or repairs; 762 have seen construction start on their homes and 1,090 have received checks. Zero homeowners fit into any of those categories earlier this year.

Many on Staten Island and in other devastated communities have been critical of the city’s response to Hurricane Sandy, which began under former Mayor Michael Bloomberg, who created and launched the Build it Back program before Mr. de Blasio revamped it. But Mr. Oddo, a Republican, said he didn’t want to wade into why things had not gone smoothly.

“I have very profound very distinct opinions on why we are in this place,” Mr. Oddo said, his voice rising as he went on to describe meeting a young student this morning who two years later has not returned home. “I think I have a clue as to why, in part, we got there. But that’s not for today. What today is about is to say to the governor, as we did earlier, to say to the mayor, thank you for all the work to date, and continue to help us.”

The Republican went on to say the mayor’s staff for storm recovery — including top advisor Bill Goldstein and Build it Back director Amy Peterson — were good people, with whom he’d had some battles.

Councilman Steven Matteo, another Republican who holds the Council seat Mr. Oddo held during the storm, said the anniversary of the storm was a “tough day, no question.”

“No one will be satisfied until every person gets the help they need. Every single person,” Mr. Matteo said.

Earlier in Coney Island, Mr. de Blasio sought to provide a little help to some of those people who have yet to return home. He helped paint the inside of a home owned by Margurie Batts, 80, which is being rehabbed by Habitat for Humanity, one of several nonprofits working with the city to rebuild homes in cases where owners may not be eligible for the federal aid provided through Build it Back or otherwise hung up on red tape.

Ms. Batts described some of the same carnage — rising waters, floating debris — that Mr. Oddo recalled seeing in Staten Island. The came up to the second floor, where she lived — completely destroying a tenant’s apartment below — and she was trapped until it receded.

But despite how awful the storm was, Ms. Batts said, Hurricane Sandy brought people together.

“Every man was an island before,” she said. “We can’t say it was all bad, but it was nothing good — but for bringing us all together.”

“That’s a powerful point,” Mr. de Blasio told her, before helping stain a wooden fence in her yard. “We thank you for your spirit.” 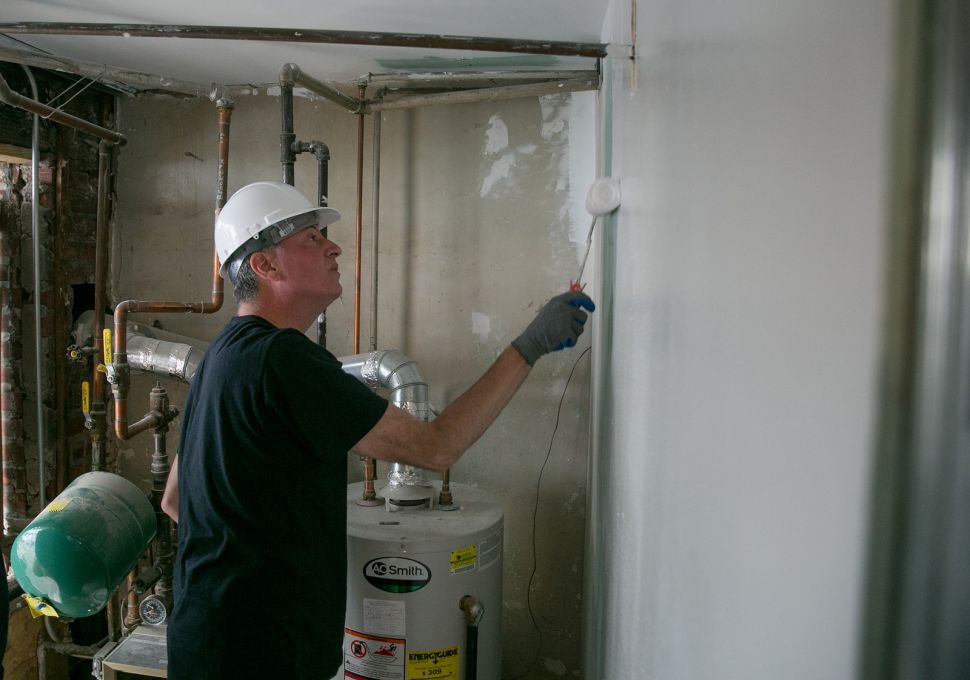