Mr. Cuomo said that a mandatory 21-day quarantine would remain for all travelers, including medical personnel, who return from West Africa after coming into direct contact with Ebola patients. The governor explained that the travelers would be quarantined at home and monitored twice daily, though he did little to soften the sharp rhetoric that has raised the eyebrows of city and federal officials.

“This is a war on a virus in West Africa,” Mr. Cuomo said at the press briefing in Manhattan. “There’s no doubt but that this is a safer policy.”

Downplaying the burden of a quarantine to travelers–and rebuking once more the argument that a mandatory quarantine would discourage healthcare workers from traveling to West Africa to combat Ebola–Mr. Cuomo said, when speaking of quarantines, that “it’s not like a terrible task is being asked of you.” He explained that any person quarantined would be compensated by the state if the organization they work for won’t pay them for the duration of the time they are out of work.

Mr. Cuomo and Mr. de Blasio, as well as their respective health commissioners, strained to show reporters that the city and state are collaborating effectively to prevent any Ebola outbreak in New York City after a Manhattan doctor returning home from West Africa fell ill with the virus. Collaboration, however, appeared to be in short supply when Mr. Cuomo, along with New Jersey Gov. Chris Christie, announced a new quarantine policy for New York and New Jersey airports without consulting Mr. de Blasio.

Ebola, though contagious, is not an airborne disease and cannot be spread if a person is not showing symptoms. The virus has killed thousands in Africa but only one person in the United States.

“I’ve informed them of our policy. The current CDC [Centers for Disease Control and Prevention] policy is somewhat less than our policy. I understand that, I’m totally fine with that,” Mr. Cuomo said, not making clear exactly why the details of the quarantine policy were not entirely spelled out Friday. “I think this is the best policy for New York.”

Mr. Cuomo also insisted there had been no change to the quarantine policy over the weekend — and that he had always intended for returning travelers to be kept at home, as long as they have a home in which to stay, though there was no mention of that on Friday when he spoke of facilities to house people under quarantine.

A clear fault line, at least in rhetoric, is emerging between the governor and mayor. Mr. de Blasio, a fellow Democrat, sharply criticized Mr. Christie, a Republican and Cuomo ally, for how a nurse returning home from Sierra Leone was treated in New Jersey. The nurse, Kaci Hickox, was quarantined in a portable tent sans shower despite showing no symptoms of Ebola. In a CNN interview today, she described her treatment as “inhumane.”

“Of course, a lot of personnel at Bellevue were affected by the treatment of Nurse Hickox and were troubled by it,” Mr. de Blasio said tonight, referring to the Manhattan hospital where the city’s first Ebola patient is quarantined.

“When we send a soldier overseas to defend our freedom, we welcome them back,” the mayor said. “Sadly, some New Yorkers have treated the very people that are helping us at Bellevue Hospital with some discrimination.” 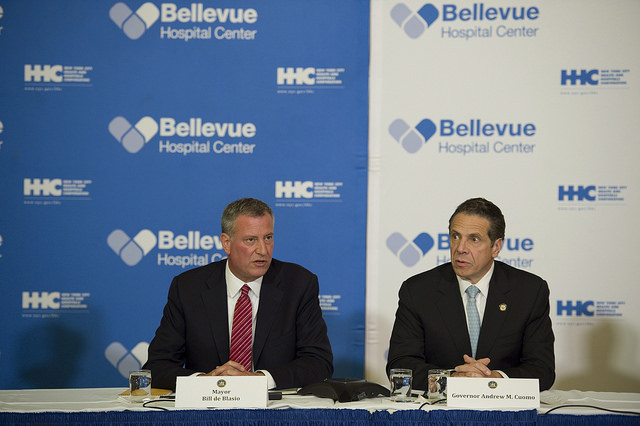