Gov. Andrew Cuomo once more vowed an unwavering commitment to Israel at a roundtable of Brooklyn Orthodox Jewish leaders tonight.

Speaking at a last minute campaign stop at Beth Jacob of Borough Park–one of the city’s most well-known Orthodox Jewish enclaves–Mr. Cuomo reminisced about the trip he made to the Jewish State this summer during the country’s battle against Hamas militants in the Gaza Strip.

“The trip was magnificent. They could not have been nicer to us, the government could not have been more welcoming to us, the prime minister was gracious, the minister of defense. We were only there for 12 hours, but we saw everyone in 12 hours. For me it was a trip I’ll never forget,” said Mr. Cuomo, recalling how former Israeli President Shimon Peres led him on a tour of the attack tunnels the Islamists built, and how he noted the extent and complexity of the subterfuges. “It gives you a sense of the mindset of Gaza. It was a remarkable trip, and it was really very important for us to stand up for Israel and make that powerful political and cultural statement.”

Mr. Cuomo complained of media coverage of the Israeli-Palestinian conflict, and said he would fight to help the Middle Eastern nation improve its international image. Like his Republican rival, Rob Astorino, Mr. Cuomo has assiduously courted the city’s Orthodox Jewish community.

“When you grow up in New York, you grow up as a member of the Jewish community, and that’s how I grew up. And that’s the relationship that I feel in my essence. And as governor of New York, it’s one of the really valuable things I can do and that is something that I want to do,” Mr. Cuomo added.

He lavished praise on the local elected officials present–Councilman David Greenfield, State Senator Simcha Felder and Assemblyman Dov Hikind. The governor singled out Mr. Hikind–a controversial figure–for special accolades, calling him “a hero of mine,” “a friend of my father” and a “voice of courage and of strength.”

Mr. Cuomo echoed the assemblyman’s call for the passage of the Education Investment Tax Credit, which would help parents pay for religious schools–which the governor compared to his expansion of the state’s Tuition Assistance Program to cover yeshivas and his public funding of busing for students of Orthodox Jewish schools. Mr. Cuomo claimed such funding is simply equitable and right.

“It’s not charity, it’s not a favor. It’s justice. TAP. Public transportation and the school buses, that was justice. Education tax credit–this is a matter of justice,” he said as the crowd broke into applause. “I want you to understand that’s the way I see it. On a personal level, this is a very important relationship that I honor. And as governor, I have sworn to do justice. And there have been a number of great injustices that your community has endured for a long, long time. And it is my profound wish that we should work together and we should resolve them and bring justice to the community that we deserve.”

One of the event’s organizers, Jewish philanthropist Sol Werdiger, announced that he intended to usher Mr. Cuomo into even higher office.

“I can only promise that in four years we’ll be doing this again, only it’ll be ‘Cuomo for President,” Mr. Werdiger said.

The governor laughed the remark off.

“You had to make trouble. It was all good over until now,” he said. 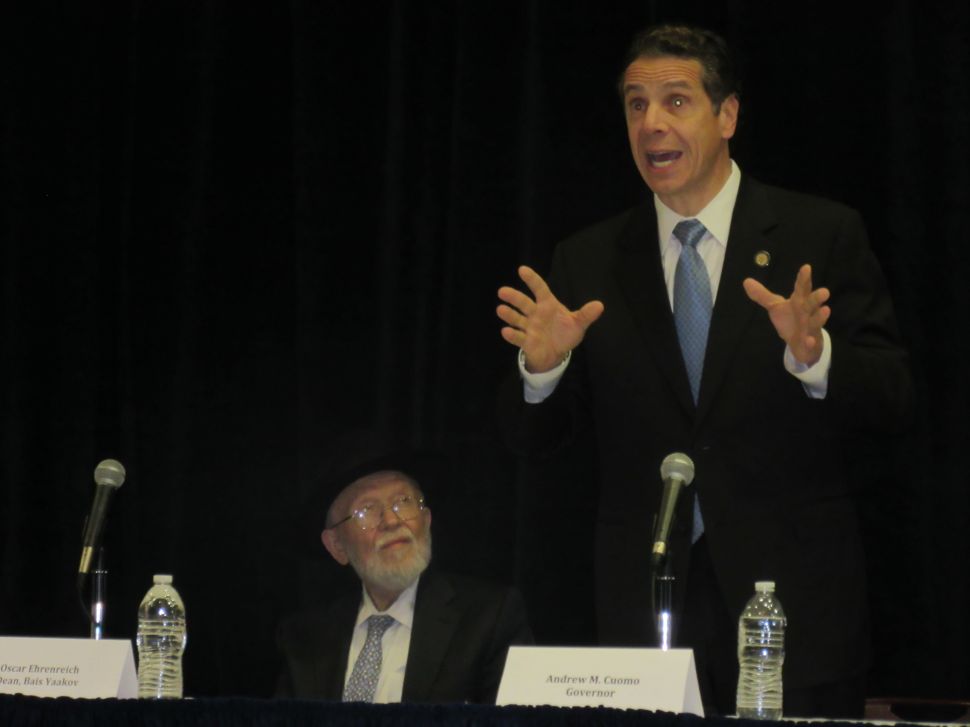