“We have waited in vain for two nights,” sings the Doctor in the last act of Verdi’s Macbeth, words that took on a peculiar resonance for the audience at the Metropolitan Opera last Wednesday. The first two nights of the company’s season comprised a listless new Figaro and a revival of La Bohème hobbled by a soprano in poor voice, both exercises in futility. But then came Macbeth, worth the wait of not just two nights but of two whole seasons.

This revival, worthy of the Met’s status as the greatest opera house in the world, doesn’t try to reinvent the wheel. Its classic plan for success includes a superstar cast, sensitive conducting, a handsome production … plus the X factor of a delicious surprise. That last element proved the most potent: Anna Netrebko’s ferociously exciting star turn as Lady Macbeth.

In her 13 seasons at the Met the Russian soprano has gained a devoted public with her luscious voice and glamorous stage presence. But in this role—which she has sung only once before—she delivered what opera buffs call a “demented” performance, one so exciting it propels both artist and audience figuratively to the brink of madness.

After a spine-tingling entrance, starting awake from a black-sheeted bed as if jolted from a nightmare, she sailed into the first aria, “Vieni, t’affretta,” in full, ringing voice, pouring out the sort of decibels you associate with a full dramatic soprano. Yet the sound, though large, remained lyric, warm and seductive.

Her acting, too, emphasized Lady Macbeth’s sensuality, to the point of her being sexually aggressive with Macbeth (baritone Zeljko Lucic.) In director Adrian Noble’s modern-dress take on the tragedy, Ms. Netrebko played the Lady as an alluring trophy wife turned power broker. Her sleek monochromatic outfits were set off with an expensively coiffed white-blonde mane: Madonna meets Veronica Lake.

In the eerie second act aria, “La luce langue,” she starved her tone of vibrato, suggesting choked horror at the thought of further political murders to consolidate her position as queen. Later in that act, she nailed the tricky leaps and trills in the Banquet Scene’s “Brindisi,” then sent her lustrous voice soaring over the ensemble in the finale of the scene.

But the Lady Macbeth’s most formidable challenge is the final Sleepwalking Scene, in which the tormented queen recalls her misdeeds in music depicting guttural exclamations, gasps and moans. Ms. Netrebko achieved every ghastly effect without ever making an unmusical sound, a bel canto approach altogether appropriate to the sensibility of the 1847 score.

The final hurdle of the role is a high D-flat Verdi asked to be sung in a “thread of voice.” The soprano’s note, precisely pianissimo, was if anything a little too assured for the tense dramatic moment. But I’ll take “too assured” any day over the squeals and whoops most Lady Macbeths emit.

Ms. Netrebko was not working in a vacuum; the remaining roles were all cast with artists working at top capacity. Mr. Lucic, who first sang Macbeth at the Met when this production was introduced in 2007-2008, has refined his portrayal, phrasing majestically and acting with concentration and fire. The remaining parts, the murdered patriot Banco and the vengeful Macduff, are not strictly speaking star roles, but the Met lavished on them A-list singers, bass René Pape and tenor Joseph Calleja, respectively. In particular, Mr. Calleja’s throbbing performance of Macduff’s lament for his slain children was a highlight, elevating his character to a credible adversary to Macbeth.

Mr. Noble’s dystopian production was admirably decluttered this time around, though the introduction to the Sleepwalking Scene, with Lady Macbeth tiptoeing over a row of rickety ballroom chairs, remained nerve-wracking for exactly the wrong reason. Similarly unfussy was the conducting of Fabio Luisi. The brisk, lean sounds of the Met orchestra both drove the drama forward and supported Ms. Netrebko’s lyrical take on Lady Macbeth’s music.

This sort of blockbuster is not what the Met delivers on a day-to-day basis; what you can expect is something more the level of Friday night’s respectable performance of La Bohème. With Tuesday’s Mimi, Ekaterina Scherbachenko, now calling in sick, the role passed to veteran soprano Hei-Kyung Hong. This was her 62nd performance of this role with the company, a run dating back coincidentally to the very Bohème I heard at the Met in January 1987. In 28 seasons, time has mostly stood still for his artist: the voice remains delicately sweet, the phrasing dainty and charming. Unrehearsed, she acted with gentle grace.

Partnering her was one of the Met’s most promising young stars, tenor Bryan Hymel. His unconventional voice is as concentrated as a laser and therefore a little cool sounding next to more traditional Italian tenors. But his phrasing is generous and romantic, and his top B-flats and C’s as brilliant as fireworks. He’s an unusually sympathetic actor, too: there’s something utterly heartbreaking about seeing this burly guy collapsing in sobs at his lover’s deathbed. Among a workmanlike cast, Alexey Lavrov sparkled as the bohemian Schaunard with a bright, pingy baritone and bubbly stage energy. Conductor Riccardo Frizza made the familiar score sound lithe and fresh.

True, the Met needs to dish up soigné fare like Macbeth more often, but, in the meantime, a solid Bohème will keep body and soul together. 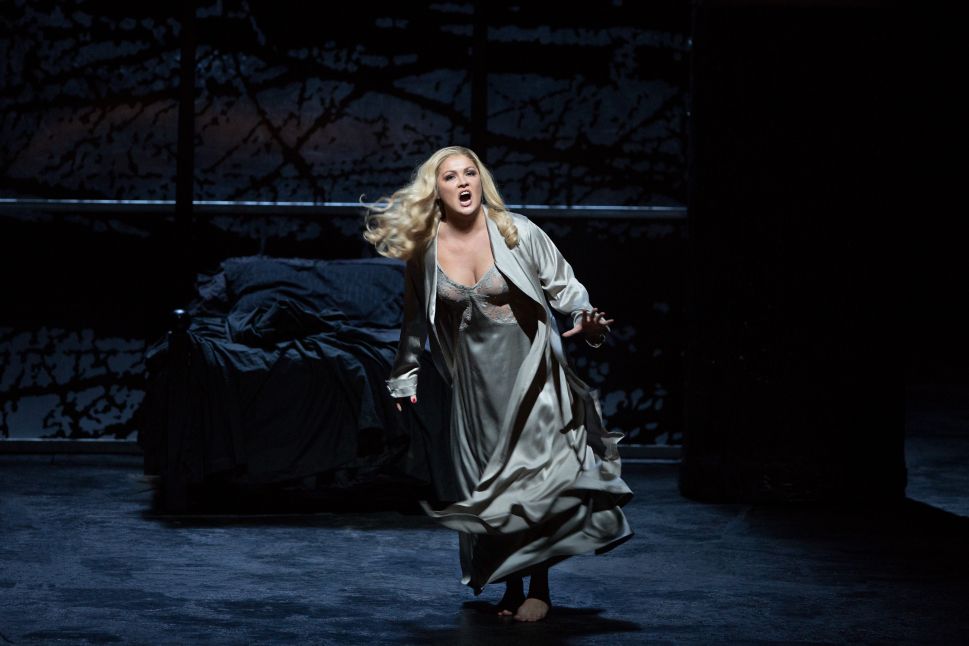