Continuing the time capsule trend that is apparently sweeping the city, the New York Historical Society opened a large, elegant bronze chest Wednesday, only to be met by its rather unexciting contents. Though admittedly it was a considerable improvement on the nickel found in the Jay Street time capsule in Brooklyn last week.

Those who visited the museum and library over the past few years may have admired the ornate, claw-footed box that has resided at the Historical Society for almost a century. But perhaps the most impressive aspect of the chest was that—until yesterday—it remained nailed shut.

The box was perhaps a more riveting topic back when it was sealed on May 23, 1914, when New York City community members gathered in celebration of the historic Downtown Manhattan coffee and tea markets. They unveiled a plaque commemorating the site of the Merchant’s Coffee House—a notable local of the trade that had burned down 110 years earlier. And former president of Columbia University, Seth Low, performed a special part of the ceremony by sealing the chest, presumably filled with various documents and important items. The time capsule was then entrusted to the Historical Society, along with instructions to open it in the year 1974.

Yet the chest remained forgotten in a storage unit in Chelsea until Historical Society curators, who were cataloguing artifacts, stumbled across it in the late 1990s.

While not officially the oldest unopened time capsule, historian and New York Historical Society fellow Nick Yablon–who has studied the tradition of burying meaningless items under the ground–is pretty sure this box is one of the oldest.

“Disappointment is the most common reaction to time capsule openings,” Mr. Yablon said before the grand unsealing commenced.

Frankly, there were not many people to disappoint–only a handful of community members attended the unveiling. But the press was frantic to get a good story regardless. Channel 2 News reporters scrambled to get the story on for six o’clock, while a man supposedly from Buzzfeed milled around with an over-sized camera.

“It feels like I’ve been waiting 100 years,” said one guest during the ten minute process of carefully removing over 30 screws from the lid of the box

Officials of the ceremony announced the contents one by one, which included a newspaper, a telegram from Governor Martin H Glyn, Lower Wall Street Business Men’s Group souvenirs and a copy of a “famous” letter from the New York City Correspondence Committee to the Committee in Boston about the American Revolution–oh, and a book written by Abraham Wakeman, the man who curated the time capsule.

“Very predictable” concluded the historians after opening the chest. 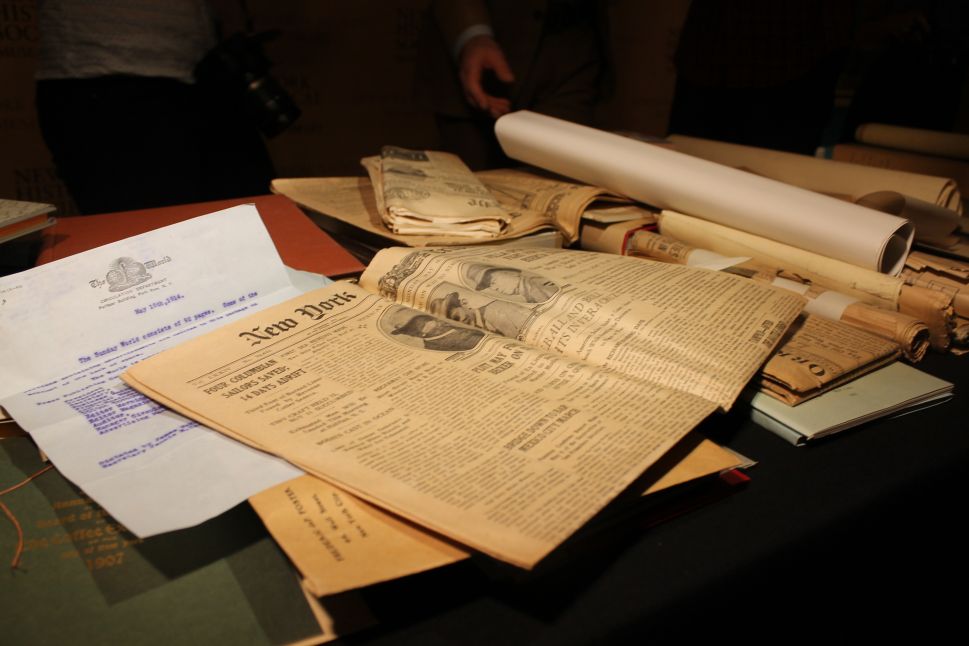