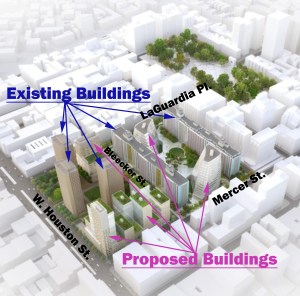 The lay of the land. (Greenwich Village Society for Historical Preservation)

A panel of judges in the State Supreme Court’s Appellate Division today reversed a previous ruling that put large portions of NYU’s contentious $6 billion 2031 expansion plan on hold. The appellate decision takes issue with Judge Donna Mills’ January finding that four Greenwich Village parcels, which the city had previously turned over to NYU, constituted “implied” parkland and thus could not be ceded (“alienated,” in legal parlance), to the university without a vote in the state legislature. Judge Mills’ ruling gave the go-ahead to the university for only one of four planned buildings—which had become the target of a lawsuit filed by Assemblywoman Deborah Glick, Community Board 2, local residents and the Greenwich Village Society for Historic Preservation (GVSHP), among others—while pumping the proverbial brakes on the other three.

Though they are not mapped or officially designated as parks, the plots in question have been used that way for decades. Several are fenced and bear signage marking them as such—some have been listed on the official Parks website. (The contested area is bordered by LaGuardia Place, Mercer Street, West Houston Street and West Third Street.) But as reported originally by DNAinfo, the reversal raises questions about the process by which space becomes “implied” parkland. “While the city has allowed for the long-term continuous use of parts of the parcels for park-like purposes, such use was not exclusive, as some of the parcels (like LaGuardia Park) have also been used as pedestrian thoroughfares,” the judges wrote, further noting that the plots appear on maps as streets.

Andrew Berman, the executive director for GVSHP, did not, however, seem particularly worried about the decision— which his organization and its co-petitioners plan to appeal—when the Observer reached him by phone this afternoon. “Ultimately, we believe that the argument that we made will win the day,” he said. “There’s a long history of judicial action to protect park spaces like this, and to define spaces like this. Whether the city officially mapped them as parkland is irrelevant at this point.”

NYU, quite naturally, took a different view of things, saying in a statement, “The need for additional academic space is clear and has been reaffirmed by a faculty-led committee, and it is now also clear that the University has the legal right to proceed with this project.”

Still, in correspondence obtained by the Observer submitted last summer to Judge Mills, GVSHP’s legal counsel noted that the city had already acknowledged that the Lower Manhattan highway project that caused the sites to be mapped as “streets” in the first place had been abandoned by the 1960s—and that they never had been, nor would they ever become actual “streets.” The letter also seemed to anticipate the appellate argument that some of the sites have been used as “pedestrian thoroughfares,” which, it quite rightly pointed out, definitely does not turn land otherwise used as a park into a street. (Walking across Central Park via pedestrian path, after all, doesn’t make Central Park into a roadway.)

A determination of whether the city had implied its dedication of the space to parkland, the lawyer wrote, turned on “the city’s ‘manifest intent,’ as reflected not in subjective views of City bureaucrats largely out of public view, but rather in objective ‘indicia’ that give the public a reasonable expectation the site is and will continue to be held in public trust for the public’s recreational use.” Further, the letter emphasized, the city had already gone so far, in 1999, as to hold an “opening” ceremony for a playground on one of the parcels.

Then again, the city’s support for the university’s plan might well take for inspiration certain important long-range considerations, whatever the merits of NYU’s particular claims. To establish over-broad parameters for what constitutes “implied” parkland could invite lawsuits down the road from citizens’ groups, community gardeners and the like who have made use—perhaps even for years—of fallow public land over stretches of time during which the city had no special purpose for it, and who turn possessive when officials move to take over to build, for example, housing, educational or formal public recreational facilities. Needless to say, the results could be messy, time-consuming and, above all, costly.

Perhaps in view of such issues, Mr. Berman took a fairly conciliatory tack—at least where the court was concerned. “It’s a conservative decision in the sense that judges don’t typically like to go against the decisions of elected officials,” he said. “But I would say it’s telling that NYU’s own faculty, students and workers have disagreed with the administration. Traditionally, this is space that has been used as parkland, and it cannot simply be alienated and given away. What’s undeniable is that that’s not something you can do without the approval of the state legislature.” 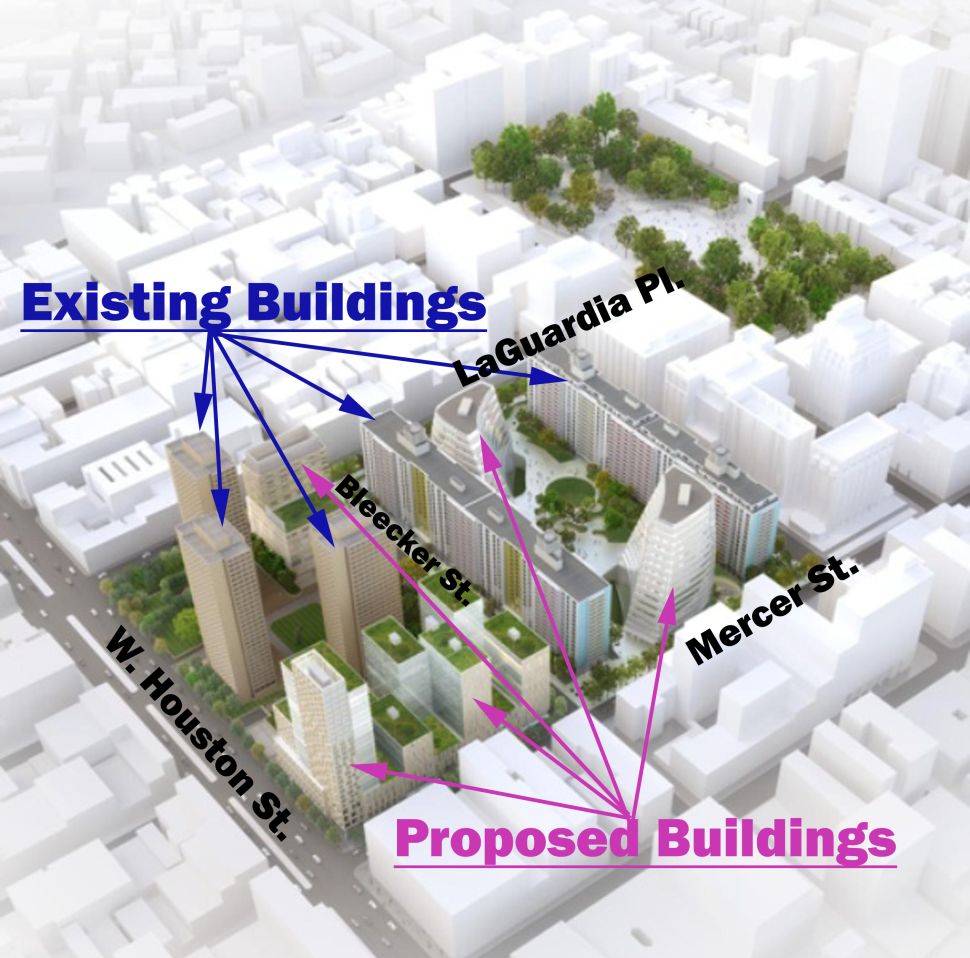