Frieze London is again upon us, which means a circus of auctions, gallery openings, galas and gatherings will all go down in addition to the main event, the fair at Regent’s Park. Here’s a rundown of the proceedings for those keeping score at home. [NYT]

Then back home in New York, the Met is prepping to exhibit the expansive and extremely comprehensive collection of Cubist works owned by Leonard Lauder. Well, expansive in number, if not scope—he owns works just by four artists: Picasso, Braque, Léger and Gris. [NYT]

George Lucas, who has a museum now, likes pin-up girls. Which is not really a surprise if you’ve seen American Graffiti. [New York Observer]

Speaking of the ladies, here’s a roundup of all the Warhol portraits of famous women that Sotheby’s is putting on the block during its contemporary sales this November: Jackie, Marilyn, Judy Garland, B.B., Debbie Harry, etc. [artnet]

Before we skip back across the pond, let’s talk about someone who really isn’t heading to London anytime soon. That would be Ai Weiwei. Which makes this story about Ai Weiwei going to London for a show of his work at the Royal Academy of Art a tad pointless. [The Independent]

However, if you aren’t restricted from leaving the country due to being carefully monitored by the Chinese government, feel free to fly to London and check out this Damien Hirst show about his beloved pharmaceutical intoxicants. “Pills are a brilliant little form, better than any minimalist art. They’re all designed to make you buy them,” says Mr. Hirst, in The Guardian. Then there’s a nice slideshow of the works. [The Guardian]

And here is Sarah Thornton writing about the daughter of Carroll Dunham and Laurie Simmons, who apparently has a television show and just published a book. [The Independent] 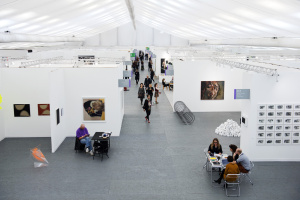