Sotheby’s to sell two sculptures of female deities that are estimated to rake in $145 million. Halleluiah. [The Art Newspaper]

You know what else Sotheby’s is selling? A portrait of a 21-year-old Mozart that Mozart gave to his 18-year-old cousin, with whom he was having an affair. Not a good look, Wolfgang. [The Guardian]

But for those that do! The Whitney is opening for 36-hour-long Koonsapalooza to close out its Upper East Side space, and the Court Jeffster will make an appearance in the dead of the night, says Whitney director Adam Weinberg. Also, I totally saw Koons and Weinberg getting dinner Tuesday night at Hotel Americano. Looked like they were scheming. [NYT]

Colorado Police are arresting and prosecuting kids who think it’s fun to climb on the facade the Aspen Art Museums and take selfies. As they should. [artnews]

Reviews! Here’s Roberta Smith on “Fire!” at Venus Over Manhattan, which was curated by the oh-so-dashing Simon and Michaela de Pury. “There are artists whose main focus is ceramics, among them Shio Kusaka, Takuro Kuwata and Young-Jae Lee, all classicists in their own ways. Any eccentricity comes from artists who work in several media, like Sterling Ruby, Josh Smith, Dan McCarthy, Friedrich Kunath and Rosemarie Trockel.” [NYT]

And Karen Rosenberg meditates on PeaRoeFoam, the material integral to the Jason Rhodes show at David Zwirner, and the material that lends the show its name. [NYT]

And then here’s Roberta Smith on the last room in the Robert Gober retrospective, “The Heart is Not a Metaphor,” and it’s a room that, after seeing the show Wednesday night, left me too stunned to speak and shaking, if I’m being totally honest: “The show culminates in Mr. Gober’s memorial to Sept. 11, first seen at the Matthew Marks Gallery in Chelsea in 2005. It makes an even stronger impression here, in tighter quarters, its resonances heartbreakingly intensified. Spreads from The Times’s Sept. 12, 2001, report about the terrorist attacks approximate stained-glass windows. They are drawn with glimpses of embracing bodies, a combination that powerfully contrasts public and private loss. The pews are apparently palettes of scruffy plastic foam (actually painted bronze), displaying objects that evoke fecundity, birth and the Crucifixion. On the altar wall, a headless body hangs as if on a cross, sprouting from his nipples, recalls the first sinks. A spring robin perches on his arm. There are more layers of history and meaning to be explored here, but Mr. Gober’s great subjects are autonomy and self-knowledge, which this exhibition demonstrates at nearly every turn. As he said: ‘You. Not me.'” [NYT] 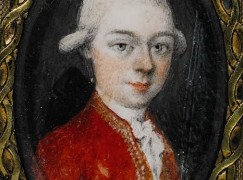