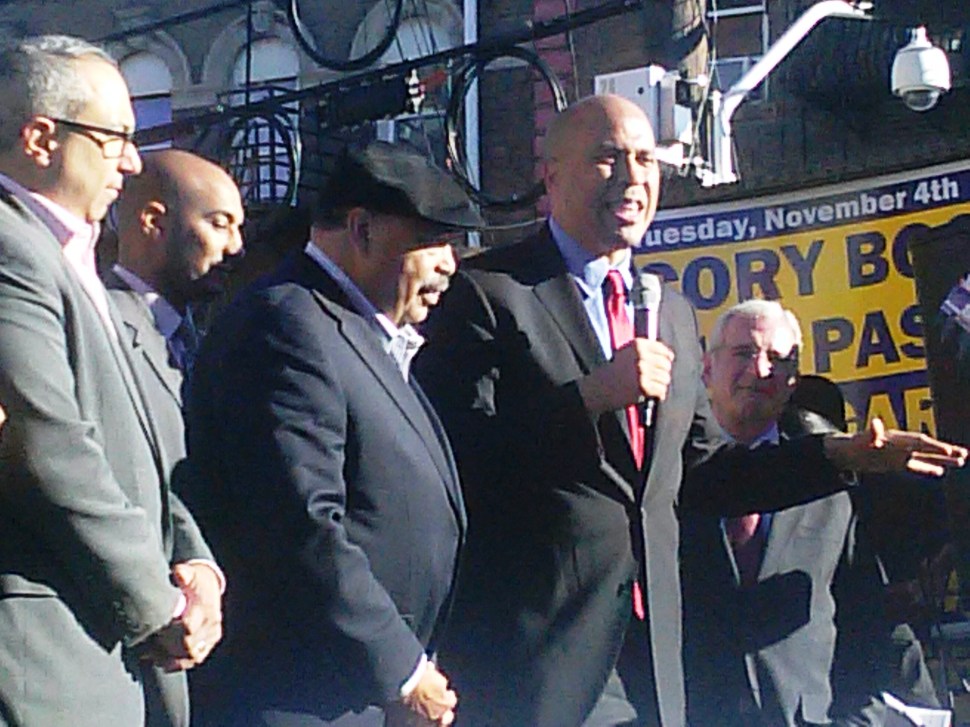 PASSAIC – In a basically moribund election cycle, a typically effervescent U.S. Sen. Cory Booker (D-NJ) bounded onstage and attempted to inflate a public mood soured by the weather and jittery with Ebola.

“I’m cold,” grimaced a recognizable face in the crowd near a flatbed stage where Booker grabbed the microphone from Democratic State Party Chairman John Currie and spouted Spanish.

Booker spoke buck-up slogans to this Latino crowd, fire-blanketing this portion of his base – a base he has worked for at least ten years – even as his Republican, Ronald Reagan-quoting opponent expresses a nibbling interest in appealing to Latino voters.

At this rally, attended by a core of local party members, Passaic County Freeholder Bruce James poked fun at Republican efforts to project diverse interests, pretending – in a show of their irrelevance, in his view – to forget the name of the opposition party.

“Hispanics are conservative in some areas but when it comes to so many practical, day-to-issues, Republicans just aren’t there,” said Schaer, who stood onstage with Booker and his local colleagues, including Mayor Alex Blanco, proudly announced as the first Dominican mayor in the country.

The assemblyman noted the minimum wage issue, which his party championed in the legislature, and which Democrats like Booker seek at the federal level.

“The issue of a fair minimum wage is a direct example, where so many Hispanic voters are living on a minimum wage that is far below the poverty level; economics is simply one area where Republicans just don’t get it.”

Bell, however, for his part argued that Booker has been elusive and out-of-touch on another issue, one with far-reaching health concerns: namely how this country can combat the Ebola virus and stem an international crisis.

Last Thursday, the Republican challenger to Booker called for a ban on entry by foreigners with visas from the three countries hardest hit by Ebola in an effort to make sure that no more Americans become infected with the deadly virus. He cited Guinea, Liberia and Sierra Leone.

“Ebola never should have come to America, and we need to prevent more citizens from becoming infected by putting in place a temporary ban on visitors with visas from the three countries where this outbreak is concentrated,” said Bell. “The Northern New Jersey/New York City region is one of three metropolitan areas that handle nearly all of the airline passengers from these West African countries, and I don’t think simply screening at the airports is enough to stop the virus from coming in.”

Following the rally, PolitickerNJ caught up with Booker as the senator climbed into his SUV vehicle.

PolitickerNJ asked the senator about whether he believes the United States should ban those countries hardest hit by the virus.

“We’ve issued a lot of statements,” Booker said. “We’ll get you a public statement about Ebola. We’ve been doing a lot of work, as you saw probably in The Star-Ledger. Just give us a chance to answer that one.

“This is not an election issue this is a public safety issue,” he added.

Silvia Alvarez, Booker’s spokesperson, re-issued a statement put out by the campaign on Friday.

“The senator has been in frequent communication with public health and homeland security experts, who maintain that a travel ban is not the best approach to protecting Americans from the spread of this disease and could actually make matters worse,” Alvarez said. “The senator expects a regular reevaluation of this policy and is committed to ensuring all necessary resources are made available to carry out the vital work of protecting Americans from Ebola.”​ 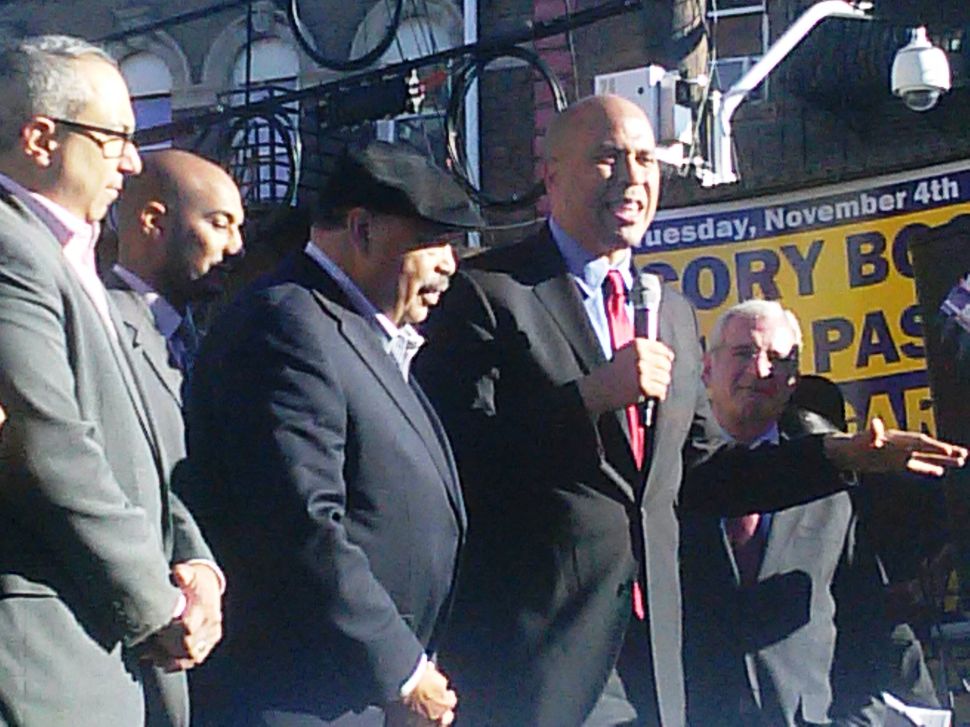