Tedesco, a Democratic Bergen County freeholder, appeared before the Bergen County Central Trades and Labor Council (AFL-CIO) on Saturday, Oct. 4 in Paramus to ask for their continued support after the organization’s recent endorsement.

“If here to tell you as a Republican that with Democratic candidate Jim Tedesco, you’ve picked the right man for the job,” Saudino said.

Footage of the rally, courtesy of the Bergen Dispatch, can be seen here.

“We are honored and happy to have Sheriff Saudino’s support,” said Tedesco campaign spokesman Michael Pagan, who was at the Saturday event.

Donovan and Saudino have publicly fought over policy issues in recent months. One key flashpoint centers on a contract that Saudino, first elected in 2010, negotiated for his more than 400 officers in 2011.

The contract provides 2 percent raises in each of the four years to those officers at the top step of the salary guide, according to police union officials. The contract also gives all officers two hours of compensatory time when they work on a holiday. Officers receive regular pay on those days.

Saudino and Donovan have also sparred over the potential use of two mine-resistant, ambush-protected vehicles, known as MRAPs, by his department.

Saudino stated in August that he will delay deploying the vehicles until state and federal officials finish their reviews of the program under which police departments across the country acquired the surplus equipment free of charge.

Donovan agreed with the delay, but also called on the freeholders to reverse their vote from earlier this year allowing the sheriff to obtain the military-grade vehicles from the U.S. Defense Department. The county executive also called for a one-year moratorium on purchasing any other military vehicles so that the issue could be fully aired in public.

Saudino shot back that Donovan’s real reason for her reservations about the vehicles are tied to the ongoing debate over the merger of the Bergen County Police Department with the sheriff’s department. Donovan opposes the move, while Democratic-controlled freeholder board supports it. The merger matter also remains in litigation.

“This was not unexpected,” said Donovan campaign spokesman Mark Campbell. “We’re sure the taxpayers of Bergen County will vote for Kathe Donovan. I think Its worth noting that Kathe Donovan endorsed the sheriff when he ran. I can’t speak to the sheriff’s motivations.”

There is a section of the Bergen County Republican Organization by-laws which states that members of the organization can be recalled for “support of a candidate of another party.”

“The by-laws speak for themselves,” Yudin said. 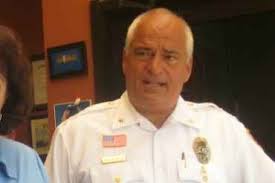