You know you’ve seen it all when an American administration is reduced to calling a world leader – and a strong ally – a “chickensh**t.” As Jeffrey Goldberg revealed to us in The Atlantic, the Obama administration assigned that epithet to Prime Minister Netanyahu. But then who would really blame them? With the world smoldering in flames and its foreign policy largely in tatters, all the king’s men are feeling none too good about themselves. And who better to blame than the world’s scapegoat?

No, I’m not accusing the administration of anti-Semitism. I’ve been one of the loudest voices decrying accusations of anti-Semitism against the President as defamation, character assassination, and an outright lie. The President has demonstrated far too much friendship with the Jewish community to ever be labeled with that epithet.

Rather, by scapegoat I mean that if the world is already piling on Israel and blaming it for everything from the rise of ISIS to Hamas’ use of children as human shields, you may as well blame your own foreign policy failures on this soft target.

The president’s men feel that the democratically elected leader of Israel is too cowardly to make peace with the Palestinians and too cowardly to strike Iran. The obvious contradiction in the allegation is self-evident and proves something entirely different. The Obama administration has a pathological dislike of the Israeli Prime Minister and will blame him for almost anything, or more specifically, blame him for not handing them the foreign policy success they so desperately crave and need.

In no area has the president failed more than in foreign policy. That is not my view, but the view of the American people who have given him the lowest poll numbers in foreign policy than any modern leader with the exception of Jimmy Carter. In this election cycle fellow Democrats have avoided the president like he was carrying the Ebola virus. The videos of Democratic Senate candidates refusing even to acknowledge that they voted for President Obama are the stuff of Jon Stewart comedy.

Which one of these guys looks like a chickenshit to you? pic.twitter.com/783aR1rNkR

(Above: An Obama official calling Benjamin Netanyahu a “chickens**t” lit up the twitterverse.)

No doubt, therefore, the president, Secretary Kerry, and all the rest of the team were hoping that the one country that gets more ink than any other and that has proven so malleable in the past would prove so again and agree to another self-destructive deal. But Prime Minister Netanyahu has remained steadfast, refusing to turn over more land to the Palestinians whom, he is convinced, will turn it into another Gaza-like terrorist launching pad. Moreover, Bibi has the temerity to publicly contradict the president and declare repeatedly that Iran, the second-most wicked government on earth after North Korea, cannot be allowed to be a nuclear power. Its centrifuges must stop spinning.

Having been humiliated by Iraq, Russia, Libya, Egypt, and Syria, the president needs an Israel-Palestinian deal and an Iran deal.

The insult is a curious choice.

If there’s one association you’d think the Obama administration would not wish to draw to itself is cowardice. This is, after all, the administration that has been stared down by Vladimir Putin, drawn red lines in the sand by the tin-can dictator Assad that were promptly violated, and watched helplessly as an American ambassador was slaughtered on sovereign diplomatic soil. At times it’s been almost painful to watch Vladimir Putin mock the most powerful man in the world and get away with it.

That’s not to say that President Obama has not shown grit. His decision to fly deep into the territory of a purported ally to kill Osama bin Laden was the stuff of truly courageous leadership. But such actions have been the exception rather than the rule.

And it’s actually more of an indictment than if the president had shown perennial weakness like Jimmy Carter. I believe strongly that President Obama actually has an iron core and is capable of taking strong action. But he has slowly allowed that strength to be overcome by the overarching philosophy of “don’t do stupid stuff,” as if a philosophy of inaction can define any presidency or bring order to the chaos of the world. In any case, sins of omission are always more serious than sins of commission. By not doing stupid stuff, Neville Chamberlain did some pretty stupid stuff.

Through the course of his presidency I have offered the president both praise and also criticism. But whatever has frustrated me about Obama, I believed and continue to believe that he is a man of maturity, deep intelligence, and sophistication.

It is therefore tragic that the presidency of a man of such substance should be reduced to petty name-calling and shallow insults.

Come back to us, Mr. President. You still have two years left to your presidency and the world is crying out for leadership. We need you back in the saddle. Stop licking your wounds, stop blaming everyone for your failures, and inspire the nation with a truly courageous vision of your own rather than calling highly distinguished world leaders who have done the tough job of facing down terrorism a Chickensh**t.

Mr. President, it’s beneath you.

Rabbi Shmuley Boteach, “America’s Rabbi,” is the international best-selling author of Kosher Sex and The Kosher Sutra. He has just published Kosher Lust: Love is Not the Answer. Follow him on Twitter @RabbiShmuley. 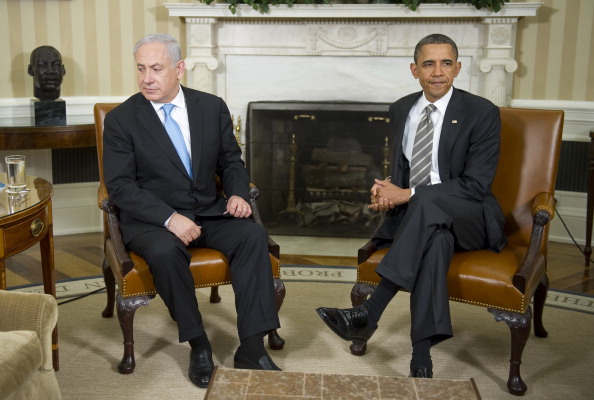