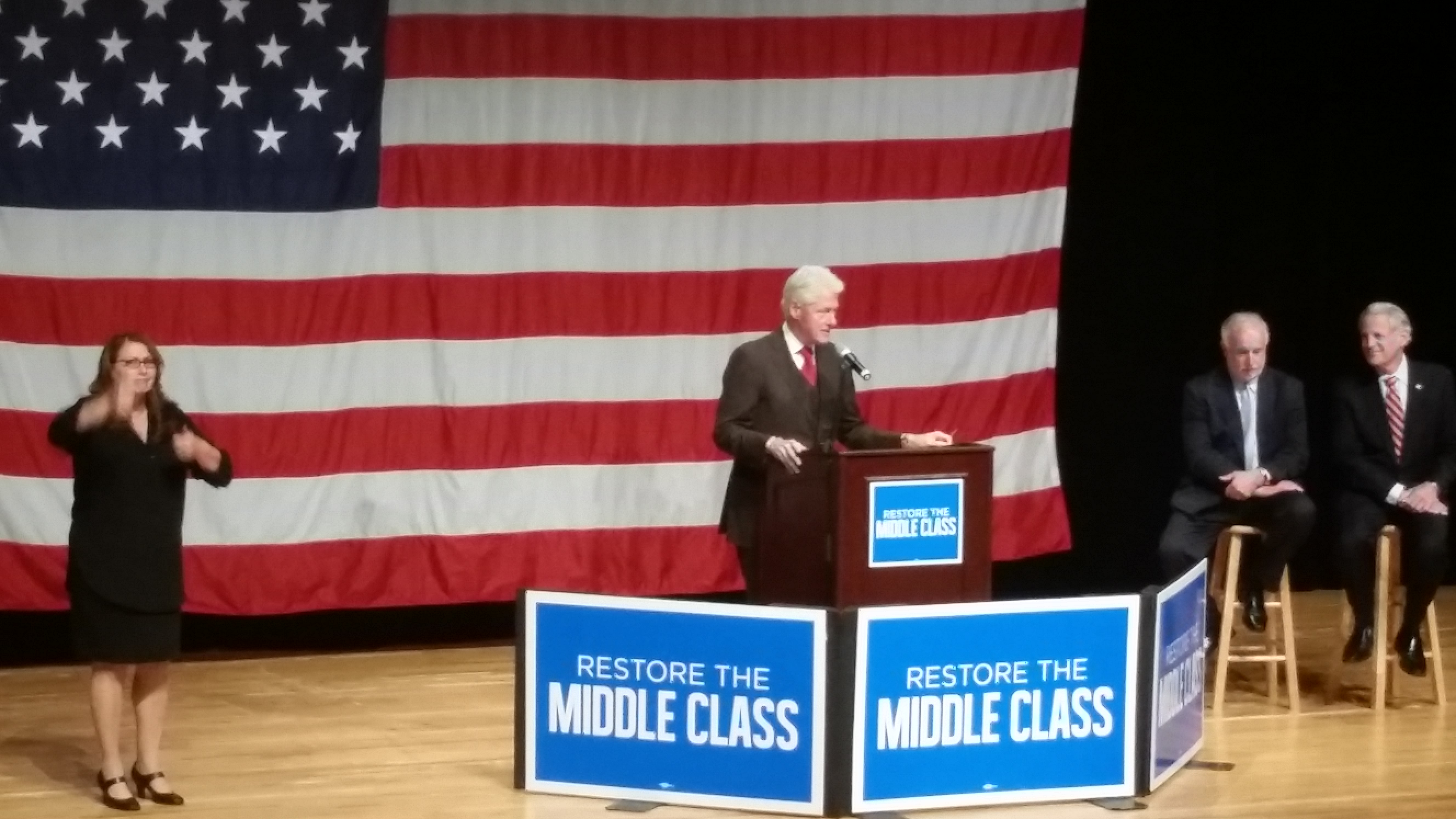 “This country works better when we grow from the middle out and give poor people a chance to work their way up,” he added, calling the Republican opposition to a federal minimum wage hike “laughable.”

Mr. Clinton–joined by Steve Israel, a Long Island congressman and chair of the Democratic Congressional Campaign Committee, and several Suffolk County legislators–told students here that they needed to show up in droves to re-elect Congressman Tim Bishop to offset what is expected to be a dismal midterm turnout in New York.

Mr. Clinton railed several times against Mitch McConnell, the Senate minority leader from Kentucky, and the various political action committees that, with limited transparency, are bruising Democrats with negative advertising. After telling a story about visiting a predominately African-American school when he was president and meeting a student who only viewed presidents as dead white men, Mr. Clinton said a rising Republican star like Texas Senator Ted Cruz, a potential presidential contender, should “thank his lucky stars” that President Barack Obama “destroyed that stereotype.”

Striking a populist note in his typical folksy demeanor, he bemoaned the “black bag money” infecting politics and highlighted Mr. Bishop, a low-key lawmaker representing a swing district in eastern Long Island, as a shining example of how a pragmatic legislator needs to act in a polarized Congress.

“He is a great congressman in the old-fashioned sense of the word,” Mr. Clinton said. “He realizes that every day, no matter what’s being voted on in Congress, he can make something good happen for the people of this district.”

The former president is on a national swing as Mr. Obama’s popularity continues to wane. Mr. Clinton recently appeared in Arkansas, Michigan and Kentucky to boost Democrats there and his wife, Hillary Clinton, is also hitting the trail–she will attend an election rally tomorrow for Gov. Andrew Cuomo.

Mr. Clinton came to Stony Brook four years ago to headline a raucous rally for Mr. Bishop, a Democrat even more vulnerable that year than today. First elected in 2002, Mr. Bishop was nearly a victim of the Tea Party wave when Republican Randy Altschuler came within several hundred votes of unseating the incumbent. Mr. Bishop beat Mr. Altschuler two years later by a wider margin.

Mr. Bishop’s opponent, Republican State Senator Lee Zeldin, used Mr. Clinton’s appearance to fund-raise for his campaign, which despite favorable national trends and Mr. Bishop’s past struggles was down 10 points to the incumbent in a September poll.

“National Democrats know that they can count on Tim Bishop to be a rubber stamp for the Obama/Pelosi agenda–the same agenda that has led to Obamacare, soaring debt and a weakened foreign policy,” Mr. Zeldin said. “That’s why they are running Bill Clinton to Stony Brook … to keep Bishop in office at all costs.”

Though Mr. Bishop barely eked out a victory when Mr. Clinton last came to Stony Brook, national Democrats are privately confident that Mr. Bishop, a strong fund-raiser, can hold on against Mr. Zeldin. This is not exactly commonplace–Republicans appear poised to pick up seats in the House to cushion their majority and even retake the Senate.

The Long Island race is also a tad personal for Mr. Clinton: he vacations in the Hamptons, an affluent Democratic stronghold in the district, every summer,.

“The closer you get to making a turnout in the midterm [greater]–even just the students here is something–the closer you will be to the future that you want,” he said. “You’ve got to believe that the more people who vote, the better off you’ll be.” 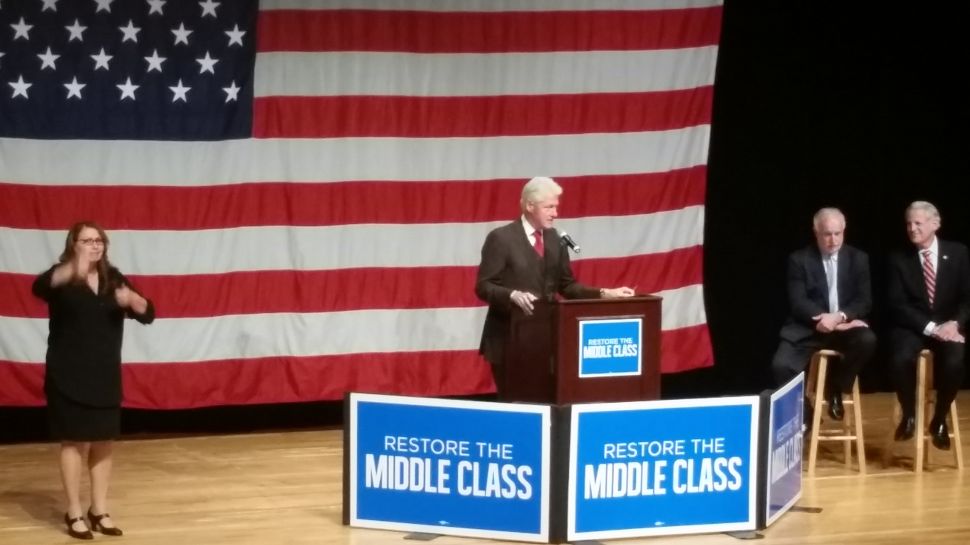