Domenic Recchia Jr., bristling at the end of a brief but acrid forum today, was forced to wonder aloud why Michael Grimm never ran for mayor.

“You know, my opponent, if he wanted to run against Bill de Blasio, he should’ve ran for mayor last year,” Mr. Recchia grumbled at the close of the first in-person clash between himself and the Republican congressman. “You’re running against me, Michael. Face the facts, I have a good record to run on.”

Notably, Mr. Recchia never offered a robust defense of Mayor Bill de Blasio or President Barack Obama in the Bay Ridge, Brooklyn senior center tucked under a Verrazano-Narrows Bridge overpass. It was a reminder that the “ultra liberal” (in the words of Mr. Grimm) mayor can be a liability in the right-leaning Staten Island and southern Brooklyn-based district where Mr. Grimm has repeatedly hammered away at Mr. Recchia for his association with Mr. de Blasio, who like Mr. Recchia is a Brooklyn Democrat and served in the City Council.

“He made deals with Bloomberg, he’ll make deals with de Blasio and they are very much the same. They are both ultra liberal progressives,” Mr. Grimm told reporters after the forum at the Fort Hamilton Senior Center. “When Al Sharpton wanted to shut down the Verrazano Bridge, I was front and center and said no way, this shouldn’t happen, this is disgraceful. He wouldn’t even take a position because he didn’t want to upset Mayor de Blasio.”

The crowd of several dozen, noshing on miniature bagels and cream cheese, appeared almost evenly divided between loyalists for Mr. Recchia, a moderate Democrat who rose up in the world of pragmatic, machine politics, and Mr. Grimm, a suave ex-marine facing a 20-count indictment related to a restaurant he managed before he was elected to Congress four years ago. One anonymous audience member even submitted a particularly cringe-worthy question asking what could be done about immigrants from Africa and Muslims in “full body masks” hiding Uzis. (Each candidate said the question was not appropriate.)

The elderly audience murmured disapprovingly–and also cheered–when Mr. Grimm invoked the legacy of Ronald Reagan, the former president and conservative icon. They wailed “noooo” when Mr. Grimm, aping Mr. Reagan’s strategy against Democratic incumbent Jimmy Carter 34 years ago, asked if they were better off in a world where Mr. de Blasio and Mr. Obama held power.

“And if you think this city is better off with de Blasio as your mayor, vote for him,” Mr. Grimm said of Mr. Recchia. “I think we need to get back to the traditional values that actually built this country … If you think my opponent is in a better position to support the president or support de Blasio and be a rubber stamp, then God bless you. But I’ll stand up against the president every chance I get when he’s wrong and if he’s right, I support him, but most of the time he’s wrong.”

Mr. Grimm, unlike other Staten Island elected officials, is a persona non grata in Mr. de Blasio’s City Hall. He does not attend Mr. de Blasio’s events on Staten Island and the mayor, who has not formally endorsed in the race, said he believes Mr. Recchia will prevail. Mr. Grimm’s strategy, though, is not ill-founded: Staten Island was the lone borough the mayor lost in the general election.

Predictably, the two rivals–nearly tied, according to a recent independent poll–traded blows on a range of topics, including immigration and food stamps. Mr. Recchia, calling Mr. Grimm a “liar” and an “embarrassment,” asked how the Republican could serve his district while facing an indictment and being alienated from many of his congressional colleagues. Touting his independence, Mr. Grimm said he helped craft a bill that delivered billions in aid for Hurricane Sandy victims–Mr. Recchia pointed out congressional Republicans, to the consternation of New York elected officials, haggled over the spending and delayed the bill.

“People are tired of what’s going on in this district. They want a congressman who will show true leadership, a congressman that will work for them and most of all a congressman they can be proud of–not someone who is going to be an embarrassment, not someone is going to go on t.v. and threaten to throw a reporter off a balcony,” Mr. Recchia said, referring to an incident when Mr. Grimm was caught on camera threatening a NY1 reporter.

Mr. Recchia ably parried Mr. Grimm’s various jabs and avoided the verbal missteps that have plagued him on the campaign trail. But he ducked the press while Mr. Grimm held court with reporters after the forum.

Aides said he was headed to an event on Staten Island. They did not disclose exactly where. 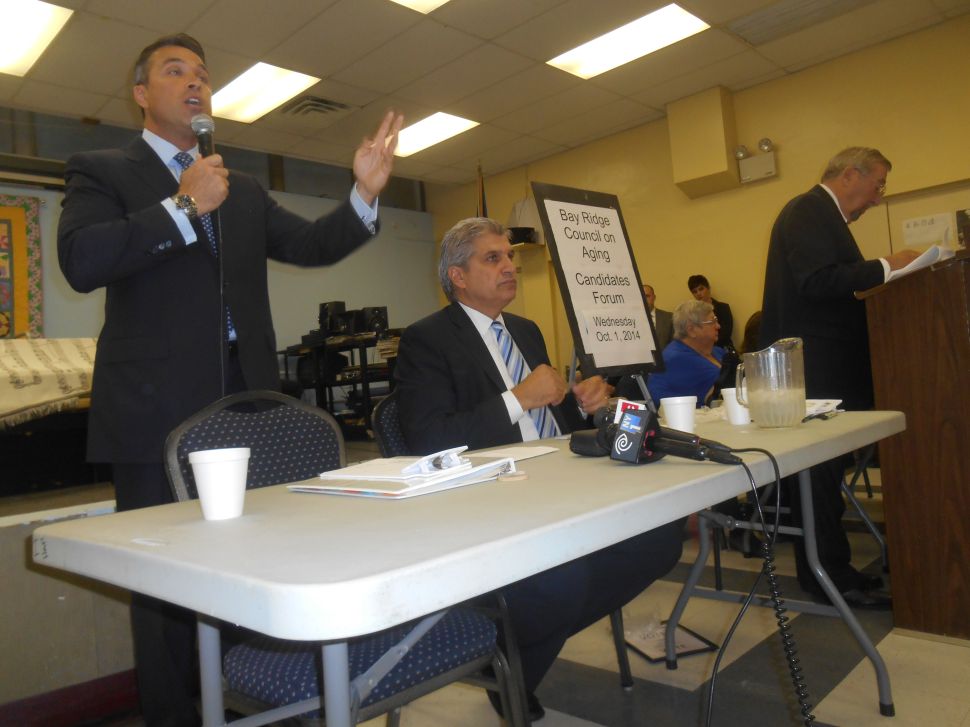