Mayor Bill de Blasio announced today he will eventually ask wealthy parks conservancies to volunteer cash for his new parks equity plan, but for now $130 million in public money will fund the initiative to spruce up lesser-known parks.

The announcement came as Mr. de Blasio and a coterie of elected officials flocked to a park in Flushing, Queens to champion the mayor’s plan to distribute public funds to overlooked neighborhood parks throughout the five boroughs. The mayor, however, stopped short of saying explicitly he would compel conservancies to redistribute their funds.

“The public sector is putting our money where our mouth is. We will, I assure you, we will also turn to the major parks conservancies and ask them to make a substantial contribution to this process,” Mr. de Blasio said. “We expect to get some real important contributions from the conservancies as part of these processes.”

Speaking with reporters, Mr. de Blasio would not say exactly how he would convince these conservancies–the Central Park Conservancy, the nonprofit group, received a $100 million gift two years ago–to chip in cash to other parks, but said conversations were in place to make this a reality eventually.

“There’s a lot of ways to get that done. We’ve been in real conversations with them and I hope I’ll have something more to say quite shortly,” he said. “I do expect the conservancies to play an important role.”

When pressed about the possibility of the city eventually legally enforcing a redistribution of resources, Mr. de Blasio said “all ideas were on the table.” He did imply, however, that only a voluntary model may be feasible and that a major public contribution would spur private donors to give to non-marquee parks.

When he was running for mayor, Mr. de Blasio expressed support for a proposal championed by State Senator Daniel Squadron that would have mandated large conservancies which pump millions into parks like Prospect Park and Central Park contribute 20 percent of their budget to under-funded parks. Critics argued such a plan would discourage donors from giving cash to the conservancies; even liberal local elected officials who represent the parks resisted the proposal, and some others questioned its legality.

When Mr. de Blasio introduced Mr. Squadron today, he thanked him for the “extra energy” he lent to the parks debate. Mr. Squadron praised the mayor’s initiative, even though it differed from his original proposal.

“A year and a half ago, folks were simply not talking about parks equity,” Mr. Squadron said today. “Parks, especially those in communities of greatest need, suffered from chronic under-funding.”

Mr. de Blasio held his press conference on the cracked blacktop of Bowne Playground, where elected officials like Councilman Mark Levine, the chair of the council’s parks committee, Queens Congresswoman Grace Meng and Public Advocate Letitia James heaped praise on the mayor for his plan, known as the “Community Parks Initiative.” The $130 million in capital dollars–a mayoral commitment of about $110 million and nearly $20 million from elected officials and grants–will go to 35 neighborhood parks for various repairs and upgrades.

The left-leaning elected officials all argued–or implied–that former Mayor Michael Bloomberg focused too much on high-end parkland like Brooklyn Bridge Park and the High Line in Manhattan at the expense of less glamorous parks and playgrounds.

“It’s been decades of disinvestment in our parks, decades, and again, it did cut along demographic lines,” Mr. de Blasio said. 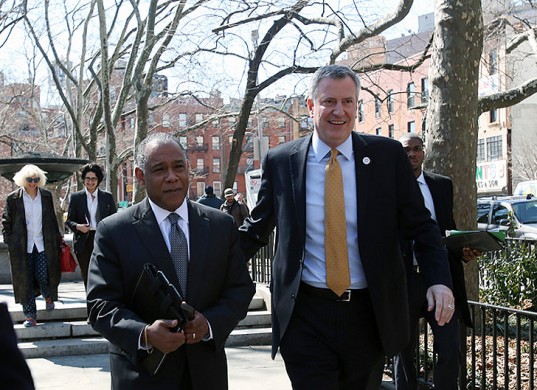