A good cast is credited with supporting Bill Murray in the uneven and largely unfunny so-called comedy St. Vincent, but it’s actually the other way around. Making his feature debut, writer-director Theodore Melfi is new at the game of undeserved overpraise for minimal effort extended, but Mr. Murray is an old hand. I liked him enormously as a randy F.D.R. in Hyde Park on Hudson, which his fans dismissed as boring, but I’m baffled by the premature raves last month at the Toronto International Film Festival for St. Vincent (one critic called the film “a ticket to movie heaven”). I found it the cinematic equivalent of a 10-mg. Valium.

In the ho-hum St. Vincent, Mr. Murray does his ossified comedy bit as a grumpy slob who marches to a different drum that sounds more like the tapping of a barefoot toe. As Vincent, a dilapidated, pickle-faced loser who lives in Sheepshead Bay, he’s the kind of lout you’d take one look at and reiterate what Rodney Dangerfield put on his gravestone: “There goes the neighborhood.” When a divorced and struggling mother moves in next door with her precocious son, the moving van knocks down a tree branch that crushes his ancient Chrysler convertible. In the kind of logic accepted only by Hollywood comedy writers, a bond forms between the drunken old curmudgeon and the runty 12-year-old kid who is victimized by bullies at his new school in Brooklyn.

While the absentee mom works long hours as a nurse to fight her ex for child support, Vincent becomes a reluctant babysitter. He gets $12 an hour and the tyke gets a half-baked Krav Maga class in self-defense and a life lesson in how to hold up a bar stool at the local saloon. Befriending prostitutes and hanging out at the race track beats math class, but the movie never manages to escape its dubious fate as a sentimental slant on the old Wallace Beery-Jackie Cooper routine (cute kid vs. irresponsible surrogate father). More clichés encroach than laughs.

The star moves through his usual paces with enough sight gags to keep his undemanding fans baited, but the surprising thing is the solid work that goes on around him. Fresh from his Tony award for last season’s Of Mice and Men, Chris O’Dowd is the dim-witted Catholic priest who tries to teach the kid from school books instead of bets at Belmont. Naomi Watts is amusingly miscast as a pregnant Russian hooker. As the kid, Jaeden Lieberher is a scene-stealer. Most impressive is Melissa McCarthy in her first mature “straight” role, without her usual obnoxious vulgarity. She leaves that up to the star, who obliges by driving over a picket fence and bashing in his face in a kitchen mishap that leaves him in a silly nose bandage.

Lazy, eccentric, chain-smoking and accident-prone, Mr. Murray gives ’em what they clamor for. His eventual redemption as a saint in disguise is predictable. The direction is negligent and the jokes are mild. It’s an O.K. little picture that doesn’t really go anywhere, but it has a resonance that is easy on the heart. 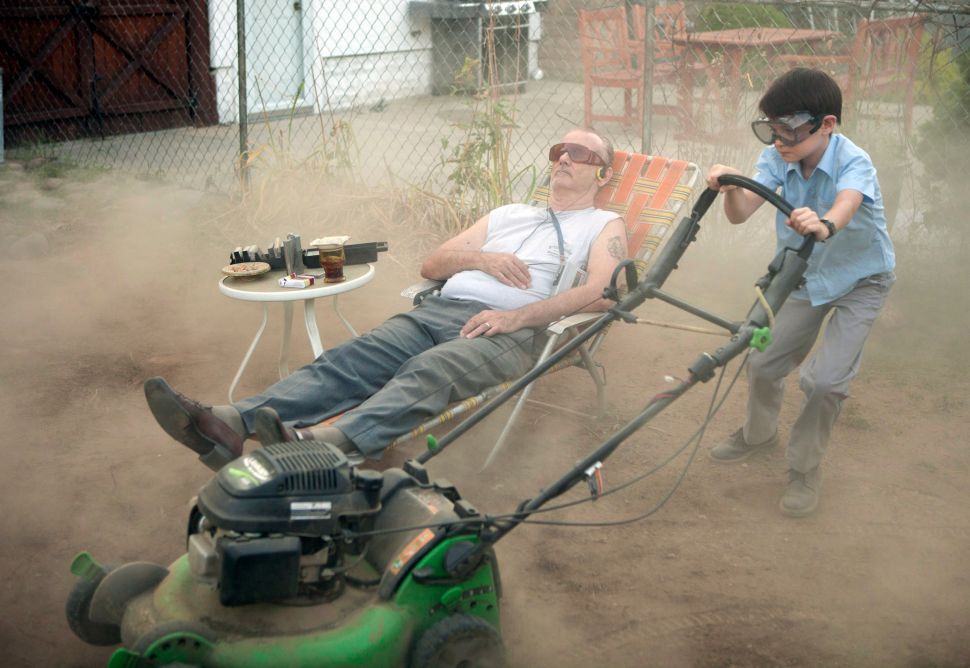