Bill Samuels, a liberal Democratic activist, is back on the war path against Gov. Andrew Cuomo, accusing the governor of doing too little to help Democrats retake the State Senate.

A prominent thorn in Mr. Cuomo’s side, the wealthy Samuels charged that Mr. Cuomo is doing little more than running “vanity ads” and promoting his poor-selling memoir–and even claimed Mr. Cuomo’s recent remark that people in an Ebola-related quarantine should read his book to pass time could end up costing Democrats around the state.

“Cuomo is harming Senate Democrats by wasting time and money on vanity ads, and making cringe-inducing gaffes about Ebola patients reading his book while quarantined,” Mr. Samuels said in a statement to the Observer. “His politically reckless behavior is endangering Senate Democrats and jeopardizing efforts to increase the minimum wage, pass the DREAM Act, and enact real campaign finance reform,”

Mr. Samuels, who now leads the good government group EffectiveNY, once headed the Senate Democrats’ fund-raising efforts and has long criticized Mr. Cuomo for hewing too close to the political center. He reluctantly endorsed Mr. Cuomo’s re-election bid this year after the governor helped broker a deal between the Senate Democrats and the Independent Democratic Conference, a breakaway bloc of Democrats that sits in the majority with the Republican party, to share power next year.

Mr. Cuomo made the deal in exchange for support from the labor-backed Working Families Party, which came close to endorsing Mr. Cuomo’s primary challenger, Zephyr Teachout. Since making the agreement, Mr. Cuomo has a times appeared noncommittal or even reluctant to follow through on his promise to empower the mainline Democrats.

He has endorsed several Democrats in competitive races this fall. However, as Mr. Samuels pointed out, he has not spent much time on the campaign trail with them or lent them his considerable financial resources.

“If Senate Democrats lose, it will be because of Cuomo. He will be responsible, not Republican,” Mr. Samuels fumed. “He should run nonstop ads for Senate Democrats in every single swing district across the state. He is sitting on around $15 million and barely lifting a finger for his Democratic allies. A few paper endorsements and last-minute rallies are meaningless.”

If Mr. Cuomo is “serious about advancing a progressive agenda,” Mr. Samuels continued, he will “immediately pull all his ads, stop promoting his book, and spend big to help Senate Democrats in the most competitive districts.”

A spokesman for the State Democratic Party dismissed Mr. Samuels as a “gadfly.”

“Bill Samuels is a gadlfy who likes to read his name in the paper. He obviously doesn’t know what he’s talking about,” said the spokesman, Peter Kauffman. 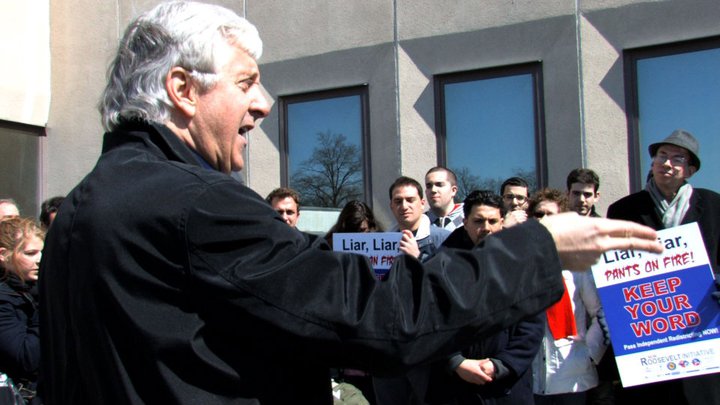