According to a recent (perhaps dubious) poll, women believe they turn invisible around age 46, leaving only a disembodied pair of control top pantyhose and some Sauconys to commute to and from work every day. Restaurants seem to fade into oblivion at a much younger age. Even if a place enjoys a supernova of critical adoration, or at least obsession, by the time it turns five years old, a penumbra of silence inevitably settles around the once feted enterprise. It is left to read Cathy comics, embittered until death overtakes it.

Millions of invisible women (with flip phones!) and transparent men (with hard-ons!) and uncool young men (with beepers!) and uncool young women (with psoriasis!) eat in invisible restaurants with great food, every night. That we are constitutionally blind to the aged and averse to experience is to our detriment. For far from being seen as a demerit, survival might, actually, be a good character trait after all. If it worked for Darwin, it might work for dinner, too. What do we miss by focusing almost exclusively on the next new thing, like an idiot dog driven mad by the flitting laser pointer? For starters, La Mangeoire, by far the best bistro in New York City.

La Mangeoire has been around for more than 30 years on an unlovely stretch of Second Avenue. It hasn’t always been as good as it is now. But five years ago, Christian Delouvrier, formerly the head chef at Lespinasse and The Essex House, took over the kitchen. Though his stars—four at Lespinasse and three at The Essex House, awarded by The New York Times—form a constellation unrivalled by any other chef in the city, the menu is strictly classic bistro fare. Ancient recipes of soupe à l’oignon gratinée, salade frisée, escargots de Bourgogne, poulet fermier rôti, coq au vin and steak au poivre are kept pure against the erosion and adulteration of time.

Perhaps because the menu is unimaginative, the restaurant is out of the way, and the interior—a Provençal fantasia of copper pans, poppy paintings and arcane farm equipment—is so uncool, little has been written about what Mr. Delouvrier delivers. When he was at Lespinasse, the Toulousian chef was the first man in the kitchen and the last out. At La Mangeoire, though in a much more humble kitchen with a much smaller staff, Mr. Delouvrier maintains his standards of excellence. Everything I ate I’d had before but never as good.

To wit: with so many watered down epigones serving as fat boy menu filler, one forgets the deep satisfying richness French onion soup ($16.50) offers when done right, as Mr. Delouvrier does. His crock is full of just oxtail broth and caramelized onions going down on a hunk of baguette under a thick blanket of vieux comté and Gruyère. It’s a make out sesh of flavor, a bulwark against mediocrity.

As soon as each escargot de Boulogne ($17.50), topped with tomato confit and a blanket of garlic and herbs, is drawn out of its little hole like a sand crab at the shore, the sea of butter gushes back. Give me this ebb and flow any day over the beach.

Of all he’s done, Mr. Delouvrier has earned plaudits for his roasted chicken, available as a 1/4 ($19), a 1/2 ($34) or a whole ($68). The praise is well deserved. Skin crisp, meat moist, with a small pitcher of natural jus made from its wings, to write accurately about so simple a dish is hard. It is what it is, just incredibly well made.

But for my money, the poultry to get is the coq au vin ($28 for one; $49 for two; $73 for three of four). As the air gets cooler, the appeal of the dish—chunks of meat darkened to blackness by a red wine and mushroom sauce, earthed out by mushrooms and glazed pearl onions, meated up by thick chunks of bacon and carbo-loaded with homemade cavatelli—only grows stronger. This and the cassoulet, coming, Mr. Delouvrier says, in November, make me yearn for snowstorms and MTA delays.

Oh, and another thing: before you die, or live another week, eat the steak au poivre ($43) with a bowl of fries. Each, in their own way, are masters of crunch, mysteries of flavor. The fries are thick-ish, crunchy yet yielding. The steak, peppercorns pressed into the flesh of the sirloin, is served with a creamy au poivre sauce that in luster and texture resembles burled walnut. I’ve had well-done steaks before, but perfectly cooked medium-rare ones rarely. We’re talking Rothko gradations of color, a meat sunset.

Correct, everything here is correct, and by being correct and so damn good, the restaurant makes the case that discipline and fidelity are just as worthwhile as creativity and disruption. Knowing one’s roots, the feeling in one’s bones, this is a labor of a lifetime. Unglamorous work, dirty sometimes, French always, Mr. Delouvrier doesn’t’ go in for buzz. But the past is littered with momentary flashes, these but lapses in long passages of ass-less praxis. The next thing, the new new, an homage to whatever.

At La Mangeoire, Mr. Delouvrier is a Spartan guardian of the ancient régime. He makes the same thing over and over and over again every night, and each time, it’s the first time he makes it. Rather than spin off his energy crafting a new take on the bistro or reinventing classics (steak au poivre with lime cornichon! duck a l’orange with ras-el-hanout!), Mr. Delouvrier perfects the old ones. He’s old guard, old school, and man, are we old fools if we don’t follow him down to his old bistro for dinner sometime. 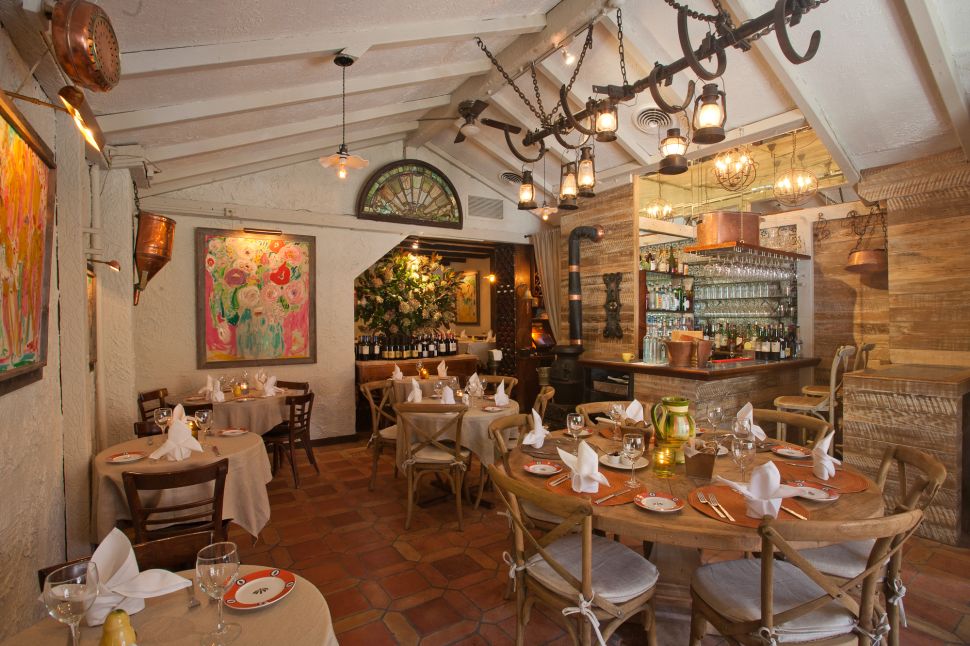