Boardwalk Empire: the show that, despite Ryan Murphy’s best attempts with American Horror Story, is probably television’s most consistent producer of nightmare fuel on television. I’m not kidding! For all we talk about this show’s grimness and the lack of “fun” Nucky seems to be having, we sometimes forget: hanging around with all those corpses with missing ears and slashed faces and Phantom of the Opera-style masks might not be anyone’s idea of a good time. (Except for Al Capone’s.)

So I wasn’t squeamish when, early in this week’s episode “The King of Norway,” a cockroach crawls across the newspaper of Al Capone’s ledger man. In fact, I rolled my eyes at the obviousness of the metaphor: that the real bug in Capone’s crew wasn’t the creepy-crawly but Mike, the undercover FBI agent whose infiltrated the highest level of the mob and is now looking to catch the press-friendly psychotic on tax evasion charges. Side-note: The fact that it’s Eliot Ness’s name, not Mike-whatever, who goes down in the history books as the guy who collared Capone doesn’t speak too well for this expendable character’s future. (See what I did there?)

That roach wasn’t strictly symbolic: it came back to haunt my fucking dreams forever when Mike reveals to a collared Eli and Van Alden, that the FBI has ways of making men talk. Ways like: covering a guy’s face with roaches and some sort of gelatinous, sticky substance that had me rocking back and forth harder than one of Gillian’s bunkmates at Dr. Cotton’s Home for Lady Criminals in Need of Having Their ‘Crazy Parts’ Removed, ASAP. (Maybe my Murphy analogy wasn’t so off, as Gillian’s asylum bears a striking resemblance in patient care to the Briarcliff Mental Institution of AHS: Asylum.) Other things that horrific scene reminder me of: 1984 with the rats; Infinite Jest with the cockroaches, and the line spit at Nicholas Brody during last season’s Homeland while he was becoming a junkie in Caracus: “You’re like a cockroach. Still alive after the last nuclear bombs go off. You belong here. Am I right?”

I was half expecting Johnny Torrio to say something similar when Nucky showed up on his doorstep, before they were supposed to meet with Maranzano to discuss the Luciano/Lansky situation. After all, Nucky has already escaped one designed hit, and he’ll live to survive another after the meeting with Masseria turns into a drive-by massacre designed by Luciano and Lansky, with help from Torrio. (Which: how did those two get to Torrio without alerting Capone? The world’s most adorable gangsters have been in New York, and Torrio, until recently, was in Chicago, and it’s hard to imagine a scenario where they just show up on his doorstop with another miniature Empire State Building.) Oblivious that he’s about to meet his end at the behest of his prodigy Lucky, Maranzano tells Nucky that he only works with other Italians.

“So where does that leave me?” Asks Nucky.

“You are Malta, an island unto yourself, loyal to Rome, but exempt from Roman law,” Maranzano muses. And a moment later bullets fly, Maranzano’s fate is unclear, and Nucky is left scrabbling around the rubble. But as his first wife, Mabel’s father told him as a young man (played with absolute perfect mimicry by Marc Pickering), he’s nothing if not tenacious.

“I should expect to like you, but I don’t,” says Mr. Jeffries, summing up Nucky’s personality–or lack thereof–in a nutshell. Nucky, both then and now, is hardworking and genial and polite, but as Mr. Jeffries says, “I don’t think you know who you are.” Nucky’s always been a cipher; opaque in his motivations and playing things close to the vest, but it’s jarring to see this smiley young deputy sheriff contrasted against the somber, cunning little boy that he was last week. Nucky doesn’t suffer from a “likability” problem, but that, in itself, is the problem. Why does Nucky do what he does? Who he is? What does he want? Why, after talking to Mabel’s father, is his next step to ask his mentor the sheriff if he can help out with the less savory aspects of being in the pocket of the Commodore? Nucky’s nice, but he’s not good, not even when he was with Mabel.

Also having a crises of self is Van Alden (who is finally busted for his Mueller alter-ego, so I’m going to go back to calling him by his rightful name). We don’t understand why his wife Sigrid is so cold to him and Eli, and Eli’s wife June, when they show up for dinner…we just know that something’s wrong. The dinner scene is perfect: Whose Afraid of Virginia Woolf where George forgot all his lines. “My real mother died, she was a ballerina,” Abigail whispers to June while serving the flatbread. Eli’s hungover, like always, and his wife is pregnant with their—what, ninth?–child. I never understood why she stayed with Eli, who has proven himself to be an alcoholic, temper tantrum-throwing sad-sack, but she seems determined to remain obliviously cheerful until Eli walks into the kitchen and is brought up short by a sense memory involving a yodeling record and a photo of King Haakon VII of Norway. Oh god…he’s slept with Sigrid in a drunken blackout.

One more stray thought about the roaches: the fantastic, fanatical performance of Michael Shannon in Bug as an escaped mental patient. His reaction when Sigrid spills the beans about the affair, is priceless in it’s lack of explosiveness. You think that Van Alden–old Van Alden, anyway–would have killed Eli on the spot, but his days as Mueller have softened him, or at least his response time, so that Mikey is able to bust up the party with his FBI badge and haul away the two men before they or their wives have a chance to tear each other to shreds.

Even then, in the station house, Van Alden and Eli can’t seem to stay mad at each other. (Shipping the two of them so hard!!! Maybe them more than Luciano and Lansky!) Eli refers to the incident as “an accident,” to which Van Alden seethes back, “You mean like a streetcar hitting a horse?”

“I don’t know about you, but my life is a fucking shipwreck,” Eli says.

“Well land-ho,” Van Alden growls. Then they share some flask whiskey because they are STILL BEST FRIENDS, OBVIOUSLY. And now they even have a caper together: to steal the ledger book from Capone’s safe to trade to the FBI so they won’t be condemned to the gas chamber for their murder of government agents (Van Alden, his former partner; Eli, Jim Tolliver.)

There’s some other stuff in the episode as well: a great conversation between Gillian and “Dr. Cotton,” when she tries to make her case for being released. She had temporary insanity when she killed that boy, but now she’s better. “How do you know what you are?” Dr. Cotton asks, before explaining that “temporary insanity” is a pretty convenient excuse for cold-blooded murder. But also, how does anyone know what they are? Nucky, take note.

Chalky White is back and town and searching for Narcisse, but instead finds his former lover, Daughter Maitland, with her young daughter at the good Doctor’s whorehouse in Harlem. Mickey Doyle is getting more savvy by the day, and I hope him and that new boy Hugh become BFFs as well.

Until next week, here’s a song to play us out of one of Boardwalk’s most ingenious episodes yet: 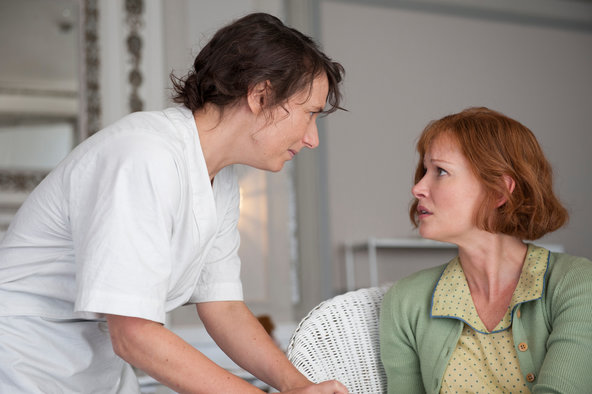