The Atlantic City/New York showdown between the Thompsons and the Luciano/Lansky/Siegel contingent finally went down last night, and it was a little…what? Anticlimactic? It’s hard to say that nothing happened, as we did lose one of our most beloved characters in the shootout last night, but to think that we’d been gearing up for this fight all season just to have Nucky capitulate to killing Maranzano himself (or, with his own crew, including Eli) just to save little Willie seemed like a left turn from the epic finale between these two mobster gangs that we were expecting.

Now that we’re onto the spoiler section of Boardwalk Empire’s penultimate episode…can you believe the New Yorkers killed Mickey Doyle? Especially when the show’s creepiest laugher had done so much to redeem himself in the last couple of episodes! Even going as far as to suggest a peace treaty between Lucky/Lansky and the Atlantic City folk. They might all swim in the same murky waters, but Luciano has had enough of Doyle’s hat-wringing and shoots him in the throat. RIP: Mickey Doyle. May you be laughing horribly with the angels now.
[youtube https://www.youtube.com/watch?v=tC46QPdp9b0&w=560&h=315]

Nucky also loses Archimedes, his ear-slitting bodyguard, in the battle. And to what end? We see that Nucky grabbed Benny Siegel in order to call this meeting in the first place, the overtures of which Luciano at first refused. But as soon as Willie was taken as a hostage for their side, the New York team was more than happy to take a meeting. Maybe because they had more leverage, but considering that they didn’t want to deal with Nucky in the first place–ostensibly because no good could have come from driving from the city to New Jersey on a weeknight–it seems like Nucky is still holding the good hand.

But when the trade is made, Benny pulls a fast one and pushes Willie back to the New York side, meaning that all the cards are now in New York’s favor. Not only does Nucky get down in the dirt to beg for his nephew’s life (making Lansky happy, considering that’s what Nucky did to him last season, although hey, Nucky let him live after making him dig his own grave, right?), but he promises to give up everything he owns–Atlantic City, his Havana-Bacardi connections (which…still exist?)–and throw in a hit on Maranzano for free. Lucky agrees, which, again, doesn’t make much sense except that now we see how Maranzano actually dies, with Nucky’s agents pretending to be Feds to gain access to the mob boss’s inner sanctum. Willie is freed to go back and work at the assistant US District attorney’s office, which doesn’t seem to bother Luciano or Lansky in the slightest. (“We’ll get your resume later,” Lucky growls.)

Meanwhile in flashbacks, we’re edging closer and closer to the real story of how Nucky ended up giving Gillian over to the Commodore. He’s taken Gillian in under the advice of Mabel, despite his argument that they can’t save everybody, all the time. We’re still not sure how this ends up leading to him trafficking in young women for the Commodore when even Sheriff Lindsey seems to blanche at this idea, but we’re seeing more of Nucky reasoning his way out of feeling guilty, especially when he’s asked to deliver the Commodore’s most recent conquest back to her mother, with “no further compensation forthcoming.” Gillian, we learned, escaped from an orphanage, where she was treated to barbaric conditions that don’t seem too dissimilar to what she is facing now in the insane asylum.

Now that Nucky has recieved her letter from the mental institution, the show has taken an interesting turn for its finale: will Nucky’s salvation lie in saving Gillian? And will he be sacrificing himself in the process? Now that Nucky has nothing left–Atlantic City belongs to the New Yorkers and he’s basically living on borrowed time–what can he offer Gillian, if not her freedom?

Tune in next week to see the end of Boardwalk Empire and find out! 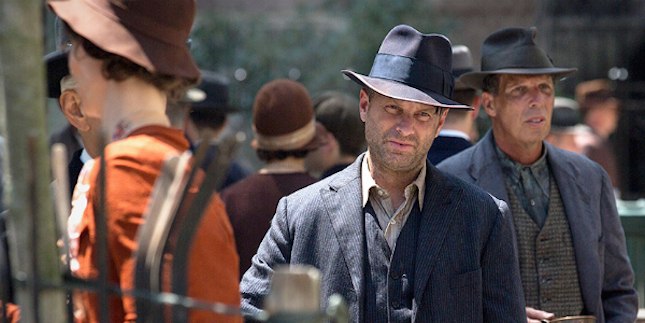