“Every new beginning comes from some other beginning’s end,” a wise man once wisely crooned in the theme song to my senior prom. How true those Semisonic words were! And how appropriate for the finale of Boardwalk Empire–a show about an existentially unmoored and amoral gangster which was created by former Sopranos writer Terence Winter–to remind us that though we will die and be forgotten, Television is Immortal.

That’s at least what I got out of the last episode of Boardwalk Empire, a show that is consistently undervalued for its amazing writing. Though Nucky and Don Draper might have the same father in Tony Soprano (lest we forget that Matthew Weiner was also a writer on David Chase’s show) and share the same gene that makes them essentially ciphers for male mid-life crises, Thompson has always navigated himself in a much more solid world than Draper. Which was why that scene on the boardwalk with the Gillian-esque girl “from the future” seemed so out of place: Nucky might have the odd flashback or vague piecemeal memory, but he’s not generally confused about reality. When he goes into that tent and sees this future girl singing “Twinkle Twinkle Little Star” on the very first television ever*, the scene is shot like a crossover of David Lynch and Metropolis: all flapping curtains and large, looming structures.

There is an argument to be made that this is the moment where Nucky finally accepts his impending demise, or at least understands it…the future will continue without him. Not that there haven’t been signs that it’s out with the old and in with the new: Luciano’s hostile takeover of his properties, Margaret’s hard-won financial and spiritual independence, Gillian’s transition from formidable foe to world’s calmest insane person (rivaled only by Mabel Thompson and her “no bigsie” miscarriage, actually). But for some reason, it’s this television set and the spooky way it’s introduced that leaves the viewer with the disquieting sense of doom on the horizon.

And what to say about Nucky’s inglorious end? At least he had been preparing for it, almost eerily so. The former gangster has been in tighter spots than this before–Gyp Rosetti, anyone?–but has never done the “Goodbye, all!” rounds like he managed to make in the finale. The whole hour was basically Nucky Wrapping It Up…with Eli, with Gillian, with Margaret and, in the end, with Tommy Darmody. In a way Nucky is lucky: how many gangsters do you think get to say their goodbyes in such a languid fashion?

So what did Nucky learn about who he was, as a man? The best descriptions of Nucky were from the Commodore, in the flashbacks to young Nucky’s final fall from grace.

“I don’t have faith in you,” the Commodore sneers at Nucky, taking away his deputy badge in what appears to be a shitty end of a shitty day for a guy who got the shit kicked out of him by his own father after finding out his wife has simultaneously had a miscarriage and gone insane. “You think you deserve something for trying hard. I never liked that…What are you in the end, anyway?”

This is not a new question. Various characters (and viewers) have been questioning Nucky’s lack of “self” since the first season, and now, after season five, I’m still not sure what made up this man: what mattered to him (family? Sort of?), the direction of his moral compass, his values. Even trying to figure out what qualities Nucky admired and which he despised in others was no easy feat, as Mickey Doyle was ostensibly the most loyal comrade he ever had, and yet was tolerated only barely, and with obvious disgust, by his employer.

But maybe this is the first time young Nucky has ever had the question posed this way before, because his response is telling. What is he in the end? “Only what I need to be.”

To which the Commodore responds: “How does that make you anything at all?”

“What do you think it says on Cornelius Vanderbilt’s tombstone?” The Commodore had challenged Nucky earlier in the episode.

“Something in Latin?” Nucky guesses.

“Whatever it is, it doesn’t say he worked hard. It’s what you leave behind. That’s the only thing anyone’s ever gonna know about you.”

So besides a hatred for the puritan work ethic and boot-strappin’, we know what made up the Commodore. He was Atlantic City, for better or for worse (mostly for worse). But in addition, perhaps the old bear was the only person who ever actually saw Nucky for what he was: an empty suit. A badge. A glad-hander and a changeling determined to be whatever he needed to be, instead of just being. The American Dream, Jay Gatsby style.

But being a vessel for the needs of others hasn’t always been easy for Nucky. “Why do you always get to be the wise one?” Eli asks during his last conversation with his brother.

This time, Nucky’s response places the onus of his personal character outward: “Because you always needed me to be.”

In the end, this is all we will get out of Nucky Thompson. Here lies a man who will have left nothing behind; who will never be known. Who, like Draper, signifies the end of an era more than a flesh and blood person.

Ultimately, Nucky was the Nathaniel P. of gangsters. Here was a man so overly-concerned with who he was to everyone else and what he was perceived as being–husband, savior, monster, mentor, boss, sheriff, treasurer, gangster, bootlegger, murderer, whatever–that he never quite got around to finding himself.

But damn, was that one well-written ride.

*Or in Atlantic City 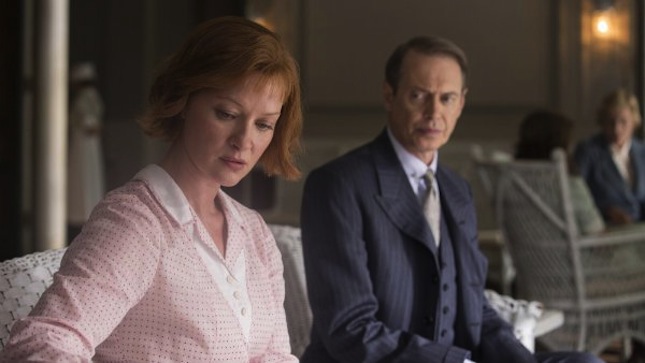