ATLANTIC CITY – An event billed vaguely in a Cory Booker for U.S. Senate press release as a campaign rally with supporters and volunteers turned out to be an energized get-out-the-vote effort not only for the Democratic incumbent but for 2nd congressional district candidate Bill Hughes, Jr., here tonight, as both pols joined other South Jersey Democrats in rousing to action a roomful of voters and “sending a message” to national organizations that this is a race worth watching.

“We don’t have to make this complicated, do we? We kind of know this already. I look around and see all the people in this room and I know that you know what I know, which is we are in the middle of an election with three weeks to go, and you turn on the news, and it’s telling you what’s going on,” Booker, voice booming over the crowd of supporters gathered for the late night assembly in the Second Baptist Church, said of Hughes’ race in CD2. “We have a nation that’s trying to take us back in many ways. I feel like Michael Jackson and I have no interest in doing the moonwalk. We have got to be a nation that keeps moving forward.”

Booker’s speech, characteristically long-winded and covering a range of issues from education to economic reform to problems with the nation’s criminal justice system, was aimed at stirring up support for his re-election campaign against Republican challenger Jeff Bell — but it also clearly endeavored to stir support for the campaign of “brother” Hughes, who faces his own challenge in unseating incumbent U.S. Rep. Frank Lobiondo (R-2) in the district. While Booker leads his opponent by a comfortable margin according to recent polling and boasts a comparatively superior war chest and support base, Hughes’ race is considerably less certain, underfunded and trailing the Republican by as much as six points.

That margin, however, has given some political observers hope for the Democrat, the son of former congressman Bill Hughes, Sr., who earlier on was thought to face near-insurmountable odds in ousting LoBiondo, a 20-year incumbent in the district. Booker’s own sudden involvement in the campaign is somewhat surprising, given the questionable political gain. But the hope for victory was nevertheless articulated by the pols present at tonight’s rally, as Booker joined state Senator Jim Whelan (D-2), Assemblyman Vince Mazzeo (D-2), and chair of the Atlantic County Democrats, Jim Schroeder, in praising the candidate’s liberal positions and urging supporters in the room to sign their name on volunteer sign-up sheets near the door.

“So this is an election again, where we have my brother Hughes, what he’s fighting for is not just a position but because he wants to go out every single day and stand [up for the district],” Booker said before blasting Washington for its political discontent.  “Please understand that at least now in the Senate, we can get some things done, but the congress has got this crazy right wing control. And it’s not even the traditional House members — these are people in the tea party putting all these things into jeopardy. And that’s why we need Hughes.”

Booker noted the district is labeled D+1 — meaning that Democrats outnumber Republicans, though recent elections have favored Republicans because of low Democratic turnout. But he pointed out that President Barack Obama drew historic voter turnout across the state in 2008, an example of the district’s untapped political power, even in an off-election year like this one.

“We have the numbers. We have the numbers,” Booker said. “But right now, we were just kvetching about this, the national Democratic party has not poured in the kind of money that the Republican national party has, because they’re not confident that we are going to turn out the vote. And so I have no disrespect to the DCCC, but I want to send them a message. That in this congressional district, people vote… that in this congressional district, we care. That is what this election is about.”

“You know the deal — there’s only one way Bill can win and only one way Cory can lose — it’s turnout,” Whelan, a former mayor of Atlantic City, said earlier.

Hughes, for his part, blasted his opponent’s record on handling the problems the embattled city faces, which include the downward spiraling of its gaming industry as some of its biggest casinos continue to face bankruptcy and impending closures. Talk of rescuing the industry with new revenue streams or expanding that industry into north Jersey has dominated the political debate in the district and in Trenton in recent weeks, and both Hughes and LoBiondo have maintained that they could best handle the fallout from those problems.

“You know, about a year ago, the reason I’m doing this, is that I saw the problems that were on the horizon. It didn’t take a rocket scientist to see the problems that were coming,” Hughes said. “It was the job of our guys in Washington to form the teams necessary to fix those problems. Twenty years in Congress — he promised to leave after 12. And now we have long term unemployment of 12.6 percent. One in five people in Atlantic County living underneath the poverty line. Should we do something different?”

Hughes also lamented the lack of support from national Democratic organizations like the Democratic Congressional Campaign Committee, which has focused much of its resources on New Jersey’s heated 3rd congressional district race between Burlington County Freeholder Aimee Belgard and Republican businessman Tom MacArthur while largely ignoring other races in the state.

But Booker also delved in topics central to his own campaign and record, including recent work on criminal justice system reforms at the federal level. He and fellow Republican Senator Rand Paul (R-KY) recently introduced legislation that would make it easier for juveniles who commit nonviolent crimes to expunge those convictions from their records, lift the federal ban on food stamps and welfare benefits for low-level drug offenders, and ban solitary confinement for children, among other things.

“This is not only a bad system wasting taxpayer funding, but this actually one of the many examples of how the criminal justice system is not only broken but biased against minorities. If you are an African American, you have almost a four times more likely chance of getting caught for smoking marijuana than someone who is not. If you are an African American you get an average ten percent longer sentence than if you are not,” Booker said. “Now I bring this all up to say that we have a crisis. This is a crisis. And I stood at my Democratic caucus in the Senate and I said to all my fellow Democrats and said look, we have a problem. This is such a broken system. It is so broken that we have more African Americans in America today under criminal supervision than all the slaves in 1850.”

He later blamed the problems the state faces under a Republican governor on a lack of engagement from Democratic voters in the 2010 gubernatorial election, when Gov. Chris Christie ousted the Democratic incumbent, former governor John Corzine.

“And the people started coming to me. They said ‘Cory, Cory, they cut funding to Planned Parenthood and now they’re closing Planned Parenthood down. Look what they are doing to us’. And I heard things like ‘wait a minute, they said the wouldn’t raise taxes but they but the income tax credit, which raised taxes on the poorest New Jerseyans. Look what they are doing to us’ … And what was my response? They didn’t do anything to us,” Booker said. “We did it to ourselves. Not because we didn’t want to win, not because we weren’t hoping to win, but because we didn’t show up at the polls.” 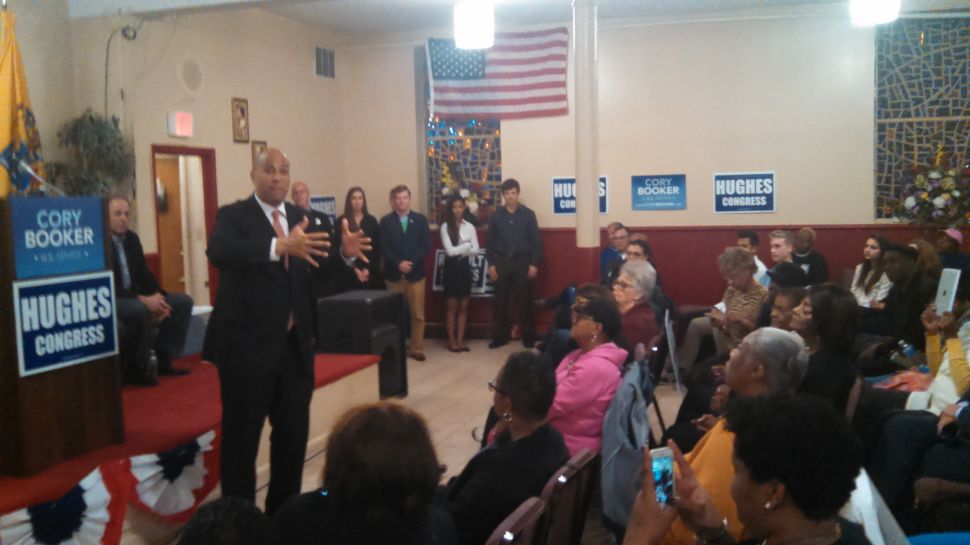