Weddings might be inherently traditional, but that doesn’t mean the industry is devoid of #tech. Zola made an app that’s basically Tinder for wedding gifts. Brides are wearing Google Glass as they walk down the aisle. Oh, and this job exists.

But wait, there’s more! Last week, Betabeat learned about Brideside, an online retailer disrupting the way women shop for bridesmaid dresses. Similar to the way Warby Parker has its much-praised Home Try-On program, Brideside lets bridesmaids browse dresses online, and then physically try them on in the comfort of their own homes.

“We were adamant about the fact that this is such a high-touch purchase – being online is insufficient,” Brideside cofounder Sonali Lamba told Betabeat. “With Warby Parker and these subscription boxes floating around, people are accustomed now to trying something on, putting it back in a box, and sending it back.”

Ms. Lamba had wanted to simplify the wedding planning process ever since her own wedding, which she had to plan while simultaneously working in investment consulting and applying to business school.

With 14 bridesmaids, she said, there was “a lack of communication that was happening across all [of my] friends — one friend was in the Peace Corps in West Africa, one was in London — I couldn’t get in touch with anyone. [There’s] so much drama associated with this process.”

Ms. Lamba met Brideside cofounder Nicole Staple while the two were at business school at Northwestern. They spent their time devising ways to monetize the wedding industry, and, at 8 a.m. the morning after graduating, started working on their company. After spending the fall of 2012 at DreamIt Philadelphia, they launched Brideside in January of 2013.

Here’s how it works. First, the actual bride consults with a Brideside stylist to establish the general bridesmaid look she’s going for. Once the stylist has an idea of the bride’s vision, the bride gets to remove herself from the process entirely, and go worry about other crap like flower arrangements and seating cards.

“The bride gets to step back after working with stylist – it’s a no-drama approach,” Ms. Lamba said. “[We let] her know at the end of the day, if your bridesmaids feel beautiful, your pictures will look amazing. Don’t make them wear something they don’t want to wear.”

With the support of the stylist, the bridesmaids browse dresses from different designers on Brideside’s online store, which are then shipped out so they can try them on at home. Brideside also provides instructional videos so the women can learn more about measuring themselves, and what kinds of dresses will look best on their bodies.

“80 percent of bridal parties have at least one girl who lives in different state than the bride,” Ms. Lamba pointed out. “Our try at home program is awesome for letting girls touch and feel the garments.”

It also saves bridesmaids the hassle of hauling themselves to the bridal salon for a Saturday morning appointment. Instead, they can “try on [the dress] Wednesday night after work with a glass of champagne,” Ms. Lamba said.

The whole process is intended to be drama-free — i.e., nothing like the showdowns we typically see on Say Yes to the Dress: Bridesmaids, Ms. Lamba assured us.

Much like Birchbox, Warby Parker and Amazon — successful online retailers who’ve gone the brick-and-mortar route — Brideside also opened up a physical boutique in Chicago this past summer. The store gave Brideside the opportunity to speak, in-person, with brides whose bridesmaids might be all across the country.

“It’s been helpful to meet more brides and convince them that the digital experience is valuable,” Ms. Lamba said. “Having the physical boutique makes [shoppers] more comfortable going online and shopping afterward. [We’re] making them comfortable with moving to an all-online model.” 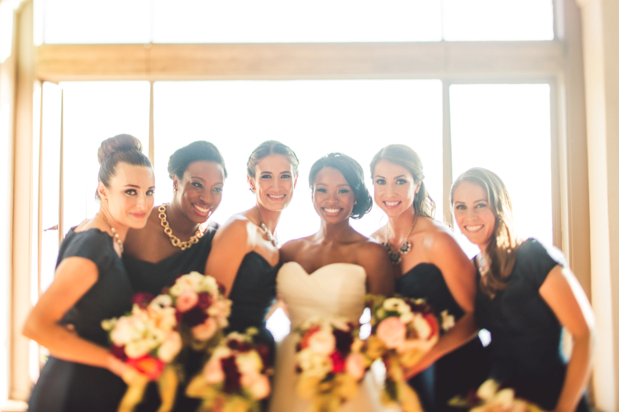