The campaign of Burlington County Freeholder candidates Tom Pullion and Mike Schmidt went up with its second television ad of the race today, slamming Republican Freeholder Board members Mary Anne O’Brien and Bruce Garganio for their records on taxes and alleged “inside deals” cut with local contractors.

“Tom and I are running because we are tired of backroom deals and business as usual on the Freeholder Board” said Schmidt, an Evesham Township Councilman, in a statement. “Under the Republican Freeholder majority, taxes are up, tuition has increased and the well-being of residents is not a concern. That will change when we Bruce Garganio and Mary Ann O’Brien are rejected by the voters again.”

The race between Democrats Pullion and Schmidt and Republicans Garganio and O’Brien has been a tumultuous one, with both parties sparring over taxes, contracts and public records violations. Earlier this week, the Republicans — who hold a 3-2 majority on the board — attempted to discredit the Democrats’ campaign by singling out and underlining the backing they’ve received from Jersey City Mayor Steven Fulop, calling Fulop’s involvement an “attempted takeover” of Burlington by a North Jersey power broker.

Watch the latest ad and read the full transcript below:

Mary Anne O’ Brien and Bruce Garganio lied and said our taxes did not go up.

But, their inside deals like the sale of Buttonwood Hospital resulted in higher taxes and lost jobs.

All while our taxes are sky high. 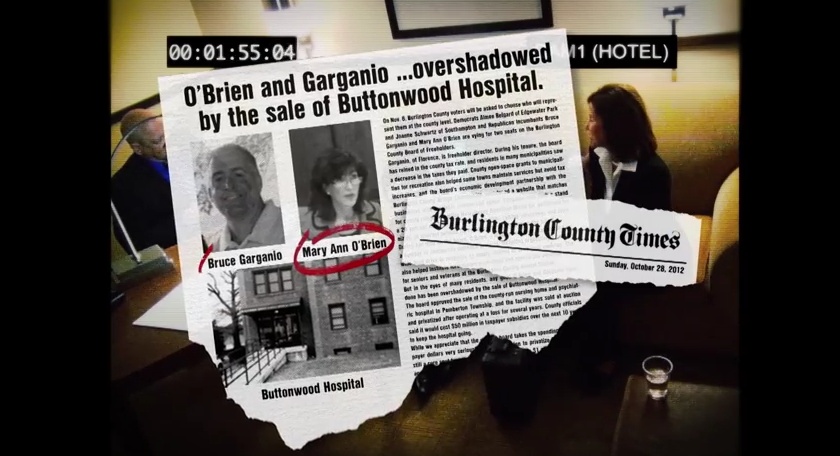