Rita Wilson, a.k.a. Mrs. Tom Hanks, has arrived at New York’s swanky Café Carlyle, a sacred watering hole for the rich and tasteful known for celebrating the Great American Songbook, for an act of insipid bubble gum rock that really makes you wonder who’s booking the place. There’s not a pinch of Cole Porter in sight, no whiff of Jerome Kern in the air. Ms. Wilson writes her own songs. They are awful.

With her Technicolor smile and open-hearted personality, Ms. Wilson looks like the kind of lady you’d like to spend a pleasant amount of time with. But not her songs. The problem is, she sings them too, and they’re not worth the effort. Half Bulgarian, half Greek, which she says makes her “Bulgreek,” is an odd mixture, but in Hollywood, where she lives, it’s better than “Bulmeek.” Otherwise, she’s a California cliché—trendy clothes from Rodeo Drive, all muscles and veins from too much gym, and too much sun from too much tennis and too many $90,000 foreign convertibles with the tops down. Think of a sunburned Farrah Fawcett.

The songs: She grew up on a diet of Carole King, Bonnie Raitt and Joni Mitchell instead of Mabel Mercer, and she imitates them all. But aside from a trio medley of their own pop-rock compositions, the music on the program features 13 tunes written by her, with a small army of lyricists, that all sound alike. You get hackneyed themes like women being strong after men do them wrong, women forgiving men, women coping with death and the humiliation of getting dumped, women deriving pleasure from each other with no men allowed, women lost, women alone, women grateful, women seeking freedom while desperately searching for love. (“Girls’ night in / it’s no sin…Drink all you want / It’s a girls’ night in.”) They’re loud and pointless, the kind of stuff teenage girls play on boomboxes outside Beverly Hills High School. Blunt rhymes (“It hasn’t always been this way / But now I’m living for today”) and immature sentiments (“When I see a butterfly / I see you and I don’t know why”) dominate. I rather liked a thing called “Talking to Me,” a sincere anthem to friendship, but Lorenz Hart wrote it better as “Talking to My Pal” in Pal Joey.

Can Rita Wilson sing? Who can tell? She has personality and her self-effacing patter is funny when she confides she went to the Emmys and ended up on Time magazine’s Top Ten Worst Dressed list along with Lady Gaga’s meat dress. Rita Wilson might not be hopeless. “Don’t give up on me,” she sings, “even when I beg you to.” And everyone tries, even though she’s in the wrong club. It’s O.K., I guess, to feed mediocrity to a crowd of brain-dead finger snappers, but not in the sophisticated room where Bobby Short held court for years, and not at these prices.

“I’m tired of holding everything inside, tired of trying to apologize,” she wails above the din of her rock band, “I just wanna have a breakdown!” I know exactly how she feels. 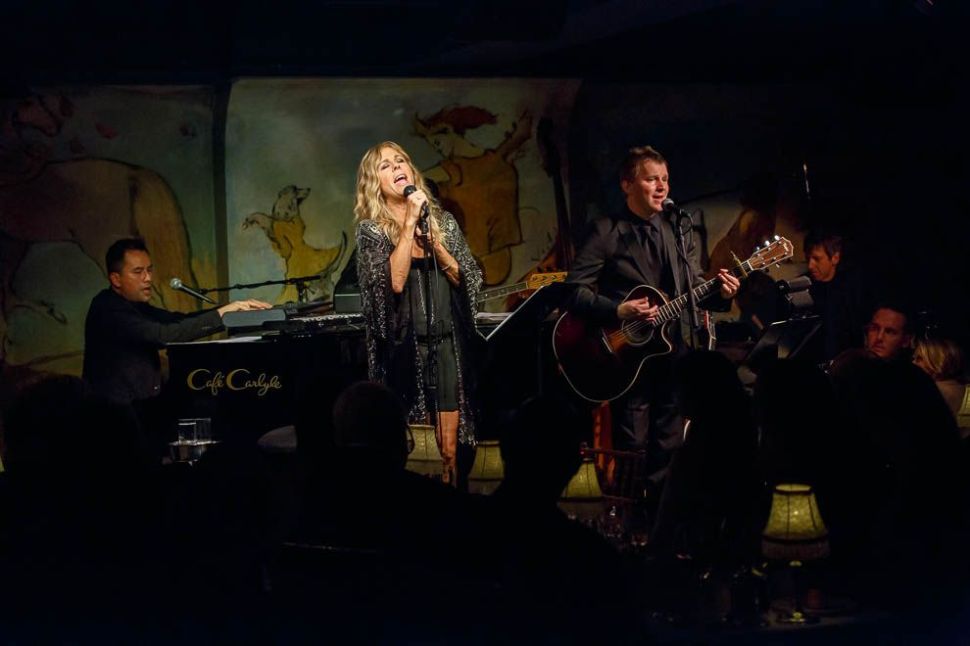