Last Saturday, Congressman Michael Grimm, a Republican who is facing a 20-count federal indictment, eagerly invited reporters to attend a campaign rally on Staten Island. That same weekend, Domenic Recchia Jr., his once formidable Democratic opponent, held his own rally in the borough.

Reporters were not invited.

The actions of the two candidates on that balmy fall weekend were ironic. Mr. Grimm once threatened to throw a television reporter off a balcony and openly bristles whenever his legal troubles are brought up. Mr. Recchia, a former Brooklyn councilman with a booming war chest, is fighting to get his name recognition at Mr. Grimm’s level.

But in the final month leading up to Election Day this Tuesday, Mr. Recchia has been all but invisible to reporters on the campaign trail, rarely sending out official campaign releases or holding press events. A series of cringe-worthy gaffes, amplified by a Daily Show skewering, appear to have forced Mr. Recchia, riding high after Mr. Grimm was indicted in April, to stay clear of cameras and microphones.

“Avoiding the press is the only surefire way for Recchia to keep his foot out of his mouth,” a Democratic operative said. “The more time he spends on the record about specific issues, the less likely it is that Recchia can convince anyone that he’s qualified to be a member of Congress.”

Participating in his first high profile race–Mr. Recchia won several City Council elections in southern Brooklyn, none of which drew wide press attention–has meant many new challenges for Mr. Recchia, an attorney known for his deftness in political backrooms. In September, after participating in an organized labor roundtable, Mr. Recchia failed to explain on camera the definition of a certain free-trade agreement central to the discussion that day.

It wasn’t just that Mr. Recchia blundered. He genuinely appeared to have no idea what the free-trade agreement, known as the Trans-Pacific Partnership, was and countered by pointing to Mr. Grimm’s allegedly poor rating from an organized labor group. The problem? He couldn’t even name the group that had rated Mr. Grimm so low.

“He has a 44 percentage record on labor. My record is much higher,” Mr. Recchia babbled.

The next day, at a press conference where Senator Charles Schumer endorsed him, Mr. Recchia defended his missteps by telling reporters he had “great knowledge” of foreign affairs. He said he could match Mr. Grimm’s experience because he once ran a foreign exchange program at a local school in Brooklyn.

Jon Stewart, the host of the Daily Show, would give the little-known candidate a brief star turn in a five minute segment that aired several weeks later. Mr. Stewart dubbed the segment “Wait, How the F@#k Does That Happen?”

The running joke: How could someone like Mr. Grimm, an indicted hot-head with a dubious past, actually be polling ahead of Mr. Recchia? Mr. Stewart had an answer.

“So the Democrats are blowing this,” he later added, dropping the Brooklyn accent.

Since September 19, the day Mr. Schumer endorsed Mr. Recchia, the Observer has not received a single email from Mr. Recchia’s campaign extending an invite to a public event. The Observer confirmed several times since that it has remained on Mr. Recchia’s mailing list. (A statement from Mr. Recchia commemorating the two-year anniversary of Hurricane Sandy was received on Tuesday night.)

Mr. Recchia’s forays in front of the press this month have been at two televised debates and civic association forums where candidates in the Staten Island and Brooklyn-based district are expected to show up. Several reporters, the Observer included, attended an event on October 8 where the large municipal union DC 37 endorsed Mr. Recchia. DC 37, not the Recchia team, extended the invite.

Since then, Mr. Recchia’s team has been trying to limit his unforced errors by keeping him away from reporters, observers say. Mr. Grimm, a more articulate and telegenic presence on the stump, is taking an opposite tack, increasingly inviting media to attend events and mocking Mr. Recchia’s missteps whenever he can.

Mr. Recchia’s public events have only decreased with time. Throughout the spring and summer, reporters would occasionally be invited to campaign stops, like kitchen roundtables Mr. Recchia held with sympathetic voters and tours of local pizza parlors.

“Recchia has never had this level of exposure in media outside of the community newspapers,” said Richard Flanagan, an associate professor of political science at the College of Staten Island. “I don’t think he was completely ready for it. I don’t think he was well-served in terms of training or other things.”

Mr. Recchia’s camp insisted they were holding many public events, though they did not clarify why invites to the press were so few in number.

“Domenic has had a lot of public events,” Sarah Weinstein, a spokeswoman for Mr. Recchia, said in an email. “He’s also been attending community events across Staten Island and Brooklyn, and has been joining volunteers to knock on doors and speak with voters.”

2014 may still be the year the Democratic Congressional Campaign Committee, which has invested heavily in Mr. Recchia, redeems itself after a disappointing 2012. President Obama won the district, still packed with plenty of Republicans and conservative Democrats, that year, but the Democratic candidate, Mark Murphy, foundered against Mr. Grimm.

For all of Mr. Recchia’s missteps, Mr. Murphy–once an aide to Bill de Blasio, then the public advocate–infuriated local Democrats far more. While Mr. Recchia continues to campaign in the district, sans press, Mr. Murphy seemed to hardly campaign at all and frustrated operatives, who claimed he would not follow basic directions. Mr. Murphy also had no political track record, unlike Mr. Recchia, the former chair of the council’s powerful finance committee.

“Domenic’s profile in the Democratic party and his record of achievement during his tenure as a member of the Council far outpaces anything Mr. Murphy has ever dreamed of,” a Democrat closely watching the race gloated. 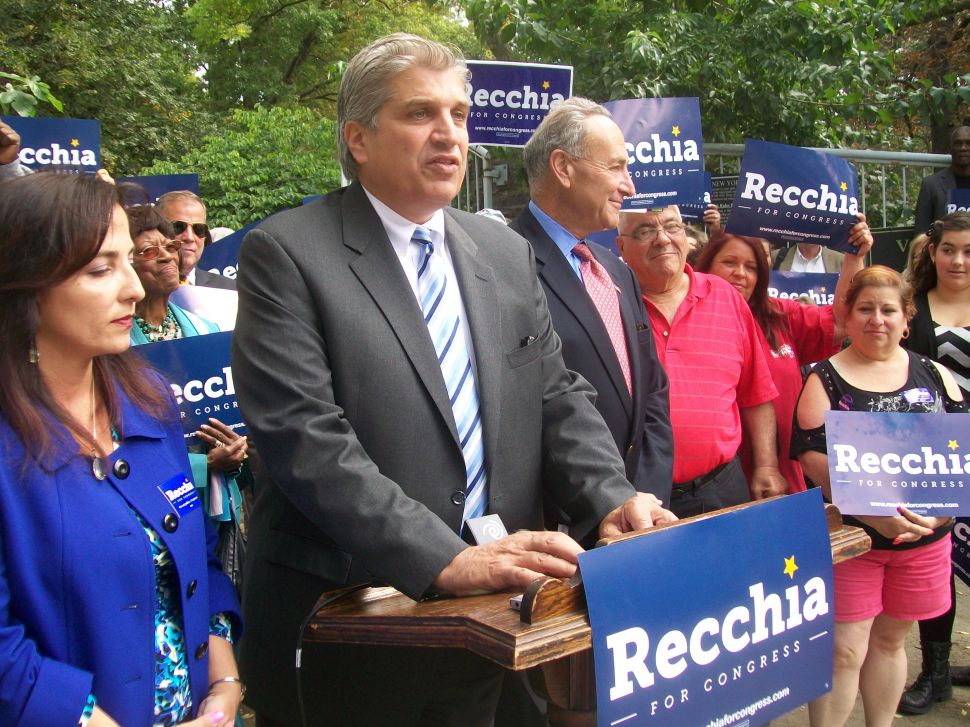