The New York Post reported Monday that a carriage horse bolted up Eleventh Avenue near West 37th Street while its handler was attempting to bathe it. Two police cars followed the runaway horse as it trotted through Hell’s Kitchen in an effort to box it in.

The NYPD eventually calmed and restrained the rogue horse, but the activists who released the video are outspoken about their concerns for the horse’s well-being.

“We have no confirmation of how the horse is doing,” said Allie Feldman, Executive Director of NYCLASS, the group that left a fake dead horse outside a council-member’s house.

Ms. Feldman went on to say that the horse should not have been bathed in the cold morning weather, as they spook more easily when chilly.

This incident is bound to spur NYCLASS on further, with the legislation banning horse-drawn-carriages they were promised still not being delivered.

NYCLASS issued a statement saying, “This is the latest example of why horse-drawn carriages are not just inhumane but entirely unsafe in a city congested with cars, trucks, and buses. It is time for the City Council to act and get the carriage horses off the streets of New York City.”

Although the horse may have developed a taste for freedom, it has since been safely returned to the stable. 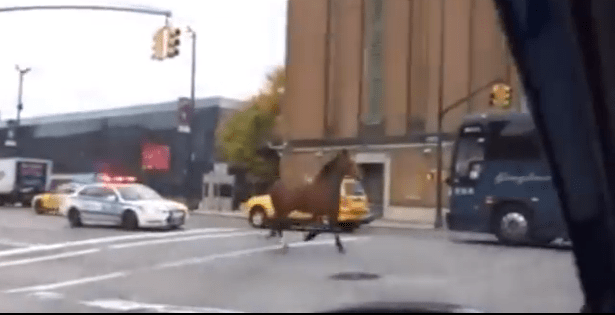