On Sunday, CBGB Holdings, LLC took over Times Square with an event that, like most things Times Square, was a bizarre combination of corporate and populist, idealist and dystopian … a literal representation of punk rock’s appropriation and commoditization. Then again, it was probably wiser for the rich people who now own the CBGB brand to engage in this type of naked excess than to make any feints at “subversion” or “authenticity.” Much like the Broadway shows advertised all around it, this concert never pretended to be cool, which actually made it easier to enjoy on its own terms. CBGB has been dead so long that there’s nothing left to desecrate.

The first thing I noticed on arriving was that it was hardly the clusterfuck I’d expected; perhaps the intersection of “people who will go to Times Square” and “people who like CBGB-branded things” was not as massive as I’d thought, or maybe a bunch of people stayed away because they feared it would be too crowded. (A third option is that Times Square is just really massive.) The second thing I noticed was that it was mighty quiet; the concert took a two-hour intermission in the middle so as not to disturb the Broadway matinees.

I took the chance to walk around the “six blocks of free activities,” which included a Redbull-branded skate ramp, a Caffe Vita sampling station, a Guitar Hero arcade, and a rock-climbing wall lit by the holy glow of the Times Square Applebees. There was one of those giant, rolling ads comprised of a plastic cube with humans inside, courtesy of the Greater Fort Lauderdale tourism bureau. To add insult to injury, there was a “dunk the punk” tank. How long until guys dressed like Joey Ramone join the freelance Disney characters roaming the streets hassling tourists to pay for photos with them?

This was actually the perfect climate in which to see Devo, a group whose future shock and postmodern doomsaying is often eclipsed by their massive pop appeal. How massive? I’m a casual Devo fan, having received their music mostly through cultural osmosis, yet I knew almost every song they played. Of course they played “Whip It,” but also “Girl U Want,” “Uncontrollable Urge,” “Mongoloid”… even their cover of “I Can’t Get No (Satisfaction)” was an entity distinct from the legions of other covers folks have attempted. Through it all, they danced around the stage in their yellow jumpsuits and funny hats as the diverse audience of Devo fans (and kids of Devo fans) rejoiced. Mark Mothersbaugh was especially on point, stripping down to his t-shirt, shorts and kneesocks and dancing around like a naughty scientist as ads for the Lion King and the stock market ticker scrolled above him. “Are we not men?” he repeatedly inquired, to enthusiastic shouts of “We are Devo!”

Because I am not yet jaded enough to leave a place where a famous band from my childhood is about to play for free, I suffered through a person called Robert Delong, who as far as I can tell is a poor man’s Justin Timberlake mashed up with EDM. (Congrats on the most basic drum solo I’ve ever witnessed.) Soon enough, though, Matt Pinfield of MTV fame came out to introduce Jane’s Addiction, who were receiving the fest’s “Icon Award,” sincerely using the phrase “they’re so relevant.” Show, don’t tell?

At one point, he began reading off the stock market ticker, then yelled “who gives a fuck! I wanna be happy! I wanna fall in looooove,” to massive cheers from the crowd. Then he un-buttoned his vest a little and posed for a crush of iPhones at the front of the stage. There was nothing to do but wave my Express-branded lite-up pool noodle and sing along. 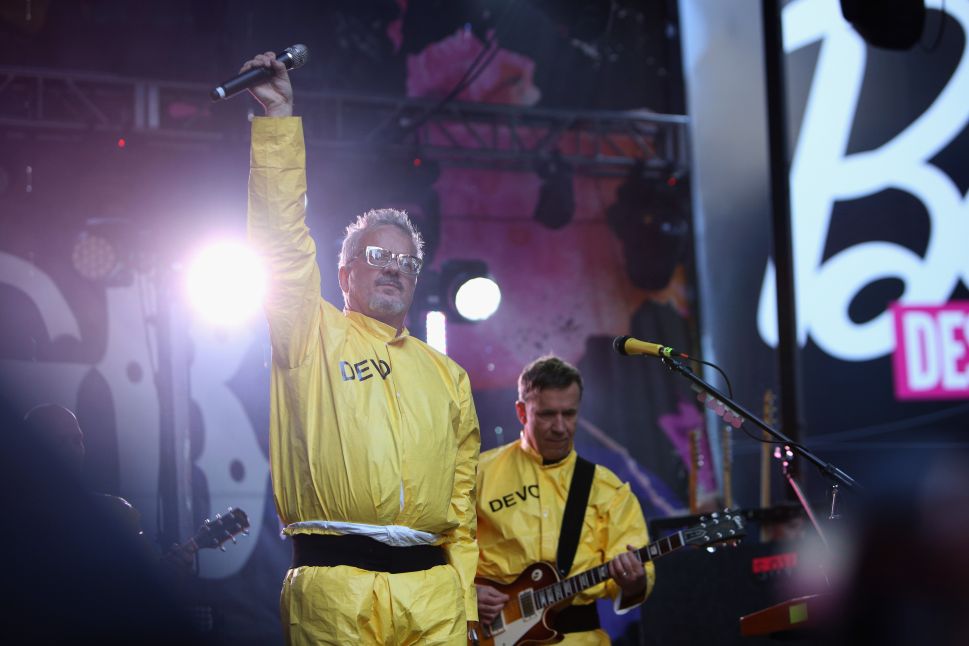