MOORESTOWN – Anyone looking to see sparks fly at the second meeting — but first official debate — between third congressional district candidates Aimee Belgard and Tom MacArthur tonight might have come away from the event somewhat disappointed, as the hawkish and aggressive Republican met a deflective and sometimes shaky Democrat.

It might have been the setting, a packed auditorium at Moorestown Middle School deep in the heart of Burlington County, where Belgard herself serves as a freeholder. But during the 90 minute debate — which did see the candidates trading a handful of attacks and staking out positions on issues, from healthcare to immigration to rescuing social security — Belgard struck an upbeat tone while her competitor, a businessman from North Jersey, took almost immediately to offense.

“We’re going to talk about a lot of things, over the next 90-minutes, a lot of issues,” MacArthur, stern-faced under the stage lights, said during his opening remarks, which came second to Belgard’s mostly positive opening. “And I want to introduce myself first because on November 4th, you’re not just going to send a political party to Washington, you’re going to send a real live person, with experiences, and convictions, capabilities, opinions … Now you’re going to hear tonight a different story about my life. You’re going to hear my opponent, I suspect, parroting talking points from her national handlers in Washington D.C. Because Aimee has, and I believe she will continue to attack my career in business. That doesn’t change that I created thousands of jobs, and as a local elected official, Aimee taxed jobs.”

Vying for a seat soon to be vacated by retiring U.S. Rep. Jon Runyan (R-3), Belgard and MacArthur have been locked in a grueling general election battle that has already produced a number of political controversies, from allegations that MacArthur, a former insurance executive,  shortchanged disaster victims by denying claims of workers to scathing attack ads by the Democratic Congressional Campaign Committee, the national organization backing Belgard. Predictably, many of those issues resurfaced tonight, as both candidate’s fielded questions from a panel of moderators — and later from guest-submitted questions — and struggled to curry favor with the roomful of South Jersey residents who seemed to lean Team Belgard, if not split evenly between.

Belgard was by turns cheery and passive, defending the Affordable Care Act when prompted with a question about healthcare access in the Burlington/Ocean County district, blasting Congress as “broken” during her opening remarks, arguing against “”pushing the goalpost down the field” when it comes to fixing Social Security, and, during a response that drew gasps and scoffs from some sitting in the aisles, backed Americans’ 2nd Amendment right to bear arms (“my husband owns guns,” she admitted). But she did show spurts of combativeness, taking the Republican to task when the two were asked about campaign finance reform.

A 30 year veteran of the insurance industry, MacArthur boasts some serious personal wealth, which has translated into an equally serious war chest for his campaign. He’s poured some $3 million of his own cash into his campaign already — compare that with the $800,000 Belgard has raised — and told PolitickerNJ this summer that he’ll spend “whatever [he] needs to to get our message out.” It’s a benefit — and one that he defended tenuously tonight as an expression of “free speech … but there has to be a balance”  — but at the same time somewhat of a liability for the Republican, as his opponent has used it to cast him as well-funded carpetbagger trying to buy his way into Congress.

“It’s become very apparent in this race, as my opponent has said, to the Philadelphia Inquiry after spending millions of dollars against me, that Aimee Belgard will never outspend me, he has plenty of resources,” Belgard said tonight, referring to an interview during which MacArthur touted his personal wealth to the paper. “Well you know what, that’s not what an election is about. It’s about serving the people, working for the people. And that’s what this is about.”

She also blasted the Republican over another dubious financial connection during a discussion about alternate energy — his investment in Russian and Chinese oils companies like Gazprom and the Chinese National Offshore Oil Corporation (CNOOC). MacArthur has some $115,000 in direct investments in those companies.

“The Russian company is Gascom, that has been sanctioned by the United States and the European Union for their involvement in removing the gas power from the Ukraine,” Belgard said. “So I think that is a real conflict here. I also think that when I hear things like we need to exploit every resource at our disposal, that gives me great concern.”

But despite having the home field advantage and seemingly majority support of the mixed-age crowd — the room erupted in applause for the Democrat’s opening but produced only a handful of clap-clap-claps for the Republican — Belgard was notably at times unsteady and aloof, stumbling through some answers and refusing outright to respond to other taunts from her opponent (though the moderator made clear she was not obligated to answer those taunts). After absorbing Belgard’s criticisms about his wealth, MacArthur struck back with his own critique of Belgard’s connection to the DCCC, raucously claiming that the Democrat has been “bankrolled by her handlers in Washington D.C.”

“They are spending thousands on ads against me and against who I am,” MacArthur said, referring to the DCCC-sponsored media buys. “For one ad — not even two ads — to come off the air, so false, so defamatory — and yet they don’t care about the people in Burlington County, and in a sense, my opponent is getting the advantage of other people smearing my good name. And I think that is a corrupting influence.”

Later — twice, actually — MacArthur called on Belgard to “disavow ads that are are based on lies — there’s no place for that,” a demand he’s made routinely since the first ad was taken down last month under threat of lawsuit by the MacArthur camp, followed by another forced takedown just last week. Belgard refused to even acknowledge the request, opting instead to share with the audience a story about a woman who gave her last nine dollars to the Democrat’s campaign (it was unclear, however, whether Belgard actually accepted the woman’s donation).

It wasn’t the only challenge by the Republican that Belgard skirted, refusing — again, during two separate instances — to articulate her stance on whether instate tuition should be granted to the children of undocumented immigrants in the state. MacArthur offered what he called a “tough but fair” position on national immigration reform that fell hard on those immigrants and their children, while Belgard advocated for alternative paths to citizenship — then fell silent when MacArthur asked where should stood specifically on the instate tuition question.

The crowd responded with snickers — the only time they rreacted outside applause before and after the ordeal — when MacArthur joked that Belgard lacked a real opinion on immigration
.

“I have my position on my website,” MacArthur said. “Aimee does not. She has yet to take a stance on the issue. What she just gave you was mine.”

On other questions, however, the two rivals — who are tied neck-and-neck in the South Jersey district according to recent polling — found themselves largely in sync, agreeing on issues like the use of hydraulic fracking in the state (dangerous, according to both), improving support for military veterans and investing in the area’s joint McGuire-Dix-Lakehurst military base, stimulating the economy and creating jobs, and saving the U.S. Post office (an “American Institution,” according to Belgard).

Belgard said she wants to take “one step forward and represent the people of South Jersey.” But MacArthur, refusing to wax friendly even during his closing remarks, returned to slamming Belgard for offering little more than “political talking points,” refusing to debate, and maintaining that he is the one committed to doing the real work of helping South Jersey residents.

“I’ve been open for many, many months. This is our first debate. I asked for debates in June, July, August, September, and here were are in October, finally sitting down at the table together. I think my opponent has been hiding,” MacArthur said, sorely.

Tonight’s debate — hosted by the League of Women Voters — was technically the first of the campaign, though the two met face-to-face last week during an interview for NJTV’s “On the Record.” Their next will take place on October 15th for a Leisuretown Candidate’s Night in Southampton. 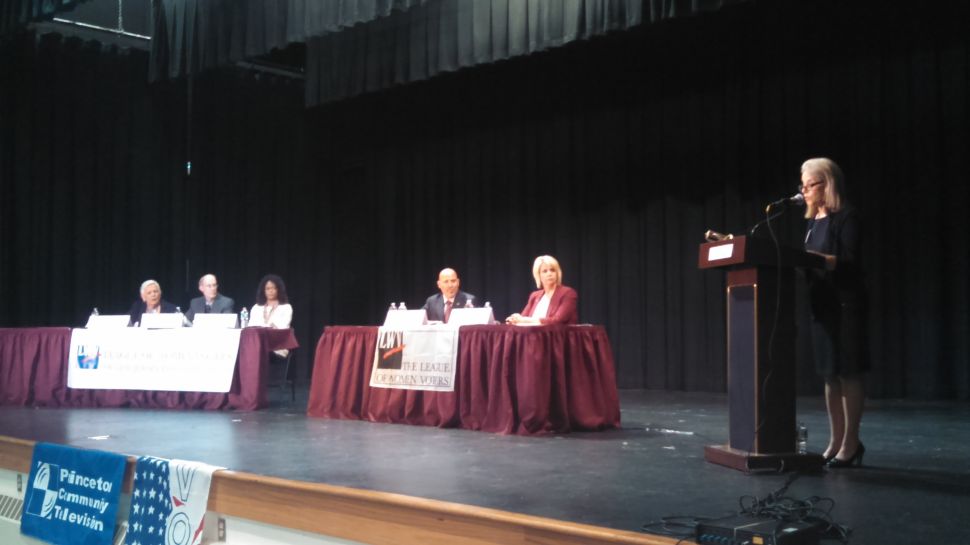