By most measures and by many accounts, Gov. Chris Christie appears as prepared as ever to hit the road to the White House — or at least the first leg of the dirt path to the Republican  primaries — beginning next year. He’s built a national profile as the head of the Republican Governors Association, raising millions of dollars for the organization to date. He’s built relationships with top donors, some of whom consider him a frontrunner for the party’s nomination. And he continues — for better or worse — to be the center of attention on many current issues facing the state and country, showing up on morning talk shows and making national headlines.

Indeed, if a Christie candidacy depended on his national profile alone, the Garden State’s chief executive might find himself ready to declare his bid by the end of this year — or better yet next month, granted Republicans take the Senate and his gubernatorial prodigies in places like Florida and Connecticut come out the other side of Nov. 4th winners. That would certainly give him the sort of momentum needed to set him ahead of the pack of other prospective candidates, none of whom have yet declared, but many of whom, from Jeb Bush to Kentucky Senator Rand Paul, could pose a real challenge to the more moderate Christie. (For a complete — but completely unscientific — ranking of possible Christie challengers, see here).

But presidential viability often does not depend on national standing alone, and, for Christie, there are still a few obstacles he’ll need to clear at home if he wants to enter the race baggage-free.  His latest job approval ratings, for instance, are in the toilet. The state’s economy, despite his best efforts to shift the blame onto Democrats and predecessors, is still sputtering, and he’s still taking flak for it. He’s also still dogged by the ever-looming threat of Bridgegate, the supposedly ongoing investigations of which still could detonate in time to destroy his reputation — and along with it any real hopes for a successful presidential candidacy.

The big question in all of this is not only whether and to what extent these issues — the economy, the polling numbers, the scandal — might negatively impact Christie on the campaign trail, but also how they might factor into his own decision-making process if it comes to declaring a run, and when. As it stands now, Christie has given himself a deadline to decide on a run not long after the new year begins. Sources say that decision is likely to come even sooner, in the first few weeks of January, and confirm what many have presumed all along.

After that, he’ll face his next decision: when to actually vacate the governor’s seat, a place he’s grown accustomed to over the last five years.

This past summer, Essex County Executive Joe DiVincenzo said Christie will leave Drumthwacket only if he lands the GOP nomination for president in 2016. “He’s sticking around,” he said. “Everybody thinks he’s leaving early, but he loves the job. If I was him, would never give it up.”

For their part, the political experts PolitickerNJ talked to about Christie’s presidential campaign timeline seemed split over the governor’s departure. Some, citing his recent notoriety and need to get out ahead of the pack, say it will come sooner, with a resignation shortly after his State of the State address in January. Others contend it will come later, perhaps as far off as Super Tuesday, when public perception will allow for a clearer view of his prospects within the party, and long enough for him to play out his term. Both departure points bring with them their own advantages and challenges.

Matthew Hale, Associate Professor of Political Science at Seton Hall University noted that Christie would benefit from leaving the seat “sooner rather than later,” saying that Christie, faced with a plethora of other formidable candidates on the campaign trail, some more popular and better connected, might want to establish himself earlier on as the moderate-to-beat in the race.

Hale pointed out Christie did “quite a bit of waffling” during the last presidential cycle, when there was talk of him leaving the seat to run for the nomination or join Mitt Romney’s ticket as Vice President. By  leaving the office early, he could avoid that sort of waffling again and much of the noise that comes with it.

“I think because he doesn’t want Jeb Bush to gain steam, he doesn’t want Mitt Romney to have the delusions that he could try it again, and I think as soon as he feels that he sufficiently clear of Bridgegate and things like that then he’s going to put himself in as the centrist Republican in the race,” Hale said. “And I think he would want to do that ahead of the pack.”

Christie has also enjoyed his recent notoriety on the national level, stumping for gubernatorial candidates in heated races across the country. Ten races are still in play at this juncture, many of which feature are seats held by Democrats and that could turn into Republican pickups next week. Christie would be supremely positioned to capture and capitalize on those wins, according to Patrick Murray, Monmouth University pollster, who noted the races provide key opportunities for Christie to round up Republican support.

“He can play into being partly responsible for that,” Murray said, referring to the potential GOP gubernatorial pickups. “That is an opportune time for him to go into the race.”

But it’s not just gubernatorial races that are in play — Republicans are also looking to come away with big wins in the House and Senate, where they hope to wrestle from Democrats majority control. (Larry Sabato of Sabato’s Crystal Ball says bet on it).

“That’s another calling card,” Hale said. “And he can ride that potential mini-bump of the Republican brand.”

“The only thing that would change that is somehow there was an incredible tsunami where the Republicans start losing left and right,” Murray added. “That puts his decision off longer because he can’t count on that immediate support.”

And while leaving early would force Christie to reconcile low polling numbers and a floundering economy at home with his own personal political ambitions — a balancing act that may prove difficult for the Jersey boy whose home state he holds so dear — he may have to concede the office anyway in the interest of a presidential campaign. That’s because pay-to-play rules, engineered by the SEC, forbid federal candidates from accepting campaign contributions from investment firms that do business in their states. It’s the same problem he ran into in 2012, when Romney’s team had considered him for VP — though during that time it was Christie who refused to leave, and Romney’s team who realized they wouldn’t be able to raise enough money with him still holding onto the governor’s chair.

For Christie, the SEC rules dash any hopes that he might be able to campaign for president and live out the rest of his tenure as New Jersey top executive — at least not publicly. Insiders says another option would be for Christie, who’s already built the connections through his RGA chairmanship, to have powerful super PACs do his fundraising for him, quietly and on the sidelines, while he retains the governorship for the remainder of his term.  As others have pointed out, the strategy would allow Christie to rely on PACs to collect millions — from Wall Street and other places — that he, technically, wouldn’t be able to accept into his own campaign account, but which could still be put toward assisting his presidential campaign in 2016.

Yet still another scenario could involve Christie ignoring the rules entirely — or, at least, arguing that they don’t apply to him.

As Steve Kornacki (also a PolitickerNJ alum) pointed out last year, the other federal restriction that would prevent Christie from serving as governor and campaigning simultaneously comes from the Municipal Securities Rulemaking Board, which bars employees of firms that underwrite state and municipal bonds — and, more recently, employees of firms that advise state pension funds — from donating to any official seeking federal office who has any role in giving business to bond firms. Christie is in charge of appointing overseers to the state’s own pension and cash management funds, making him close to decisions involving the  investments of those funds, which means he could be subject to the MSRB rule. But according to some, Christie might make the case that the restriction doesn’t apply to him — similar to the argument he’s used recently to defend himself against the state’s recent questionable investment decisions.

“The idea is you’re not allowed to give to the campaign of any candidate who is in a position where he oversees and official investment fund,” Ben Dworkin, Director of the Rebovich Institute of Politics at Rider University, said. “Now Christie could argue that it’s ‘not me — people get appointed, I don’t talk to them, I don’t have any influence over them.'”

Dworkin now sees Christie’s potential use of theses loopholes as part of an increasingly likely scenario, given Christie’s commitment to his home state. Either would allow him to stay on as governor while still raising the money necessary for a presidential run on the side,  though the latter strategy — fighting the MSRB’s restriction — would likely face serious resistance from critics, particularly national Democrats. But if Christie does decide to run for president, it might be a risk he’s willing to take, in order to keep from having to resign.

As for his recent polling numbers in the state, Dworkin said they don’t make “one iota” of difference.

“The numbers he has to worry about are New Jersey’s economy. You know, the conversation he that he had with Chris Wallace, that matters more,” Dworkin said, referring to Christie’s recent appearance on Fox News. “That’s the attack he’ll have to defend. Someone who says, ‘you know, governor, your state has lagged behind the nation, it’s lagged behind every other state in the region, and yet you say you’ve cut all these taxes. Why should Republicans trust you to run the national economy when you haven’t been able to run your state economy?’”

Updated to reflect SEC and Municipal Securities Rulemaking Board restrictions. 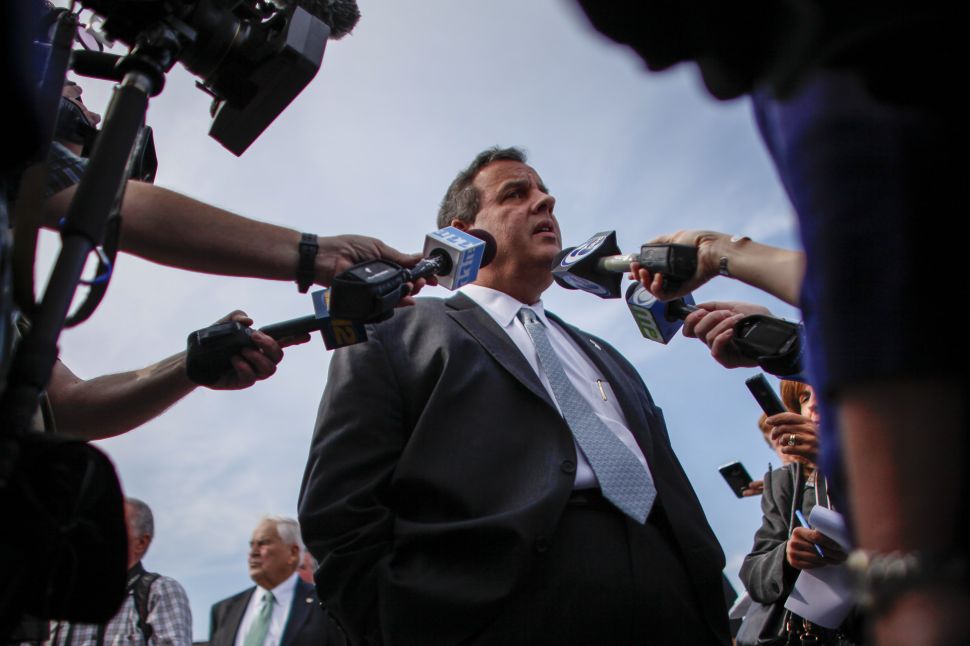