TRUMBULL, CT – He arrived late, said a few quick hellos, and even worked the phones inside for a while (“Hi, I’m Gov. Chris Christie and I was wondering if Tom Foley had your support for governor of Connecticut in November,” he said) — then fell to reaming Democrat incumbent Dan Malloy on a stage facing a crowd of ardent supporters gathered outside the small campaign office here today.

“I know governor Malloy says lots of things during his campaign, he said lots of things during the campaign in 2010 too,” he said, appearing here today to stump for Republican gubernatorial candidate Tom Foley. “I remember him looking right into the camera and saying ‘Let me be very clear — we’re not going to raise taxes.’ How’d that work out for all of you? I know that Governor Malloy ran in 2010 and looked into the camera and said he was going to create jobs. How’s that worked out for you? The fact is Dan Malloy is a good campaigner but he’s just not a good governor, and you need to give him the pick slip.”

Flanked by Foley and local pols like Trumbull Mayor Timothy Herbst, Christie blasted the incumbent over his record on jobs and

the economy and argued that he and other Republican governors across the country are “still not happy about the fact that we lost this race four years ago by 6,400 votes.”

“We want to make sure that we give the the voters of Connecticut a second chance,” he said. “See four years ago we got it wrong, just by a little. This time, we’re going to get it right.”

It was the New Jersey governor’s second visit to the Nutmeg State since Foley and Malloy began their race late last year — a race which Christie has called one of the most competitive in the country. He was in Stamford last month and Greenwich earlier this summer, both times drumming up support for Foley as head of the Republican Governor’s Association. But as a neighboring Republican governor in an overwhelmingly blue state, Christie said he can also sympathize with Foley’s challenge.

During earlier visits, Christie and Foley — the former with national political ambitions going into 2016 and the latter locked in a grueling battle with Malloy — were met with protesters, mainly gun reform advocates railing against the conservatives’ refusal to implement stricter gun laws in their states. Those protesters were nowhere to be seen today, however, as both pols were met with cheers and applause by the crowd of Republican supporters.

Christie called job creation “the only issue” in this campaign.

Christie, of course, faces his own problems at home. His approval rating among New Jersey voters is at near record lows, and his legacy — along with his future political ambitions — continue to be plagued by controversies old and new. He’s also been lately criticized for neglecting problems the state faces at home and instead opting to spend serious time out of state, where he’s campaigned for gubernatorial candidates like Foley as head of the RGA.

Ian Sams, spokesperson for the Connecticut Democratic Party, returned Christie’s criticism by pointing out those struggles. (Malloy today held his own presser in Hartford, where he announced the release of the state’s 2013 Uniform Crime Data Report).

“Chris Christie’s record in New Jersey is worth running away from,” Sams said in an email. “Under his leadership, New Jersey’s credit rating has been downgraded a record eight times, the state is 48th in private sector job growth, and he’s been plagued by ethical questions and scandals. The Republicans he’s campaigning for, like Tom Foley, need to answer for that dismal record. It’s pretty clear that Tom Foley would push this agenda as governor – showing, yet again, just how out of touch Foley is with the needs of working people in Connecticut. 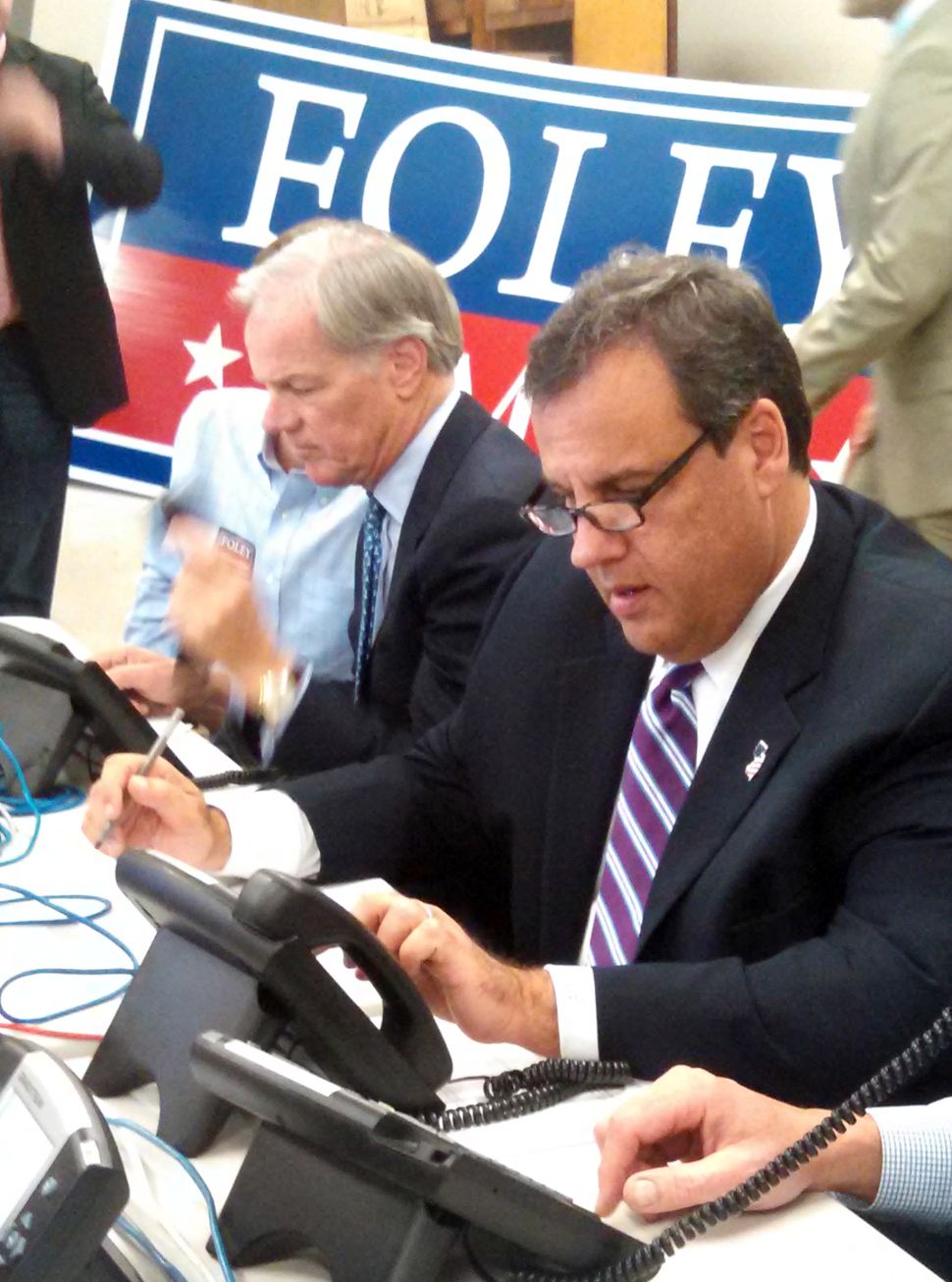