WAYNE, PA – They said Gov. Chris Christie had come to bring the star power to Pennsylvania, to breathe fire into the struggling incumbent governor’s campaign there, and that he did today, commanding the stage on a bucolic Valley Forge Military Academy and College campus where he appeared this afternoon to stump for Republican Gov. Tom Corbett.

“Now I want to talk about choices. Because elections are choices,” Christie began, with bleacher-fulls of Academy Cadets sitting stiff in red and black suits at his front and back.“Now you have a choice in this race, and I want to talk about what that choice is. Now Tom’s in trouble. I guarantee you what [his opponent] would do. He is going to make Pennsylvania unaffordable. You can take that to the bank. He is a guy who knows how to do only one thing — raise taxes.”

That opponent is Tom Wolf, the Democratic hopeful challenging Corbett in this year’s gubernatorial race and doing a fairly good job of it. Recent polling shows the Democrat, while relatively unknown among most voters earlier this year, now holding a strong lead over the Republican. Political observers chalk that lead up to differences in policy positions and political records — but also other traits, like personality and charisma, something Corbett lacks but which Christie clearly ventured to offset today.

Christie, technically present under the auspices of his chairmanship with the Republican Governor’s Association, held no punches when it came to talk about Wolf, a businessman and former Secretary of the Pennsylvania Department of Revenue. Corbett and Wolf most recently sparred in a televised debate last night, and the race’s primary battleground issues have centered on jobs, the economy and education — all areas that have been muddied by claims and counter-claims of failure and neglect between the Corbett and Wolf camps.

But Christie, for his part, reamed Wolf as a “liar” and compared him to Dan Malloy, the sitting governor in Connecticut (another gubernatorial contest where Christie has focused much of his support), who he’s been particularly critical of in recent weeks. He then cautioned the crowd to be “careful of elected officials who won’t tell you what they want to do.”

“Brace yourselves, I’m going to use an indelicate word — Tom’s like uh oh, what’s he going to do — I’m going to use and indelicate word,” Christie said, drawing immense cheers from the crowd throughout. “His opponent has lied about him. And there’s no other way to put it. We can pick a nicer word, but it’s a word that fits him. When he says Gov. Corbett hasn’t funded education in this state, it’s a lie. It’s an absolute lie. When he says he doesn’t care about kids in this state, it’s a lie … we cannot allow a liar to win the governorship of Pennsylvania.”

The campaign stop, Christie’s third in the state with just 26 days before its gubernatorial election, was nothing short of a grand old party in the heart of Pennsylvania’s Republican haunts — replete with country music, American flags, and local conservative voters mulling about with Corbett campaign signs in hand. It also featured much fire-and-brimstone talk about taxes and the economy, as Republican leaders took to the stage to bash their Democratic opponent in front of a crowd giddy with excitement ahead of Christie and Corbett’s entrance.

“Name one time ever in human history that a society has taxed it’s way to prosperity,” Pennsylvania’s Lt. Gov. Jim Cawley demanded of the crowd. “It’s never happened, but that hasn’t deterred Mr. Wolf.”

Corbett also took his own jabs at Wolf — who held his own campaign rally with the help of Democratic superstar Hillary Clinton at a “Women for Wolf’ event in downtown Philadelphia today.

Later, he introduced Christie, failing to resist an attempt to point out the overwhelming celebrity of the “governor across the river.”

Before leaving the stage to be mobbed by a crowd of fans fawning for selfies with the potential presidential contender, Christie challeged the crowd to “spend one hour” spreading Corbett’s campaign message to friends and neighbors, then waxed didactic.

“Elections are choices. They are choices,” he said. “But let me tell you something else about being governor. And it’s something I know and I’ve learned over the last five years and it’s something he knows and has learned over the last four. There’s lots of different things that will happen to you as governor, there’s lots of different issues that will come across your desk — you cannot anticapite when you go into that podium booth when in 26 days every issues that will come across the governors desk. The only thing you can count on for certain is the honesty and integrity of the person you put in that chair.” 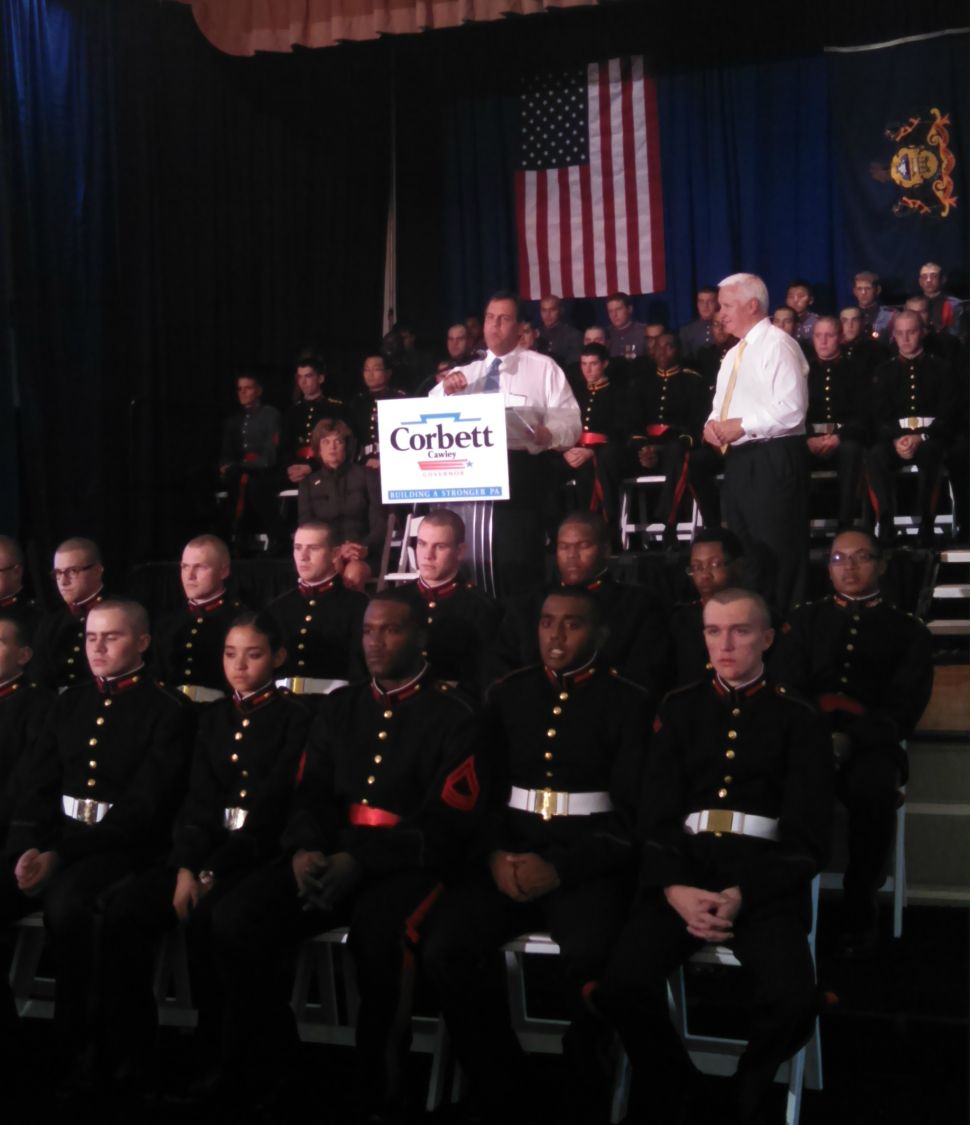