From October 21 to 25, more than 1,300 rising artists will flock to Manhattan and Brooklyn to play in some 80 night clubs as part of the CMJ Music Marathon. One of the bands to look out for is New York City-based neo soul group The Nepotist, who will perform at Rockwood Music Hall at 9 p.m. on Wednesday, October 22.

Started in 2012 by Chris and Hayden Frank, brothers from Ithaca, NY, hence the group’s witty title, Chris Frank (guitar, vocals) and Hayden Frank (bass, vocals) have distilled elements from blues, modern R&B and rock into a sound that is raw and unadorned but always creamy. In their slow-tempo songs, they leave in Miles Davis-esque pauses, giving an echoing note time to envelope the listener. And their lyrics are haunting in their directness. In the past two years, The Nepotist has already headlined at prominent spots like the Mercury Lounge and the Cincinnati Midpoint Music Fest in September.

Though The Nepotist usually operates as a duo, drummer Jacob Colin Cohen has played with them on-and-off for the past year. You might know him as the drummer who performed onstage in the 2012 Broadway production of One Man, Two Guvnors. This summer, with Mr. Cohen, the band recorded its first LP, set to come out in February. All three of them will be playing together next week at Rockwood—the place where the brothers and Mr. Cohen first met a year ago. The Observer talked with Chris and Hayden Frank about their creative processes, New York City and the convergence of music and nepotism.

Since you guys are brothers, did you play a lot together while growing up?

Chris: We had both been musicians for a long time, but we actually played in separate bands in high school and didn’t play together all that often. It wasn’t until I was out of college and Hayden was in his last year that we were like we should really try to make this happen. It just seemed like there was a lot of potential to do a sound that was better than either of us could do alone.

Hayden: I’ve always, as a bass player, been really drawn to old R&B and soul. A lot of people don’t think of the bass as the lead or as a difficult part of the song, but in those songs the bass is really leading with the drums. So it was cool to work with Chris because he had no experience with that music, but he also had experience with a lot of music that I didn’t know. So we tried to figure out where they could meet in the middle.

Chris: Yeah, I was really into folk and blues. I loved older pop from the ’60s and ’70s for the lyrics and melodies. I love music that sounds raw and has a lot of space left in it.

Was it difficult to find where your different tastes in music met?

Chris: Definitely. When we started out, I think it sounded more like straight rock music. And our lyrics were a lot more obscure.

What would be an example of an obscure lyric?

Hayden: (Laughing) There are a lot to choose from.

Chris: What was the one from “First Snow”? It was something like, “I walked through somebody’s backyard, staring through the windows, the dog knows, don’t worry I too stand guard.” I don’t think we ever put it out. I think it’s scarier for me to write simpler lyrics because they reveal more of where you’re at, and that can be embarrassing because what if people think where you’re at is stupid? But I’m less scared to do that these days.

Can you guys talk about your processes for writing music?

Hayden: I think you can definitely tell from Chris’ lyrics that he’s a philosophy graduate.

Chris: Well, actually, music is kind of the anti-philosophy for me. Every song I’ve ever tried to write that starts out with a concrete idea has turned out very bad. So with songwriting, I try to get inside a feeling that I don’t really understand yet and express it. To just feel—that’s one of the things I love about playing. It’s one of the reasons I need to play. In other parts of my life, I can over-think everything. In music, when I’m not over-thinking it, that’s when it works for me.

Hayden: I actually go in the other direction when I’m writing a song. In my daily life, I’m a pretty emotional creature, and when I’m writing I try to take a step back and write about more thematic things. But I’ve only recently begun writing lyrics so I don’t have an oeuvre yet. I definitely start with the music and hum some gibberish and see if that sounds like words. And then, from there, I see what the words seem to be about.

What would you do with a free day in the city?

Hayden: I’d get up, make coffee and drink it on the little patio that’s outside my apartment, and look at birds and worms and stuff. I really like just walking around and watching people and playing with people’s dogs too. There are a lot of really good dogs in New York. So I’d go and I’d find them. And then I would do some bass in the afternoon and drink some tea.

Chris: My day would be pretty similar: wake up and make coffee, play some guitar. Then I’d take a walk and usually, if I’m walking around by myself I’ll start singing song ideas. I love walking around in New York cause if you walk around Ithaca singing to yourself people will look at you funny. Then I’d probably sit somewhere and write for an hour or so. Then I’d cook a really simple dinner—or go somewhere I’ve never been before. 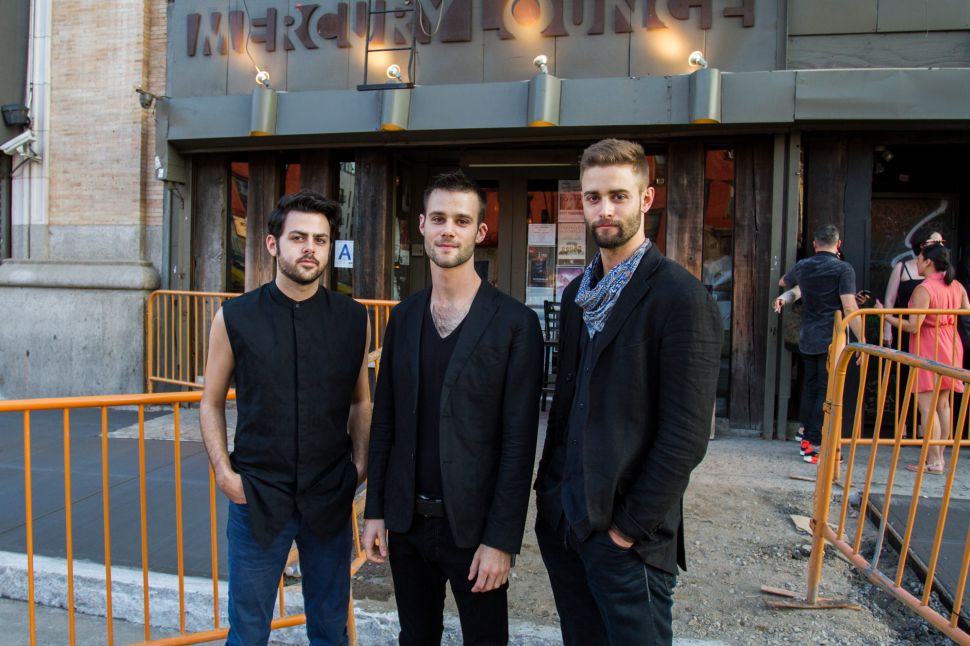