Criticizing federal health guidelines for not going far enough, Governors Andrew Cuomo and Chris Christie announced this afternoon that airports in New York and New Jersey will institute mandatory quarantines for all travelers who had direct contact with Ebola patients in Africa.

After a Manhattan doctor who treated Ebola patients in West Africa fell ill here yesterday, the New York and New Jersey governors–who often collaborate on matters of public safety–said that their states needed their own stricter standards because of their high population density.

“We believe it’s appropriate to increase current screening procedures from people coming from affected countries,” Mr. Cuomo, a Democrat, said at a press conference at the new 7 World Trade Center. “In a region like this, you go out one, two, three times, you ride a bus, you could affect hundreds and hundreds of people.”

“The stakes are just too high,” he added. “This region is a little different than most places.”

Dr. Howard Zucker, New York State’s acting health commissioner, said anyone–including medical professionals–who had direct contact with Ebola patients in Africa would be put into a mandatory quarantine for 21 days, the amount of time Ebola stays in the body. This goes beyond what the Centers for Disease Control and Prevention recommends–both governors said they had spoken with the CDC and insisted they were in their full legal authority to bolster their states’ screening procedures.

All individuals with travel history to the affected regions in West Africa, where Ebola has killed thousands, will be actively monitored by health officials and if necessary quarantined, Dr. Zucker said. Extensive interviews will help determine whether a traveler will need to face a quarantine and the protocols will impact travelers at John F. Kennedy and Newark Liberty Airports.

This afternoon, Mayor Bill de Blasio made no mention of mandatory quarantines for other travelers from West Africa. The Manhattan Ebola victim, Dr. Craig Spencer, is under quarantine at Bellevue Hospital.

Mr. Christie, a Republican, took further aim at the CDC for their their “continually changing” guidance and said states were learning on the fly how to handle the virus.

“We’re learning every day,” Mr. Christie told the Observer in response to a question about why these stricter standards weren’t put into place earlier. “Quite frankly, I think the states are becoming more assertive and affirmative in this regard.”

Despite the stricter standards the governors rolled out, Mr. Cuomo strained once again to reassure the public that they should not panic about Ebola’s spread. The virus, transmitted through bodily fluids and not airborne, has only killed one person in the United States–an aide eagerly reminded reporters Mr. Cuomo took the 1 train, one of the trains New York’s first Ebola victim, Dr. Spencer, recently rode on, to the press conference.

“I’d also like to remind everyone while this is a difficult situation and Ebola is a frightening virus, there’s also no doubt we’ve gone through many frightening situations,” Mr. Cuomo declared, ticking off a list of viruses like HIV, SARS and H1N1. “We’ve had many diseases that we’ve dealt with.”

Mr. Cuomo even mocked the idea of travelers from West Africa voluntarily quarantining themselves.

“A voluntary quarantine, no, it’s almost an oxymoron to me,” he said with a smile. 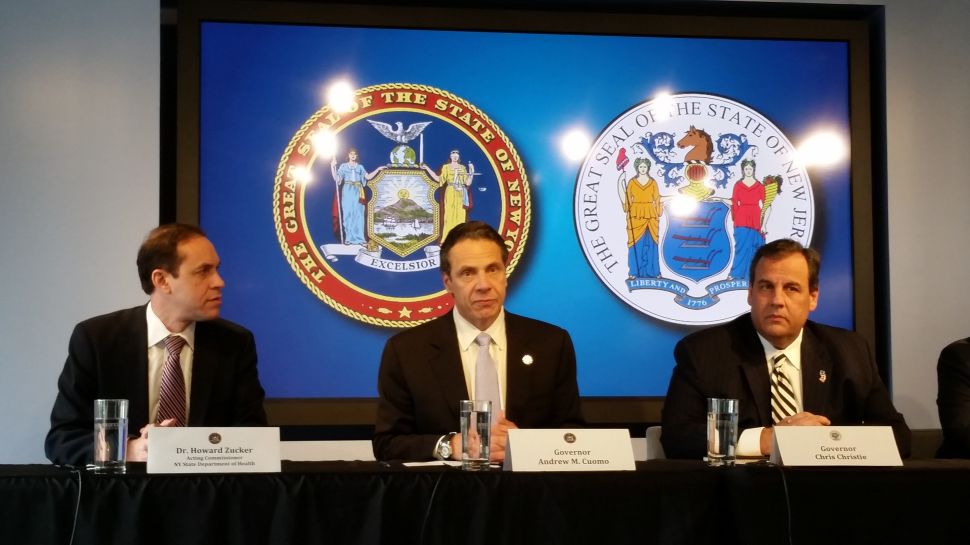