Gov. Andrew Cuomo today rolled out a plan to create a broad and consistent system for handling allegations of sexual assault on State University of New York campuses.

The plan–which the SUNY Board of Trustees immediately and unanimously voted in favor of at the meeting this morning with Mr. Cuomo–would require all 64 state college institutions to come up with a uniform definition of sexual consent, a uniform amnesty policy for related drug and alcohol offenses for assault reporters, a universal “Sexual Assault Victims Bill of Rights,” a system-wide training and education plan for students and school law enforcement and an all-campus-encompassing school policy for reporting sex offenses and for assessing the environment for victims at all schools. The schools will have to hammer out the exact details of such a system by March 2015.

Mr. Cuomo called it a vital move to combat the epidemic of sexual violence against collegiate women, pointing to studies showing that one in four women will be the victims of a sexual assault while enrolled in an institution of higher learning, but only five percent report such incidents. The governor blamed the problem on varying standards of what qualifies as sexual consent, and on schools attempting to protect their public image by trying to resolve claims of assault internally.

Mr. Cuomo added, however, that the plan would give victims the right to decide whether to go to the police or to allow the college to handle their complaints without involving the authorities. The governor said that the policy SUNY approves will–after three to five months–become the blueprint for a bill setting standards for handling sexual assault allegations at colleges across the state, public and private alike.

“What I would hope is that from this example, and from this experience, we develop a state law, and we pass that law and it will cover every school in the state,” said Mr. Cuomo. “If it goes well on the SUNY system, then we will codify it and then hopefully pass it as a law in the state, so it is imposed on all schools, public and private.”

The plan won plaudits from the 18-member SUNY Board of Trustees, 15 of whom are gubernatorial appointees. SUNY Chairman Carl McCall had particularly plangent praise for the proposal.

“This is an important effort for the students of this state to know we’re working together not only to educate our students, but to protect them,” he said.

Assisting SUNY in the effort to create the new formula will be former Manhattan assistant district attorney Linda Fairstein, who among many cases oversaw the conviction of five teenagers in the famed “Central Park jogger” case–convictions recently overturned, with a $41 million settlement in the works for the accused. Ms. Fairstein also served as an adviser in the high-profile sexual assault cases of Michael Jackson, Kobe Bryant and Dominique Strauss-Kahn.

Ms. Fairstein characterized the plan as a sort of pro-active, pre-emptive measure.

“In my experience, this only happens after there has been a crisis on campus,” she said. “This is a really brilliant way to approach it.” 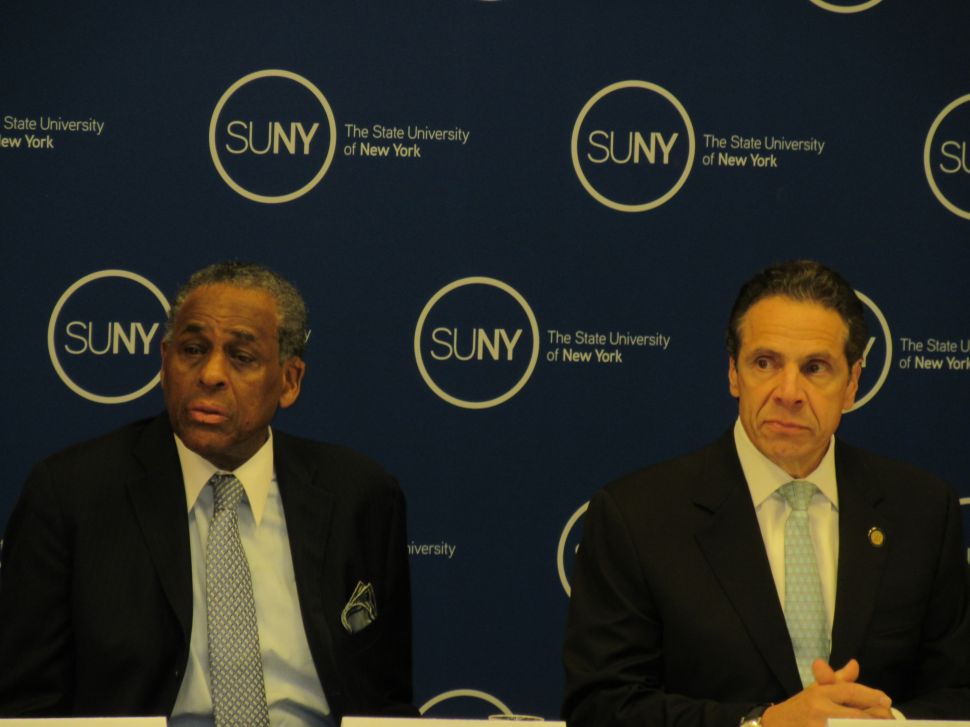