It’s the first time Mr. Cuomo’s longtime girlfriend, television chef Sandra Lee, or his children from a prior marriage have appeared in a political ad.

“This is an issue that’s important to them and they wanted their voice heard, and they’ve been very active in organizing the women’s equality agenda, so they wanted to be part of it,” Mr. Cuomo told reporters after the John Jay College rally, which drew about 200 supporters.

Mr. Cuomo is at the top of the Women’s Equality Party ticket, and the party was rolled out this summer Mr. Cuomo and his candidate for lieutenant governor, Kathy Hochul, faced a tough primary challenger from Zephyr Teachout. The slate is dominated by men, something critics have pointed out in arguing the party is a cynical election-year ploy. But Mr. Cuomo said he sees women’s issues through his daughters.

“Part of my motivation is about them — I’m a man, this is about women’s rights. And I see a lot of those, I see a lot of the consequences through my daughters,” Mr. Cuomo said. “And when you look at those statistics, of the statistics about how women are prejudiced and how women are discriminated against in our society, it frankly pains me that that should happen to my daughters.”

The advertisement features each of the governor’s daughters and the recognizable Ms. Lee speaking about issues central to the 10-point women’s equality act, like equal pay, ending sexual harassment and protecting a woman’s right to choose, and urging voters to vote on the Women’s Equality line to help establish the party for future elections.

“And let’s pass a women’s equality agenda, to treat women fairly, for my family, and for yours,” Mr. Cuomo says in the ad, which begins airing on television today.

The spot was introduced at the rally by former Council Speaker Christine Quinn, who has been a fixture on the “Women’s Equality Express” bus tours Mr. Cuomo and Ms. Hochul have taken across the state.

“I’ve really never seen one so personal, so impassioned, and so from the heart as the ad you’re going to see now, and I think this ad says it all about why we have to win come Election Day,” Ms. Quinn told the crowd, which had been warmed up with a women-focused playlist of pop music before the pols took the stage.

The ad was one of two videos shown at the rally. Another showed two newborns next to one another, and noted how the two could be raised just the same, but one would earn less, be more likely to be a single parent and live in poverty and less likely to become a CEO — all because the baby was a girl. Mr. Cuomo said that video, too, spoke to him as a father.

Throughout the rally, speakers sought to paint women’s rights as a personal issue, rather than a political one — something all but “ultra-conservatives,” as Mr. Cuomo called them, supported. Mr. Cuomo said in the past, the state had been home to moderate Republicans — like pro-choice Gov. George Pataki — but painted his opponent, Westchester County Executive Rob Astorino, much further to the right.

Mr. Astorino and Republicans in the State Senate have opposed the Women’s Equality Act based on its tenth tenet — enshrining into state law the 40-year-old Roe v. Wade decision giving women the right to an abortion. Mr. Cuomo said opponents to the legislation “will not stop until abortion is illegal.”

“The ultra-conservative tail is wagging the Republican dog,” Mr. Cuomo said of Republicans in the state.

Mr. Cuomo said that stance spread to other issues as well — pointing to GOP opposition to marriage equality and gun control, and pointing to Mr. Astorino’s reported support for marksmanship classes in some school districts.

“My opponent says we should teach children in schools how to use guns. Can you believe that?” Mr. Cuomo asked, to plenty of booing from the crowd.

As they often have when it comes to women’s issues, Mr. Astorino’s campaign pointed to the governor’s support of Assembly Speaker Sheldon Silver, who oversaw a taxpayer-funded settlement to women alleged Assemblyman Vito Lopez had sexually harassed them.

“Andrew Cuomo never ceases to amaze: He protects Sheldon Silver from prosecution in the worst Albany sex assault coverup in state history, and then has the temerity to say he champions women’s rights. When sex assault victims needed his help, Mr. Cuomo protected the old boys network instead,” spokeswoman Jessica Proud said. 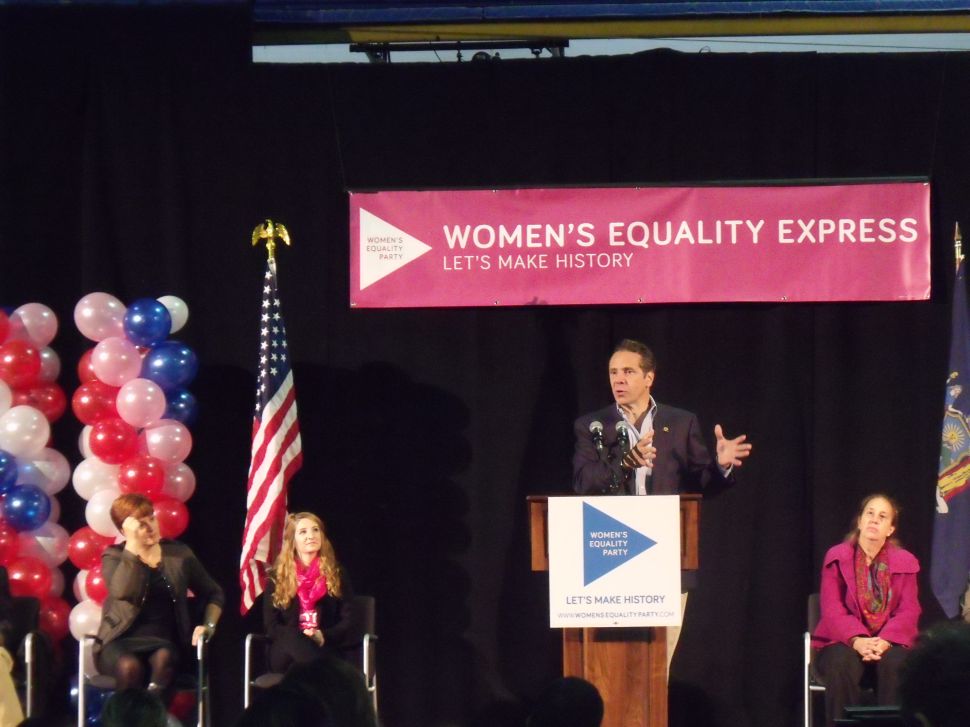