Another conventional saga about a small, isolated and battered group of GIs fighting the Nazis, the familiar, action-packed Fury does little to suggest an independent vision, but in his own sure way, writer-director David Ayer does raise questions of morality in war among men who are supposed to be on the same side. It never scales the cinematic heights or reaches the same groundbreaking level as Saving Private Ryan, but it’s intensely ferocious and relentlessly rough on the senses. You’ll  know you’ve been to war, and not on the Hollywood front.

Set during the final days of World War II in the muddy trenches behind German lines when the allies were advancing toward Berlin and suffering staggering losses, it tells the story of a small battalion of brave soldiers who lose most of their combat unit in an enemy slaughter, leaving four survivors who confiscate a German tank and call it “Fury.” What’s left of the unit is commanded by a stressed-out Sgt. Don (“Wardaddy”) Collier (Brad Pitt, in a role that serves as a close kin to the killing machine he played in Inglourious Basterds, minus the humor) who bears the scars of many defeats but will die before he surrenders or shows even the slightest evidence of weakness. In addition to his three hardened crew members—the cocky, scripture-quoting “Bible” (Shia LaBeouf), the Mexican driver “Gordo” (Michael Peña) and the violent Cajun roughneck “Coon Ass” (Jon Bernthal)—Wardaddy now inherits an inexperienced kid named Norman, a young desk typist who has only been in the army eight weeks and is already assigned to the front lines as an assistant driver.

Norman (well played by the 22-year-old standout Logan Lerman, who made his mark as the teenage George Hamilton opposite Renée Zellwegger in My One and Only when he was 17) is not only terrified to the point of vomiting at the carnage that bloodies the battlefield around him, but a dedicated pacifist who refuses to kill another human being, even in self-defense. What there is of a plot between violent skirmishes and explosions centers on how Norman changes from a clean-cut, baby-faced innocent into a scruffy, filthy cog in the rusty war machine as a first-class soldier, how he learns to trust and depend on Wardaddy, and how the other members of the team learn to grudgingly respect the kid, too. “Ideals are peaceful, history is violent” is the talisman Wardaddy lives by, and it’s a brutal education for a lost boy who finds death around every corner. Even his one tender sexual encounter when he loses his virginity with a sweet German girl who is then nearly raped and murdered by his comrades ends in tragedy.

After more than two hours of cussing and fighting and killing, Fury culminates in a scorching finale between the outnumbered survivors inside the seriously disabled Fury and a marauding army of superior, heavy-armored enemy Tiger tanks that takes the breath away. The sequence did not move me as deeply as the Normandy landing in Saving Private Ryan but nevertheless remains fixed in my memory as a powerful evocation of the horror and chaos of combat. Director Mr. Ayer, who has previously concentrated on films about the L.A.P.D., carefully researched every incident in Fury, establishing a tense balance between the corpses piling up under machine-gun fire and the rare moments of quiet that reflect fear, homesickness and boredom among the troops. The characters are mainly war-movie stereotypes, the dialogue consists of illogical sound bites (“You’re a dog—all you understand is the fist and the boot!), and that overwrought macho ending, where the outnumbered Americans take on what looks like the whole damned Nazi army, is the closest thing in the movie to a Hollywood cliché.

Still, the actors are all good, Mr. Pitt moves even closer to iconic stardom, and young Mr. Lerman steals the picture as the camera lens through whose eyes and veins we share every dehumanizing experience. Purists may squabble, but if you’re a history buff or a pushover for the sight of a man engulfed in flames who shoots himself through the head before he burns to death, you’ll go away from Fury sated. 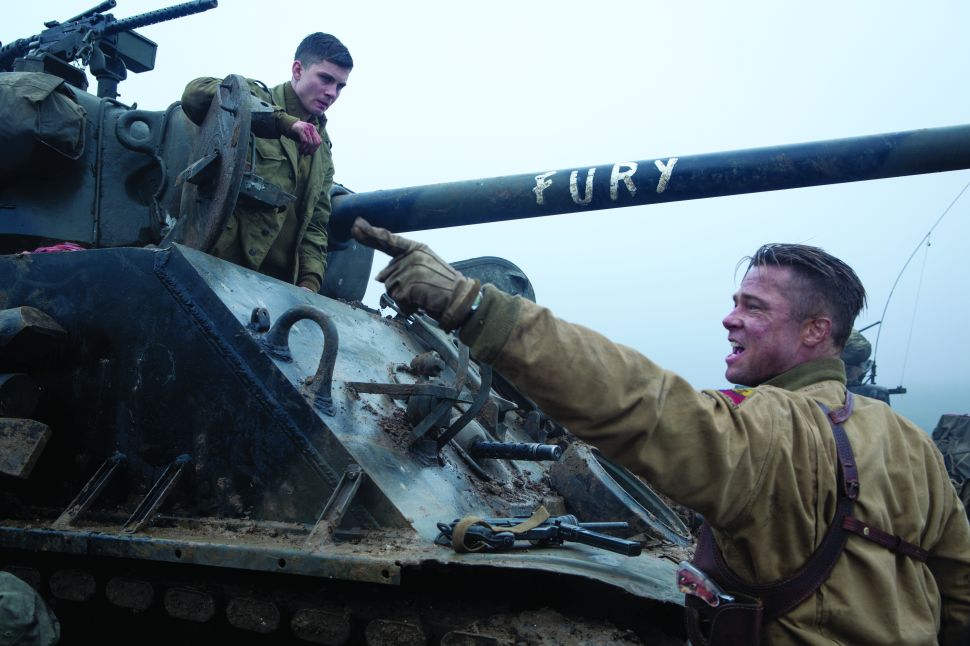