Mayor Bill de Blasio is one elected official who won’t be protesting “The Death of Klinghoffer.”

The Democratic mayor blasted one of his predecessors, Republican Rudolph Giuliani, for leading a protest against the controversial opera, which some critics say is anti-Semitic.

“The former mayor had a history of challenging cultural institutions when he disagreed with their content. I don’t think that’s the American way. I think the American way is to respect freedom of speech, simple as that,” Mr. de Blasio told the Observer at an unrelated press conference in Queens.

Mr. de Blasio said he hadn’t seen the opera–a critically-acclaimed account of the real-life murdering of a crippled Jewish man at the hands of Palestinian terrorists–but argued that attacking the opera was a wrongheaded way of expressing despair about anti-Semitism in America and worldwide.

“I don’t want to judge something that I haven’t seen. I think that there’s a serious problem today in the world that has nothing to do with this opera. I’ve spoken about it many times,” he said. “There’s an anti-Semitism problem in this world today, particularly in Western Europe that worries me greatly. That’s where my focus is.”

“I don’t think an opera is what the focal point should be right now,” Mr. de Blasio added.

Mr. Giuliani, a known opera buff who has been highly critical of the new mayor, and Mr. de Blasio, a liberal Democrat, are not close. Mr. Giuliani did not attend Mr. de Blasio’s inauguration and a young de Blasio was a staffer to Democrat David Dinkins, the mayor Mr. Giuliani unseated in 1993.

When Mr. Giuliani was mayor, he waged a war with the Brooklyn Museum over an exhibit that showed the Virgin Mary partially covered with elephant dung. Calling the exhibit “sick,” the Republican mayor and proud Catholic threatened to withdraw City Hall funding from the Brooklyn Museum, a move that was widely criticized.

In addition, the mayor warned of trying to censor works of art that politicians do not find agreeable.

“The only think I know about the opera is that the Metropolitan Opera House has a right to show it,” he said. 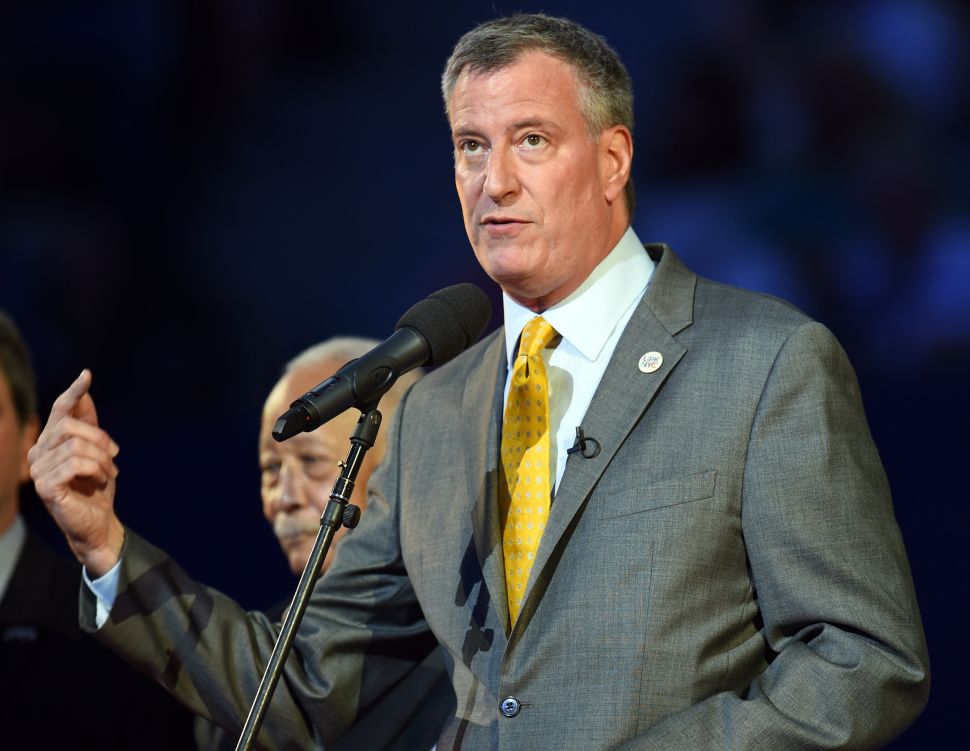