What place in New York would readers not expect to find Dick Cavett? Like the Russian baths on 10th street. Does Dick Cavett schvitz? The what?

The spa where they beat you with oak leaves before a massage. I thought you were going to say, ‘Do you go to the Russian Tea Room?’ They ruined it. That used to be about the best place in New York. The last time I was in it, if you don’t mind a casual name-dropping, I was able to inform Alec Guiness, because of my anagram curse, that his name re-arranged spells genuine class. Spiro Agnew being grow a penis are among two of my favorites.

You bravely revealed struggling with depression before it was fashionable. By exposing your vulnerability, did you coax secrets from guests on your talk show? I don’t think I ever consciously thought of it that way. You enlightened me a bit there. I can remember the feeling of taking the conversation with somebody on the air away from, say, just a factual level, and that did cause them to do the thing that many people would say after the show: ‘I don’t know how the hell you got me to talk about this or that.’

You criticize your former boss Art Linkletter and write that it is “remarkably easy” to speak disrespectfully of the dead. Slag off another dead person. Just this week I was on somebody’s radio show and someone called up and said I shouldn’t speak disrespectfully of the dead. And it’s so easy to go to the obvious thing and say ‘O.K., you’re right, of course, and we’re going to talk about Hitler later.’

We can all agree on Hitler. Why is it that in almost any conversation people go to Hitler? I suppose that’s true. I hate to go to Hitler because it’s such an overworked reference as an example. He’s too easy. Change it to Goebbels or Himmler.

I’ll admit something to you; I never found Joan Rivers funny. As impossible as it to believe, there was at least one stupid woman in Ohio who never found Jonathan Winters funny, according to a letter she wrote.

Joan Rivers and Jonathan Winters are night and day. Groucho said about [Winters] once, ‘Now there’s a giant talent.’ He loved Winters. But closing on speaking ill of the dead, I certainly plan to with Dick Cheney. I’m mourning him now.

You often write about your dad—I’m surprised how often he’s come up. I imitated my dad, sweating bullets, to fool a policeman. A bunch of us had busted somebody’s beautiful etched glass window with a brick. The cops came, rounded us up, and we all denied it except one guy who finked. And when we learned that, we had bad dreams right out of Crime and Punishment. One day, I thought, ‘Maybe I can save this.’ I told [the officer on the phone] I was Alva B. Cavett, and that the boys were repentant and going to pay for the window and I said, ‘You handled this beautifully.’ If I had not fooled that policeman because of my freakish deep voice as a kid, I might not have gone to Yale if that had been a public police record. That could have knocked me onto the reject list and you and I would not be talking now. 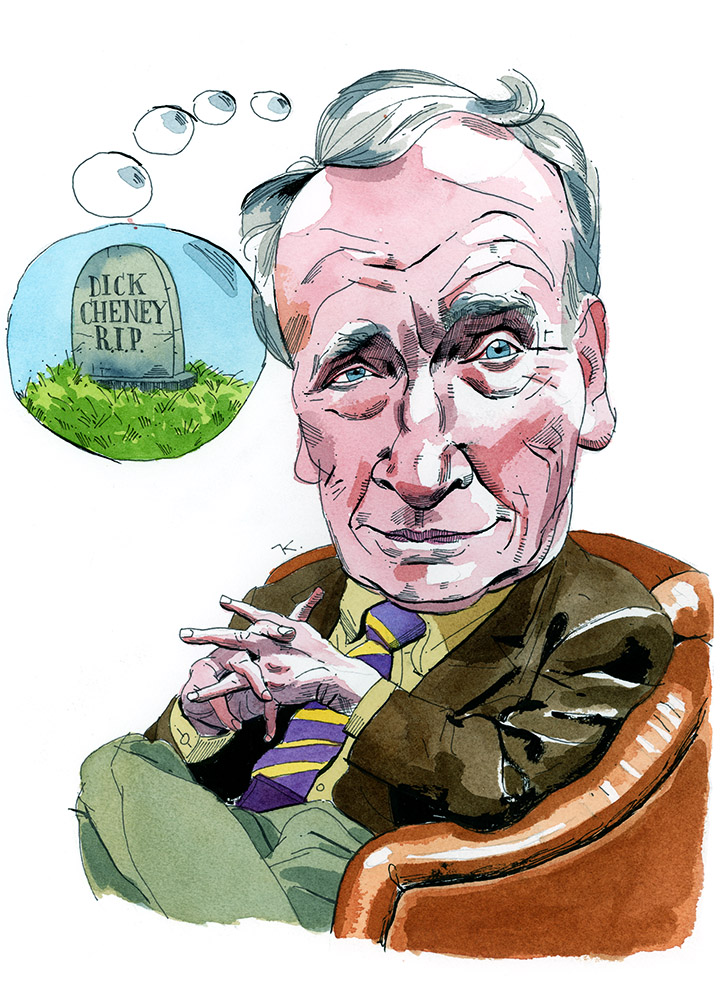