At its heart, the message of Doctor Who has always been a rather counterintuitive one: Talk to strangers.

The show has its dark themes, for sure, and nobody on it is ever completely safe. But when you get right down to it, it’s telling us to just go for it. Go with the crazy man you just met, step into his blue box that looks impossible to fit inside, let him take you away to god knows where and god knows when. Because if you do, if you trust him even though you have absolutely no reason to trust him, you will be rewarded—you will see wonders.

It’s a marvel that parents let their kids watch this stuff. The stories we tell children, after all, are usually built around the exact opposite message: the world is scary place. Don’t talk to the wolf. He may seem nice, but really he just wants to eat you.

Now that we’re nearing the end of a (pretty spectacular) season that has been thick with stories about the relationship between fear and myths, it was time for Doctor Who to come out and tackle this strange theme head-on. To ask: What if the thing that goes bump in the night is actually the best thing that ever happened to you?

So we begin, of course, with Little Red Riding Hood. Only this time around her name is Maeve Arden, and she is a very wee, slightly schizophrenic girl in the eighth grade at the Coal Hill School. She’s lost in the forest, and something is chasing her. The forest is actually right smack in the middle of London, and it has grown up overnight while her class was on an overnight field trip to the Natural History Museum, chaperoned by Clara and Danny.

Lucky for her, she finds a blue box. The new forest has, in fact, grown up all over the world, not just in London, and the Doctor is stymied. He’s great with digital/mechanical stuff, but vegetation doesn’t yield to his sonic screwdriver. The Earth is under attack by trees and he can do nothing about it.

After much running around, dodging wolves and tigers that were set free when the gates of the London Zoo came down, they finally discover what’s going on—sort of.

Turns out that there is a huge solar flare coming, large enough to wipe out the whole planet. And the only person who knew that was Maeve, who is not actually schizophrenic but extremely perceptive, because she has spent the last year searching for her runaway older sister. No, seriously. Because obviously that is how that works: kids who miss their sisters develop psychic powers over time.

Anyway, Maeve is able to hear the voices of the trees, which look like little lightning bugs and have apparently come to take over the Earth now that all of its inhabitants are about to die. Oh, because they’re also fireproof trees, which the government learns when it tries to burn paths to get traffic through.

So: everyone is gonna die. The Doctor offers to save the gaggle of kids, but Clara’s like, um, where are you going to leave a bunch of 12-year-old orphans in the universe? He offers to save just Clara and Danny, but Clara knows Danny—who comes off as just the best, smartest, nicest guy in this episode, and Clara the lying liar who lies clearly does not deserve him—will never abandon his charges like that. He offers to just take Clara, and then it is like she suddenly sees for the first time who and what the Doctor really is: alone. And she doesn’t want that for herself, to be the last of her kind in the universe.

So she makes yet another extremely Clara Oswald-like decision. She sends the Doctor off, absolves him of his guilt, tells him to remember Earth and live to fight another day, while she and Danny and the rest of humanity die noble fiery deaths.

This is all very silly, its silliness compounded by the swelling score that backs it all up, because we can all see what is coming from miles away. This whole story has been a parallel to the Doctor’s own: he’s the big bad wolf who turns out to be the prince. And similarly, the forest, always the site of fear and the unknown in fairy tales, is actually the savior. Alone on the Tardis at last (it’s been overrun with gleeful children for most of the day), the Doctor suddenly sees it clearly: the trees are creating a huge excess of oxygen for the solar flare to burn off harmlessly.

So the kids have to come up with a plan to make sure the government doesn’t use herbicides before the trees can save them, the flare doesn’t destroy the earth, and then the trees all disappear into swaems of lightning bugs, and everything is back to normal. Well, except for all the buildings that were clearly destroyed by the forest that sprouted overnight.

Oh, and Danny knows that Clara has been lying to him about continuing to Tardis-hop, but he’s more bemused than pissed. Missy—yet another mythological villain—shows up again to marvel at the unexpected turn of events. And Maeve’s missing sister just shows back up after a year, because…of the forest, I guess?

It’s a goofy coda to a generally rather flat episode. It starts out pretty strong, with the fun fairy tale references and scenes of tigers running around London. But the end is a letdown. The answer to the episode’s riddle is far too simplistic; it doesn’t earn its tug-at-the-heartstrings moments, and it doesn’t address the key question in any but the most superficial way. What does it really mean that you should trust strangers? That we should just generally be more trusting people and stop being so guarded? What about all the bad things and bad people that still very much exist? What does this version of the Doctor, scary stranger as supreme savior, really stand in for here?

Ah well, at least we got to see the Doctor try to corral a bunch of kids as they ran around the Tardis like a jungle gym. 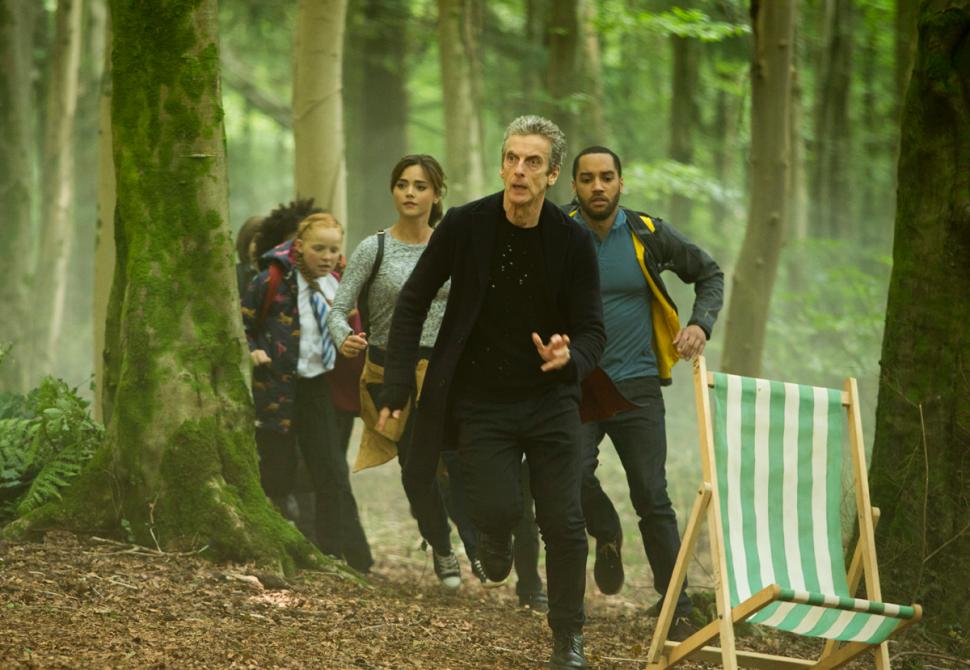