Every creative person, even if they won’t admit it, longs to be part of a scene.

Who doesn’t pine for the days of the mods in London, beats and hippies in San Francisco, freaks in the West Village, punks in the Lower East Side, or the varied speed demons in Andy Warhol’s Factory? Creating art alone can be miserable. Creating it with a bunch of your most beautiful friends is intoxicating.

The trouble with scenes, though, is that you can’t plan them; they have to bubble up from some unquantifiable combination of grit and good vibes. There’s also a more practical problem: creative types can be short on money. Without a kooky benefactor like Warhol, how is it even possible for a budding artist to subsist in New York City without a fat cash injection from mom and dad?

But at Milk Studios, there’s just such a scene growing around a trio of creative Svengalis who’ve provided a playground for the city’s young creatives. Jenné Lombardo, Keith Baptista and Mazdack Rassi have shepherded big-name designers Proenza Schouler and Public School through their MADE Fashion Week program, which has ballooned since 2009 into a biannual spectacle of art, design, music and fashion. They show no signs of stopping—in fact, this week, they’re expanding their program to provide for young musicians where record labels are falling short.

MADE, based in Milk Studios with outposts in Paris and L.A., consists of different divisions covering creative services, film, photography, digital, and, most famously, fashion. The conglomerate fuses the creative diversity of Warhol’s Factory with the business acumen of the Beatles’ late-’60s Apple Corps project.

There doesn’t seem to be any threat of structure quashing creativity at MADE, though. The founders, Jenné Lombardo, Mazdack Rassi and Keith Baptista, are reticent to even categorize much of what they do out of the eighth floor of 450 W. 15th Street, which is also the home of Mr. Rassi’s Milk Studios. Milk Studios primarily functions as a rental space for photo shoots and events.

Since its inception five years ago the tentpole of MADE is Fashion Week. Taking place at the same time as Mercedes-Benz Fashion Week, the event focuses on helping newer designers to develop their brands. Alexander Wang, Joseph Altuzarra, Hood By Air and Cushnie et Ochs have all gone through MADE’s incubator-esque mentorship program, free of charge.

But this isn’t your typical mentorship program. The same situation in the tech world, for example, would be comprised of hard deadlines, pressure to deliver, and all-night coding binges. Instead, at MADE, the program’s founders prefer to keep things amorphous. They simply use their formidable resources to bring up-and-coming designers’ brands to fruition however they can.

“The gray area in which we operate is our magic,” Ms. Lombardo said recently in an interview, “and it can’t necessarily be articulated— nor should it be.”

Milk is now the second most popular Fashion Week venue following Lincoln Center. In September, they hosted 33 presentations. Highlights were Jeremy Scott’s show, which saw models walking the runway in accessories designed by Miley Cyrus, and The Blonds, whose presentation was described on the house blog as being “Aladdin: The Broadway Musical if injected with PCP and performed exclusively in a gay bar.”

The events’ punky vibes notwithstanding, corporate partners like American Express foot the bill for MADE Fashion Week’s presentations, enabling them to put on world-class presentations for young designers without asking them for funding. Without support, these designers might have gotten lost in the shuffle while they awaited funding.

An entire scene has developed. Kids in tattered skinny jeans with Crayola hair lurk outside, hoping to get in and see a show or even just help out so they can penetrate MADE’s force field of cool. Many of them do get their chance—about 150 interns from Parsons are hired each Fashion Week, and the founders try to take in any talented young people who come their way.

“We had these two kids from Tokyo who showed up and they just wanted to intern,” Mr. Rassi said in a recent interview. “They were just, like, at the front door. And we were like, ‘Uh, O.K. Go do that.’ Milk has always been a place to support young talent. Go to our equipment room and it’s all the next biggest photographers in the world.”

Another employee, a young man from Ohio, showed up for work one day wearing a T-shirt bearing the logo of Pyrex, the streetwear brand of Virgil Abloh, the creative director for Kanye West and a friend of MADE. Mr. Abloh was there that day and saw the kid’s T-shirt. The only issue: it was a knockoff, made by the young employee and his friends.

“Instead of Virgil being upset, he was excited about it,” Mr. Baptista said.

“Virgil came out and saw the Pyrex shirt and he was like, ‘Dude, you’re the best,’ ” Ms. Lombardo said.

In 2009, the company was born when Ms. Lombardo, the current head of Terminal Presents who was then working as a MAC Cosmetics exec, called Mr. Rassi, her friend and frequent collaborator. Ms. Lombardo was concerned that up-and-coming designers wouldn’t have the funding to present their collections during Fashion Week. She worried that missing a season or two would cause them to lose whatever momentum they’d gained, and the fashion world would pass them by.

Mr. Rassi had been leasing his smaller studios to designers at negotiable prices already, he said, but after Ms. Lombardo’s call, he noticed that “none of the phones were ringing” anymore with calls from young designers. “They were all in trouble.”

Ms. Lombardo and Mr. Rassi thought maybe they could give the spaces away to promising young designers for free, but realized that wouldn’t be enough. The designers also would need full-scale production on the same level as established brands, they decided.

“A lot of these cheaper venues have fabric curtains and it looks like a fashion show you just did in high school,” Mr. Rassi said. “We couldn’t do that.”

So they called Mr. Baptista, a production designer who produces the biggest fashion shows in the world. Together, these three well-connected and business-savvy fashion and culture devotees founded MADE Fashion Week.

That first season, their roster included Jeremy Scott, Proenza Schouler, Band of Outsiders and Gareth Pugh, all of which showed at Milk while higher-profile shows were being held in other studios. This led editors and VIPs to stumble onto the MADE shows. Once, when Suno was showing in the early days, none other than Anna Wintour stopped by, Mr. Rassi said. She was in the building for the Joseph Altuzarra (another MADE alum) show.

“She said, ‘What’s going on?’ ” Mr. Rassi recalled. “I said, ‘We have five young designers here.’ She went through, stood in Suno for five minutes and started talking to them, then called them for a meeting.”

After a couple of years, the founders began noticing that the prestigious CFDA awards were no longer just honoring the same few stalwart American designers. Now, MADE alumni like Alexander Wang, Proenza Schouler and Mr. Altuzarra were being recognized.

One thing they’re not is an exclusively fashion-focused company. “Everybody we work with is really a collective,” Ms. Lombardo said. “They’re not like, ‘I’m a designer.’ They’re like, ‘Here is my entire tribe.’ ”

Designers at MADE sit in the front row of each other’s shows—something you won’t see at Lincoln Center or at the shows of more established brands. They bring packs of friends with them who are interested in music, design, architecture, every facet of creativity.

With that in mind, MADE Music will bring eight to 10 new musicians from genres including hip-hop, rock and EDM under its wing and help them to develop musically. Also, with help from American Express, they’ll be teaching the musicians how to view themselves as small businesses. Basically, they’ll be stepping in where record labels have stopped providing for musicians in recent years.

“It’s our intuition to respond to where there are voids in the marketplace,” Ms. Lombardo said. “We found we had a proven track record of finding musicians throughout the course of our five years and our careers.”

They feel the music industry is in a state of confusion similar to that which faced young fashion designers in 2009.

It couldn’t come at a better time for the New York City music scene, which, while it isn’t dead, is at least decentralized. With the closures of Manhattan venues like the Roseland Ballroom, Sullivan Hall, Kenny’s Castaways, Don Hill’s, The Bitter End and CBGB over the past decade, music in Manhattan started to seem endangered.

“We have a lot of assets for musicians,” Mr. Rassi said, adding that the founders have heard from artists that labels lack support, and from labels that artists lack development. “Wow, it’s a perfect storm. We should do what we do.” 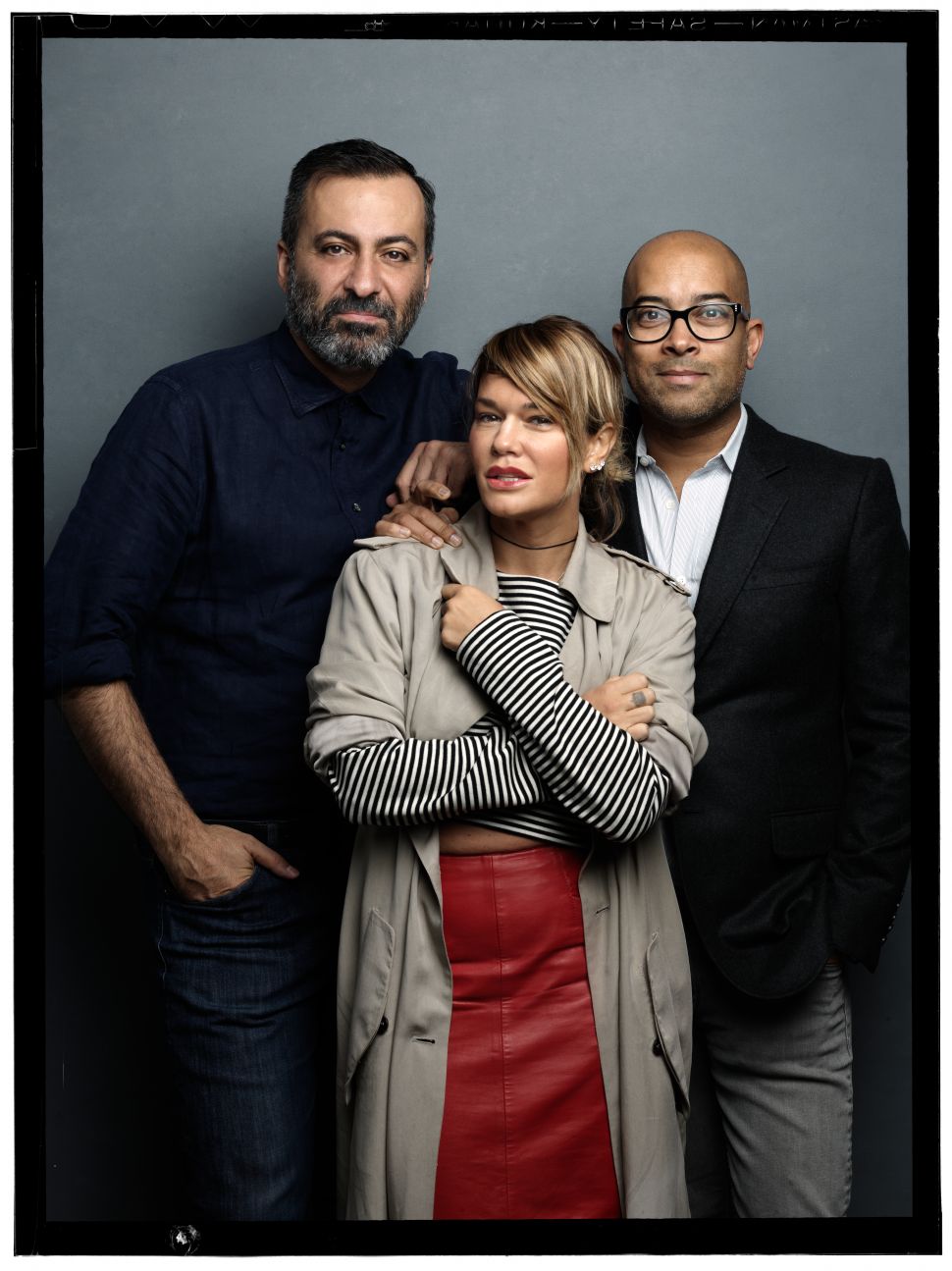