When the editor in chief of High Times hands you a joint, you are probably going to get very stoned.

“Are you trying to … talk?” asked Dan Skye, the editor of the ganja green magazine, who was clad in a pot-leaf patterned dinner jacket. We were standing on the smoking balcony of Lower East Side lounge The DL last night at the marijuana mag’s 40th anniversary celebration. We giggled. A lot. Were we trying to talk? We suppose. When you really think about it, aren’t we all just trying to talk, man? The line between thoughts and words was already getting blurry.

Out on the crowded smoking balcony, past someone painting edible gold on the celebratory cake and a woman hula hooping and twirling a baton with trippy lights, the smoke rose, fragrantly, into some really far-out shapes. Whoa … have you ever thought about, like, shapes? Dude …

Bouncers came out at regular intervals to remind the crowd that the smoking section was just for cigarettes—total buzzkill. But people laughed, then lit up some more. It was, after all, a party for a magazine has been subverting authority for four decades, fighting The Man by just getting groovy, brother.

High Times, which started in 1974 as a Playboy parody, has shown surprising stamina, transforming from something the kids read with stoner high school pals while blazing some chief dank, to this righteous revolutionary thing, brah, tackling issues of legalization and decriminalization. Like the industry it covers, High Times has gained cultural acceptance over the years.

But it can still throw just the chillest party.

Upon entering, we were festooned with a plastic pot-leaf lei. The decorative motif continued upstairs, where a cannabis-shaped piñata hung over the VIP section and the Cannabis Cup was prominently displayed over the bar. Matches with the magazine’s logo were scattered around the room like rose petals.

We quickly downed a “Jamaican Me Crazy,” the signature cocktail. Then another. It involved rum, pineapple juice and a High Times-appropriate garnish: a Mary Jane leaf, compadre! We asked the bartender if it was real. “I mean, it’s a real hemp leaf. You can’t eat it or smoke it,” he said.

We couldn’t spot any growers, but we did spot self-proclaimed “marijuana person” Chuck Klosterman and Susan Sarandon. Ms. Sarandon, who wore the pot leaf lei like a crown, told us she had time for one question.

“So, um, do you like uh, what do you think of High Times as a magazine?” we stammered. Interviewing celebrities while on some Cheech and Chong level, it turns out, is not our strong suit.

“I don’t know about as a magazine but I think it’s just important for the culture,” Ms. Sarandon said. What culture exactly? “The culture of marijuana acceptance,” she clarified.

Inside, we ran into Ben Sinclair, the star and co-creator of the Vimeo web series High Maintenance—emphasis on high—where he plays a pot delivery guy.

“This is so weird, you’re usually… on my computer,” we exclaimed to him. Wait—what if we are all just images on a screen? What if the Internet is real life? Bro…
Mr. Sinclair has achieved a very specific level of fame in very specific circles. And that circle is the people who go to High Times party.

“I know, right?” Mr. Sinclair replied. “This is one place I know everyone will recognize me, and I’m so ready. I’m just going to ask people questions.”

Turning to Mr. Bienenstock, who now lives in Santa Cruz (where, he said, the question is whether you surf, not what you do), Mr. Sinclair asked what his days are like. They consisted of reading, writing, eating breakfast and going to the beach.

“So you’re good, man,” Mr. Sinclair said, with the exact facial expression and tone of his weed-slinging character. “What about existential angst? Do you still have that?”

Existential angst … but what does it even mean to exist in a world with angst? Can’t we just live free, amigo?

He said he did—when you’re just out there living the dream, shredding the gnar of life, you have to get heavy for a second and feel that guilt, brotha man.

We thought about how that is really true for us, too, and for all people we know struggling with first world problems, trying to just be one with all the people of this earth we love, getting back to real nature, like the trees, man, have you ever thought about how we have to save the trees, man? You’ve got to save your inner spirit, and solve the continual issue of the human condition. Like … really.

Former Howard Stern head writer Jackie “The Joke Man” Martling offered to tell us dirty jokes but ran off before we had a chance to take him up on the offer.

We asked Rick Szykowny, who is the copy director at The Nation and freelance copy edits High Times, about the house style. Although the magazine uses New York Times style, there are a host of words that the paper of record’s style manual doesn’t use too often, despite the Times’ new pro-pot editorial stance. Marijuana strains are a particular sticking point, especially a variety known as “Purple Urkel.” But that’s what copy editors are for. Wait … are we being copy edited right now?

What if all our lives are getting edited for house style? We’ve got to master the house style of planet earth, man!

“We bought the shit out of those peanut M&Ms,” we overheard someone on the patio say.

Speaking of: some much-needed munchies were passed around during hour three of the four-hour-long open bar, a departure from protocol at most media parties, and most cocktail parties in general, where hors d’oeuvres are served at the beginning. But alas, we couldn’t get to any of the munchtastic sustenance, as the crowd had a serious case of the snackattacks and scarfed it all up faster than Harold and Kumar in a White Castle. So we went to get a quesadilla after and, dude, that quesadilla, might have been … the best thing … we’ve ever eaten? 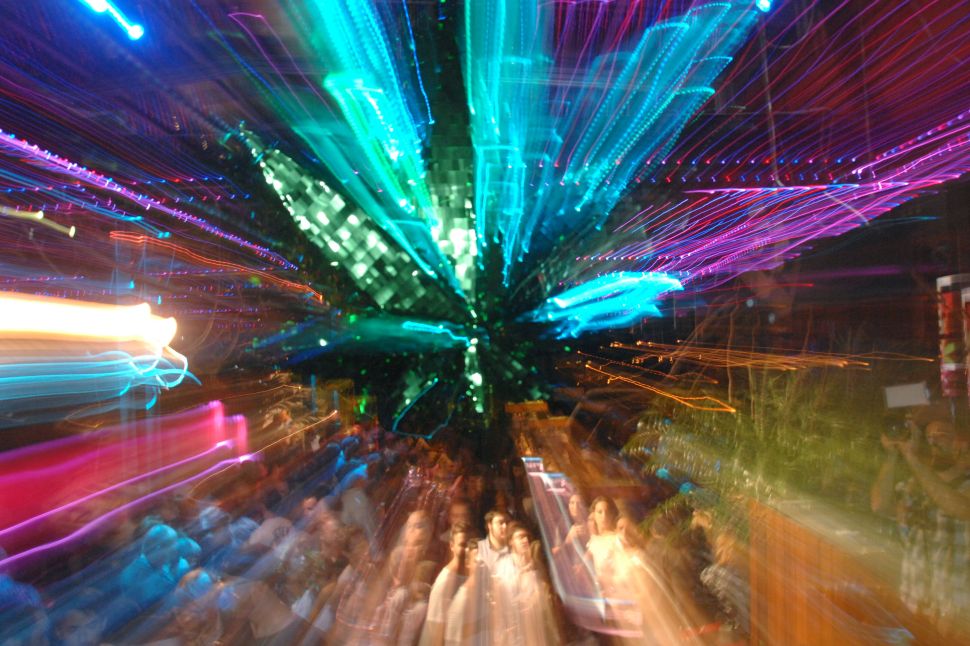